After being captivated by The KVB’s incredible new album ‘Only Now Forever’, I discovered that they were playing in nearby Bristol. A gut feeling told me that I had to go and see them live. Tonight’s show proves my instincts were right.

As well as it being my first KVB gig, this is also my very first time at The Louisiana, despite having been to Bristol countless times to watch live music. I didn’t expect it to be a pub with a performance room upstairs, but it’s in intimate venues like this that new music truly thrives. Tall, floppy haired electronic wizard Autumns warms up the full capacity crowd with a set of pounding techno that heats up the atmosphere with hypnotic repetitions and thumping beats.

It’s only a few minutes before The KVB take to the stage to a warm reception. Described as “darkwave” by some, and “psychedelic electronica” by others, the London duo’s music brings together the influences of Joy Division, OMD, the Jesus And Mary Chain, Neu! and the vast majority of the Mute Records back catalogue in a lysergic, dreamlike brew of shoegaze, Krautrock and techno pop. Having only recently discovered the prolific, restlessly creative duo via their sixth album ‘Only Now Forever’, tonight is a perfect opportunity to check out other tracks from their back catalogue. As it turns out, the new LP and this setlist make a perfect introduction to this hugely engaging twosome. 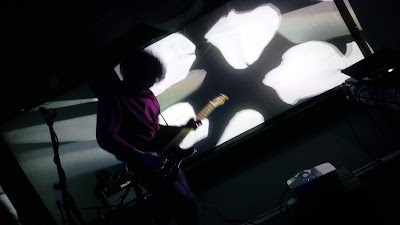 ‘Only Now Forever”s potent title track may not start the album, but its dizzying electrical rush provides the ideal opener for tonight, as its gently rippling beauty and surf vibes play against an airborne pulse covered with ultraviolet trails. The mesmerising visuals are supplied by Kat Day, who also takes command of the synths and analogue electronics, while Nicholas Wood provides voice and guitar. The sound of post punk emerges during the animated bounce of ‘Always Then’ as it buzzes along mysteriously with its lucid keys and vaporous vocals. Afterwards, the forceful, moody aura of the brilliantly efficient ‘In Deep’ offers surging, transcendental atmospherics carried along on a buoyant rhythm. 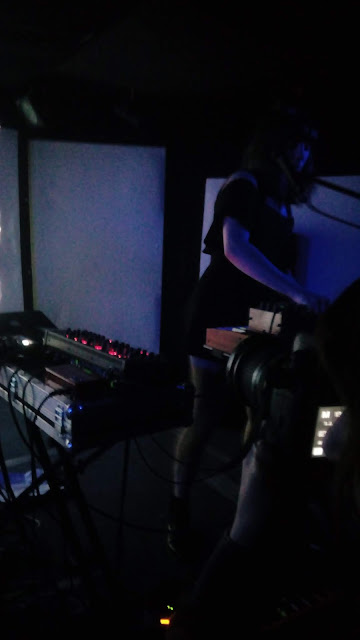 Its a testament to the strength of their back catalogue when they have just released one of the decade’s most essential records and choose to air only five tracks from it this evening. The sullen, menacing ‘Afterglow’ is one of them, where a black, slow machine groove is countered by luminous, hallucinatory tones. As well as bringing forth reverb-drenched notes, its industrial demeanour is noticeably touched by the spirit of Berlin, where Wood and Day have resided for the last five years. Creating a dense fog of an ambience, the dusky ‘Awake’ is topped with articulate touches of guitar, while the breathtaking ‘On My Skin’ provides their most romantic moment yet. Charming with the wondrous introspection tied to its graceful melody and breeze of a chorus, it’s a synthpop treasure that stands as The KVB’s most accessible offering so far.

The gorgeous, otherworldly ‘Violet Noon’ ventures down similarly calming, ethereal avenues, glowing with a sad beauty as it slows down the pace. Its blissful, aeronautical properties are complimented wonderfully by its misty chords, demonstrating how the duo’s sound is developing from the earlier material which focuses less on melody and more on mood and sound. From 2016’s ‘In Desire’, the marvellous ‘White Walls’ bathes in dazzling light as Wood’s looming vocals ring out over its disciplined kinetic patterns and analogue textures. Getting busier as it builds into a lifting cosmic sensation, it’s followed by the shadowy ‘Night Games’, where a dark, overcast climate plays home to piercing notes and delicious drum machine. 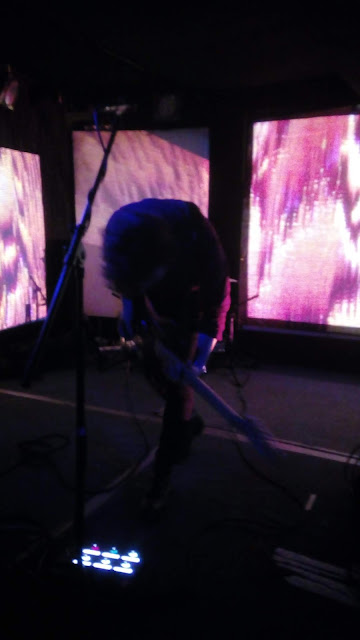 One of the pair’s biggest strengths is their unique, instinctive way of combining dark moods with colourful sounds, a quality reflected nicely by the versatile ‘Never Enough’, a song beaming with celestial elegance and a simple, melodic inclination that is fascinating in its streamlined brilliance. Slipping down another post punk passage, the propellant bassline of ‘From Afar’ drives its vibrancy while a lysergic cloud of synth drifts overhead, and the striking single ‘Above Us’ surges through euphoric passages. Its motorik shoegaze flavours collide head on with effervescent, kaleidoscopic electrical sequences, resulting in a vivid, defiant and thoroughly energising construction. The hypnotic visuals are awe-inspiring throughout the 14 song set, bolstering each track’s characteristics to achieve maximum effect, and revealing that their astonishing music is only part of The KVB experience.

Originally released in 2012, the steady, arresting ‘Here It Comes’ evokes a delicate magic in its billowing melody and voltage-powered radiance, before the set finishes with the monstrous ‘Dayzed’, where the heaving riffage and feedback-fuelled sonic assaults recall MBV at their peak. With its ominous mechanical march and intense, robust temperament, it delivers a fearsome, magnificent climax.

Wood’s intricate, efficient and dynamic guitar work is perfectly matched to Day’s technical brilliance, and their remarkable artistic chemistry is a blessing for music in 2018. The alternating measures of psychedelica, synthpop, shoegaze and electronica contained within their sound form a style that plays well with their increasingly accomplished songwriting, while the awesome graphics surrounding them brings the music to life in stunning fashion.

As a recent convert to The KVB, it’s a r 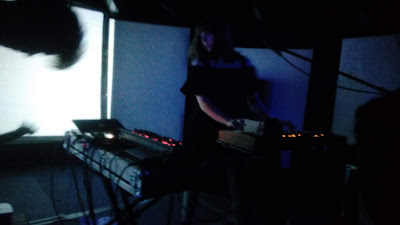 eal treat to hear some of the highlights from ‘Only Now Forever’ live and within the setting of Kat Day’s amazing visual creations. On top of this, hearing their older material for the first time is an absolute revelation.

Off I go to buy more KVB records and investigate these treasures further… You should do the same.

The new monthly XS Noize playlists on Spotify bring together the most essential new music of the last month that has been featured on the site. The April 2019 edition features tracks from Tame Impala, […]

TRACK OF THE DAY: The KVB – Violet Noon

Another wondrous track taken from The KVB’s latest album ‘Only Now Forever’. The gorgeous, otherworldly ‘Violet Noon’ ventures down calming, ethereal avenues, glowing with a sad beauty as it slows down the pace. Its blissful, […]

The Best Of October 2018 PLAYLIST + ROUND-UP

Welcome to the October 2018 edition of our monthly new music playlist, which is available to listen to and watch via YouTube. If you enjoy any of the songs featured here, we encourage you to support […]