The first concert will broadcast on St. Patrick’s Day, 17th March 2021. U2 Go Home: Live From Slane Castle celebrates the band’s return to the legendary Irish concert site on 1st September 2001 for their first performance on the banks of the River Boyne in over twenty years. And in an exclusive YouTube performance, Dermot Kennedy will open the show with a solo performance recorded last week outside Los Angeles.

On 25th March fans can tune in to see U2: Live At Red Rocks recorded on 5th June 1983 at Red Rocks Amphitheatre in Colorado, United States on the band’s War Tour. A career-defining show, the rain-soaked performance at the iconic venue helped establish U2’s reputation as one of the greatest live acts in the world. And another Grammy-nominated Dublin band, Fontaines D.C. will open the show with a performance recorded in their hometown last year.

The PopMart Tour stormed into Mexico City in December 1997 for a memorable show at the Foro Sol Stadium and 1st April will see Carla Morrison open for the band, only on YouTube, for a very special one-off performance ahead of Popmart: Live From Mexico City.

In December 2015, U2 returned to Paris less than a month after the 13th November terrorist attacks on the city for two rescheduled shows. iNNOCENCE + eXPERIENCE: Live in Paris marked the final performance on the tour, an unforgettable evening which included an emotional performance of Patti Smith’s ‘People Have The Power’. On 10th April, YouTube will broadcast the show for the very first time, with French band Feu! Chatterton on support.

"Every show is memorable for us but these four particularly so… It’s exciting to be on the road again… Embracing all the wonder of the virtual road… And especially exciting to be joined by such a brilliant line-up of fellow travellers in Dermot Kennedy, Fontaines D.C., Carla Morrison and Feu! Chatterton.” – Bono, The Edge, Adam and Larry

Dan Chalmers, Director of YouTube Music for EMEA said - “It's fantastic that YouTube is partnering with U2 for this exclusive broadcast. The four concerts featured in The Virtual Road are the most memorable and iconic in the band’s history, and indeed rock history at large. As one of the world’s best-selling music artists, U2 have been at the top of the global rock scene for the past four decades. When they perform, the world takes notice - their performances are always a landmark moment for music lovers around the world. We’re proud to be providing the platform for an artist that has come to embody the definitive live music experience.”

Sam Lunn, Head of Campaign Strategy, Island Records said - “One of the reasons U2 remain one of the greatest and most interesting bands in music is their desire to always break new ground. No band has managed to combine emotion, ambition, innovation and spectacle to produce such consistently brilliant live shows. With the announcement of The Virtual Road, and this hugely exciting partnership with YouTube, U2 are once again leading the way with this incredibly exciting virtual concert series.”

In September last year, YouTube, Island Records, Interscope, UMe, and UMC announced the relaunch of U2’s Official YouTube Channel with weekly releases of the band’s most iconic music videos and never before seen content on YouTube, all remastered at the highest possible standard. The coming year will see the band’s music video catalogue remastered in HD and launched exclusively on YouTube.

Throughout their career, U2 has been known for their unparalleled creative vision and artistry when bringing their music to life on screen. As new and remastered content is added over the next year, their YouTube channel will evolve as a hub to celebrate the band’s 40-year legacy and the evolution of their approach to video. Highlights will include previously unreleased live, behind the scenes, and remixed content, and some of their best-known music videos upgraded to HD for the first time ever, up to 4K quality whenever possible. The project will result in hundreds of new and upgraded videos being added to the channel, and a curated experience for fans to be able to explore the depth of the catalogue. 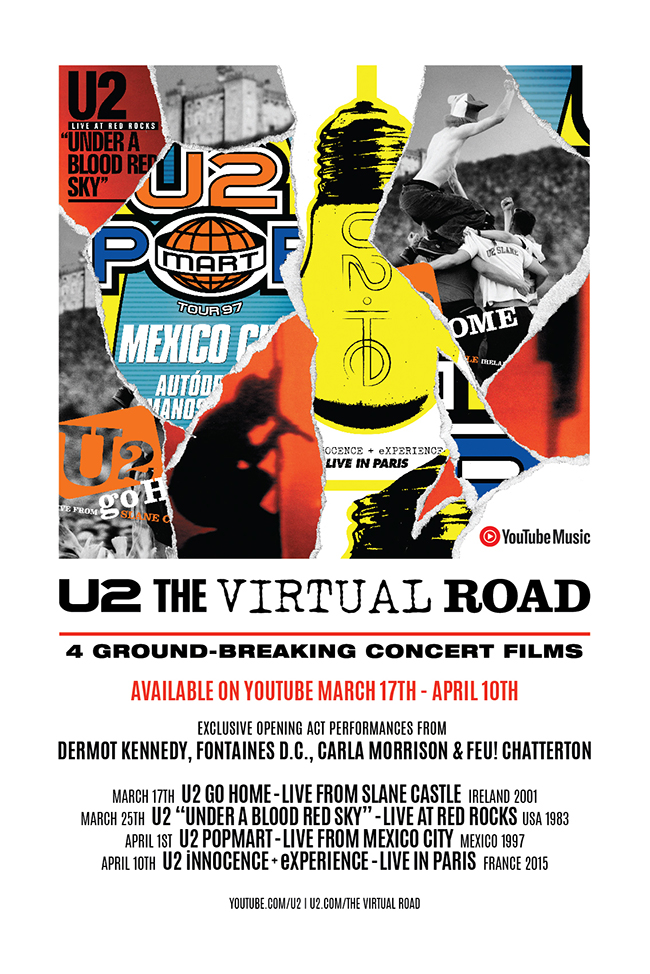 U2 announce ALL THAT YOU CANT LEAVE BEHIND - 20th anniversary reissue

Island Records and UMC today announce the 20th Anniversary reissue of U2’s global smash hit album All That You Can’t Leave Behind. This multi-format anniversary edition release, featuring a brand new 12-track remaster of the...

ALBUM REVIEW: U2 - Songs of Experience

The word iconic when assigned to a rock band carries a certain weight and when the band is soon to clock 40 years in their existence that weight can become a burden. U2 long ago...

U2 Announce More Shows After Tickets Sell Out in Hours

Following last week’s announcement, that U2 will return to select stadiums this year with U2: The Joshua Tree Tour 2017, Live Nation has just confirmed that the tickets for all 8 UK and European performances...