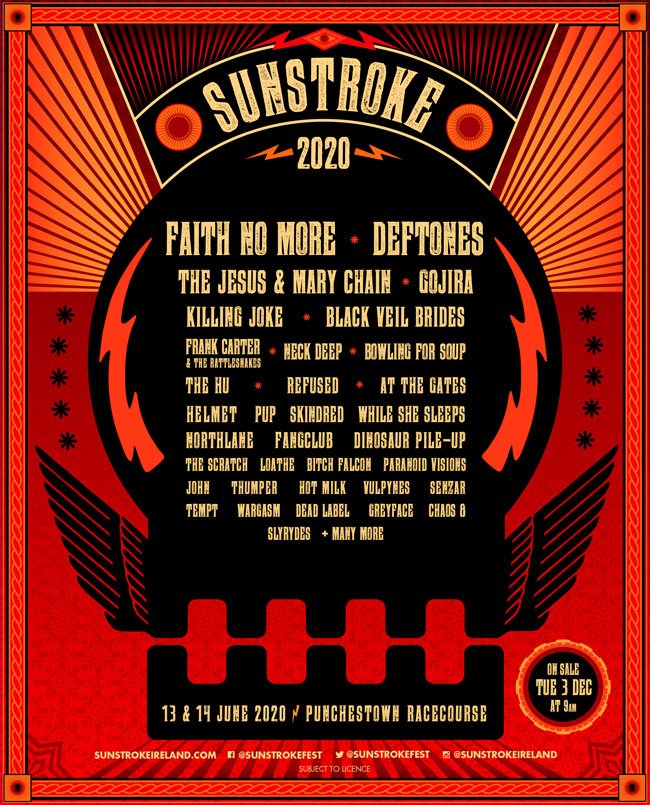 Faith No More formed in 1979. After releasing six studio albums, including best-selling records The Real Thing (1989) and Angel Dust (1992), Faith No More officially announced its breakup in 1998. The band has since reunited, and released its seventh studio album, Sol Invictus, in 2015.

Since Deftones’ inception, the multiplatinum, Grammy-Winning alternative rock band from Sacramento, CA have quietly been pursuing two paths, delivering songs defined by churning double-fisted aggression while also testing the boundaries of music by incorporating elements of psychedelia and shoegaze. Deftones have released seven albums to date and have sold over 10 million albums worldwide.

Gojira has challenged itself and heavy music since forming in 1996. Metallica, Slayer, and Mastodon have all invited the band on tour in addition to show-stopping festival performances at Download Festival, Rock on the Range, Slipknot’s KNOTFEST, and many others. They’ve earned fans in everybody from James Hetfield and Slash to Deftones and Lamb of God.

The Jesus and Mary Chain emerged from Scotland to become one of the most influential bands of their era. What followed was a rush of creativity and controversy in which the power of their music – most strikingly the landmark debut ‘Psychocandy’ – was matched by the volatility of their relationship. Their journey sparked a wider influence. Not only did their success help Alan McGee’s Creation Records to flourish into the home of Britain’s most critically acclaimed bands from My Bloody Valentine to Oasis to Super Furry Animals, but early drummer Bobby Gillespie made history of his own with Primal Scream.