EMF frontman James Atkin has topped the charts on both sides of the Atlantic, enjoyed platinum-selling album success, received an Ivor Novello nomination for his songwriting and toured the world many times over. He has just released his brilliant new solo album, ‘Popcorn Storm’, in Easter 2019. Mark Millar caught up with James to talk about the new album, EMF and his musical ideas. 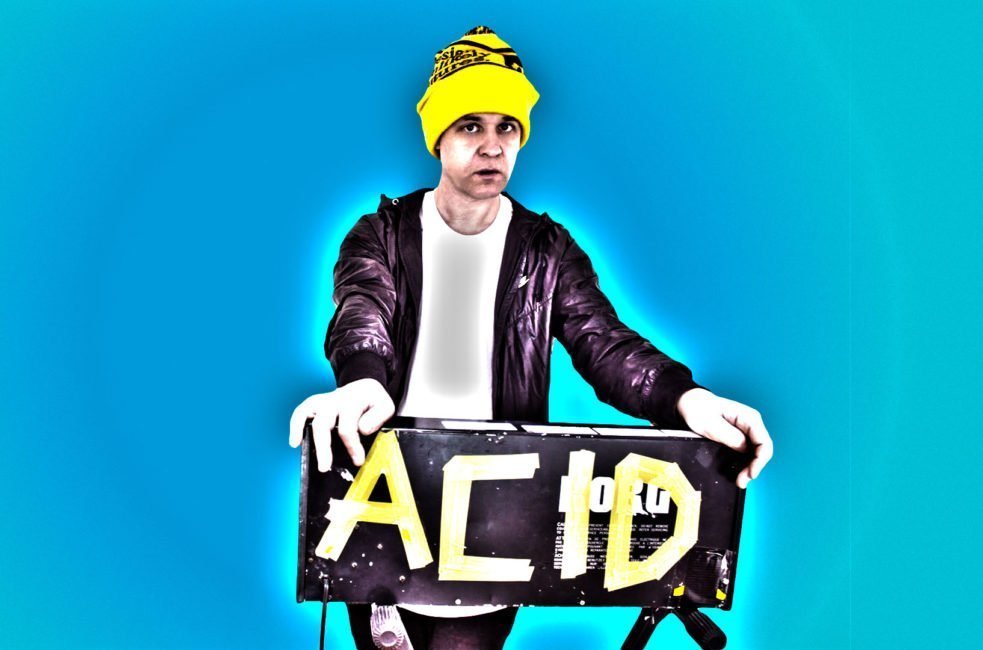 Your latest album ‘Popcorn Storm’ is out now. Did you go into the recording with any preconceived ideas of how it should sound, and what you wanted to write about?

JA: Yes, but not so much about the lyrical content – it was more about the sound. I think the problem with liking lots of different types of music, is you get a bit conflicted about when it comes to making your own music, and what you are actually going to make. When I started making the album, it was quite live with guitars and live-sounding drums. Then I was listening to a lot of electronic music, and I decided I wanted to make an electronic album. So I scrapped loads of songs that were quite ‘rocky’ and reshaped some songs with an electronic pop sound. It took me a while to get the angle on the album, but then when I did, it came together very quickly.

Who was involved in recording the new record?

JA: It was just me in my home studio in the Yorkshire Dales with not much influence or interference from people. My wife used to come in to do backing vocals, but she didn’t do too much on this album. So yeah, it’s been a solitary affair stuck in the studio on my own.

When you are recording on your own, who do you play the songs to, to get an opinion that you are on the right track?

JA: Not many people – I don’t have anyone around me. (Laughs) I occasionally pass tunes by Ian Dench from EMF – he has a great ear, and he’s quite big-time now because he writes for people like Beyonce and Shakira, so I think he knows his shit. He usually comes back with a positive response, and if he doesn’t come back at all, then I’ll know that he doesn’t dig the song. And then I’ve got a few old friends who aren’t attached to the music industry, but who have always been very supportive – I always let them have a copy a few months before to have a listen to.

I see Ian Dench was involved with track 8: ‘Stay Classy.’

JA: Ian and I get together quite often, and we write songs. It’s always with a view of it being a new EMF album, but this has been going on for about ten years now. (Laughs) We have got a load of songs that are just sitting on the computer. I like ‘Stay Classy’ – that was one that Ian was involved in writing, then I took it and developed it a little bit. Ian spurred me on to write this third album, but it’s always very difficult because we are a long distance away from each other – we get very excited about the music, but nothing comes to fruition. But it gave me the encouragement to go away and do some writing on my own. Every time I write with Ian I learn a lot from him, and I kind of take that away with me.

Is there a particular song on the new album that made you think, “this is why I’m doing this”?

JA: I think the second track ‘Rise’ was probably the one. I usually have one song on an album that shapes all the rest of the tracks. I like it to sound like one entire thing – probably at the expense of all the songs sounding the same. (Laughs) If I come up with some drums and some bass that works sonically on one song, then I’ll make sure I use it on loads of other songs as well, and try and recapture that, then tweak it a little bit. The tempo of ‘Rise’ is quite slow – it’s electronic and quite sparse and synth-driven, and that’s why it was the one where I thought, “right okay, let’s use that as the model.”

What is the title ‘Popcorn Storm’ all about?

JA: Its nothing too deep – I was hunting around for a name and the guy I used to play the drums with, his daughter just came out with the name. He told me this, and I said, “wow that’s really good, can I use it?” We checked with her, and she said it was okay, so we gave her credit on the album. (Laughs) I think she’s only about five years old, so I’m hoping it doesn’t turn up on some CBeebies programme.

The album artwork is pretty cool as well – so what inspired that idea?

JA: Again it was just by chance. I’ve got a really cool art guy who lives over in Hebden Bridge in Yorkshire. He’s done the previous two albums, and he’s so good. Sometimes I just want to concentrate on the music and getting that together, so I tell him I need a new album cover, and I let him have free reign, and he comes up with a concept and idea. I don’t want to put any input into it because he’s so good at it. He came back with the bunny images, and I thought they were great.

Will you be playing any shows in support of the album?

JA: We are doing K-Fest, which is a festival with The Lightning Seeds and Space. At the minute that is the only one. I will probably get down to Shiiine this year, but other than that I’m just going do a couple of festivals. With the first album, I went out and toured it quite a bit, and it was hard work at the level I’m at. It was a little bit disheartening, but at least when you do festivals, you are guaranteed a crowd.

The EMF debut album ‘Schubert Dip’ was 28 years old this month. Does it seem that long ago, and what are your memories of recording that album?

JA: It seems like a lifetime ago 28 years is such a long time. There are only little bits I remember its a distant memory. The bits I remember are writing the songs and playing the first few gigs – that was the most exciting and the best bit, and then it all became a whirlwind of stuff happening quick. I didn’t really take it all in – I was too busy being a pop star to know what was going on. I’ve got fond memories of it, but I have a bit of love and hate thing with EMF, to be honest with you. Sometimes I love and have fond memories and then sometimes I feel like “Oh my god I can’t go near that” Most of EMF was up, but some bits were down. It’s a strange one, just a distant memory like a distant relative who is gone now.

It’s overdue a reissue – will this happen?

JA: Its actually going to happen and we have recently finalized the artwork. The is a box set coming out with the three EMF albums with some extra content. We have remastered all the records, and it sonically sounds better. So that’s all in the pipeline and should be out by the end of the year.

I read EMF is recording new music. Will it be a new album?

JA: I don’t know yet – there was talk of including some new music with the anniversary box sets, but I’m not sure if that’s going to happen now, which means that we will probably release it next year, although I’m not sure who through or with what. Me and Ian wrote hundreds of songs, but we have got about three that we have been working very hard on and we have had producers working on them, and they sound really good. But we are still unsure where and when it’s going to come out.

If you could change anything about the industry, what would it be?

JA: It all just seems very unreal with all the pop stars and X-Factor – when we were indie kids growing up, that was all anti-music. Anything manufactured was just wasn’t real – although I do like some pop music. It seems now that the whole industry is saturated with manufactured pop. Being a teacher, I see kids up and coming, and they have a talent, and I say to them, “What are you going to do with that talent?” And they say, “I don’t know – maybe I’ll go on X-Factor or enter a competition.” But that’s how they do it these days – we had to sit in a dirty garage rehearsing every weekend for weeks on end.

If one of your students came up to you and told you they were starting a band, what advice would you give them?

JA: First of all, I would say, rehearse, rehearse, rehearse, and write lots of songs then write some more. Learn your craft, and try and do as many gigs as you can, because it’s when you start playing live that you start coming into your own. And stay positive. I might tell them not to bother, but I wouldn’t crush their dreams. (Laughs) I would tell them to do it for passion and love because if you do it for financial gain, I think the bubble has burst on musicians making a living as such. Unless you are on top of your game you can’t make a good living. All my musician friends I know are in bands at the moment, like my peers who are in groups similar to EMF are still gigging, but they have day jobs, which is a strange one isn’t it?

Of all the records in your collection, who do you have the most albums by?

JA: My most recent purchase was the new Chemical Brothers album – we have been loving that, and have had a few nights playing that really loud. 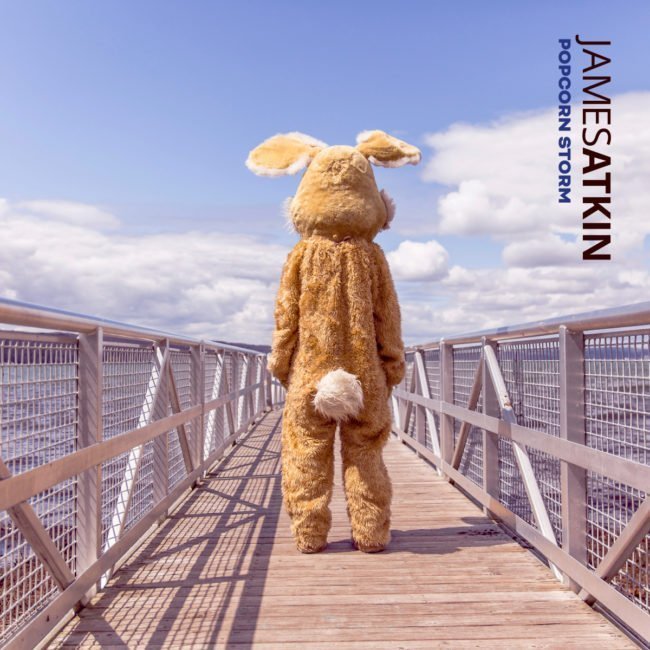 Get ‘Popcorn Storm’ from https://jamesatkinmusic.com/

EMF frontman James Atkin has topped the charts on both sides of the Atlantic, enjoyed platinum-selling album success, received an Ivor Novello nomination for his songwriting and toured the world many times over. He is […]

James Atkin makes his solo live debut next month in support of his album ‘A Country Mile’, out on March 2nd. Full details of “A Country Mile” are below for you. The ex-EMF singer will […]

James Atkin breaks down the inspiration behind new music video single D.R.A.M.A, from his latest solo album Popcorn Storm. Here’s what James has to say about the creation of the track. “The inspiration for the […]