Funk legend Nile Rodgers will return to Belfast with his legendary band CHIC for a second night on Wednesday 05th June 2019 at Waterfront Hall following the SOLD OUT show on Tuesday, June 04th. Among music legends, Nile Rodgers is truly exceptional.

He amplifies his legacy as a multiple GRAMMY-winning composer, producer, arranger and guitarist by constantly traversing new musical terrain and successfully expanding the boundaries of popular music. As the co-founder of CHIC, Rodgers pioneered a musical language that generated chart-topping hits like “Le Freak,” sparked the advent of hip-hop with “Good Times,” and won CHIC 11 Rock and Roll Hall of Fame nominations.

Nile Rodgers transcends all styles of music across every generation with a body of work that’s garnered him inductions into the Rock & Roll Hall of Fame (2017) and the Songwriters Hall of Fame (2016). His work in the CHIC Organization and his productions for artists like David Bowie, Diana Ross and Madonna have sold over 300 million albums and 50 million singles worldwide while his innovative, trendsetting collaborations with Daft Punk, Avicii, Sigala, Disclosure and Sam Smith reflect the vanguard of contemporary music.

In addition to Nile's claim to fame as a true "hitmaker", he is also the Founder & Chairman of the We Are Family Foundation, a non-profit organization dedicated to the vision of a global family by creating and supporting programs that promote cultural diversity while nurturing and mentoring the vision, talents, and ideas of young people who are positively changing the world. Fueling four decades of pop anthems with more than 200 production credits to his name, the scope of Nile Rodgers' peerless influence is undeniable. 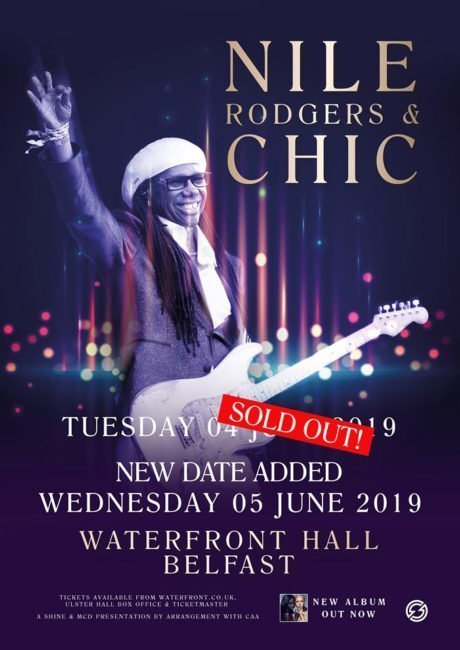 NEW RULES have announced a headline show at the Oh Yeah Centre, Belfast on 16 February

Following their sold-out 2019 headline tour, a major tour for 2020 including a Show at the Oh Yeah Centre in Belfast on 16 February. Tickets go on sale Friday 20th September from all usual outlets....

Irish singer-songwriter Amy Montgomery is pleased to announce a headline Belfast show at Ulster Sports Club on Saturday 9th May 2020. The first thing that grabs your attention about Amy Montgomery (apart from her Bohemian...