Today, Conor O'Brien is pleased to announce Villagers' fifth studio album Fever Dreams which will be released on August 20th via Domino. Escapism is a very necessary pursuit right now, and Fever Dreams follows it to mesmerising effect. It works like all the best records - it becomes a mode of transport; it picks you up from where you are and sets you down elsewhere.

Coinciding with the announcement, O’Brien has also shared the first song from the forthcoming album, “The First Day”. It was inspired by a trip to the fabled Another Love Story festival in County Meath – beginning as a snatched electronic doodle, it morphed into a widescreen, lushly cinematic evocation of the joy in human connection.

Watch the video for “The First Day” - BELOW:

Director Daniel Brereton says of the video “The whole process was pretty collaborative with Conor. I think we both imagined a floatiness to the video, and obviously, the title conjures up a lot of imagery and ideas, ‘The first day of the rest of your life’. What does that look like? How does that feel? We were very lucky to shoot on film and have great casting and styling. Shooting during a pandemic is not easy, so I feel fortunate that we got to make it happen.”

O’Brien says on the gestation of Fever Dreams: “I had an urge to write something that was as generous to the listener as it was to myself. Sometimes the most delirious states can produce the most ecstatic, euphoric and escapist dreams.”

These are songs with the strange, melted shapes and the magical ambivalence of dreams. The intent of the songs is both mysterious and as clear as a bell. With Fever Dreams, there is a sense of a deepening mastery and an expanding reach by O’Brien. Inspiration for the album was found in many places and came in from all angles, from night swimming on a Dutch island to Flann O’Brien, Audre Lorde, David Lynch, L. S. Lowry via the library music of Piero Umiliani and Alessandro Alessandroni and jazz from Duke Ellington and Alice Coltrane.

Written over the course of two years, the main bodies of the songs were recorded in a series of full-band studio sessions in late 2019 and early 2020. During the long, slow pandemic days, O’Brien refined them in his tiny home studio in Dublin, and the album was then mixed by David Wrench (Frank Ocean, The xx, FKA Twigs).

Alongside the album announcement, Villagers have confirmed a string of live dates for later this year taking in the UK and Ireland.

Fever Dreams follows The Art Of Pretending To Swim, Darling Arithmetic, {Awayland} and Becoming A Jackal. Conor O’Brien also has a string of accolades under his belt including two Ivor Novello Awards, two Mercury Music Prize nominations and is a previous winner of Ireland’s Choice Music Prize. Additionally, Villagers’ music has featured in the BBC/Hulu series Normal People and their Spotify session of “Nothing Arrived” has hit over 165 million streams.

Tracklisting:
1. Something Bigger
2. The First Day
3. Song In Seven
4. So Simpatico
5. Momentarily
6. Circles In The Firing Line
7. Restless Endeavour
8. Full Faith In Providence
9. Fever Dreams
10. Deep In My Heart 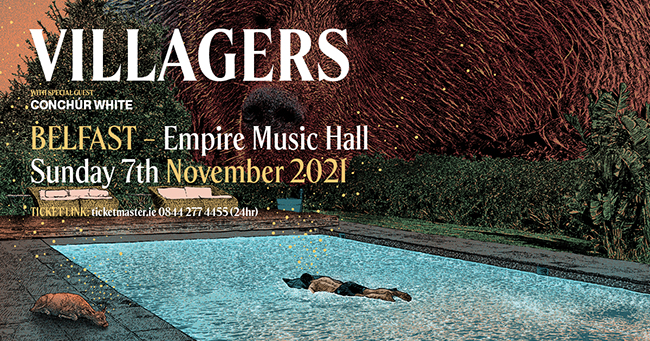 Tickets on sale here from 9 am Fri 23rd April.

There has never been anything quite like The Red Hot Chilli Pipers, from their formation in 2002 and a cameo appearance at T in the Park in 2004 with the Darkness to opening the main...

VILLAGERS - Release 'Where Have You Been All My Life?' on 8th January 2016

Where Have You Been All My Life?, released on 8th January 2016, is a collection of songs that distils five years and three albums of Villagers’ songwriting into one flowing narrative. Recorded in one day...