Today, James Lavelle's UNKLE reveal the pre-order details for the highly anticipated Rōnin I Mixtape and the new single ‘If We Don’t Make It’. Watch the stunning visual preview of Rōnin I BELOW.

UNKLE's Rōnin I mixtape features the brand new singles 'If We Don't Make It' and 'Do Yourself Some Good', as well as seven brand new UNKLE remixes. The album will be released in a variety of formats including a deluxe limited edition splatter vinyl in a tip-on sleeve, as well as clear and transparent orange vinyl editions.

A deluxe 2CD edition in a tip-on sleeve, as well as a standard cd edition, and two cassette editions. 20 hand signed and numbered test pressings of the album are also available. Every order includes an exclusive signed postcard.

Track Listing is as follows

3 The Other Side (Rōnin Def Mix) [Feat. Tom Smith]

5 If We Don’t Make It (Rōnin Throwdown)

6 Do Yourself Some Good (Rōnin Throwdown)

The album also features long term UNKLE collaborators Philip Sheppard, Wil Malone, Jack Leonard and Alex Thomas. The incredible artwork was created by Warren Du Preez & Nick Thornton Jones using imagery from their beautiful short film “Lost Highway” which was created as an accompaniment to The Road part II and was featured in UNKLE’s extraordinary immersive art experience at Saatchi in 2019. They also worked alongside Toshiya Horiuchi from 7Stars Design Tokyo, who designed the logos for Rōnin. Toshiya worked with labels like A Bathing Ape in the early years and is a well respected designer from the Harajuku creative scene from the early 90s where he first met James while he was working with NIGO.

On Wednesday, March 31st at 9 pm GMT UNKLE will join Tim Burgess for a Tim’s Twitter Listening Party, to discuss the album.

'If We Don't Make It' follows last month's 'Do Yourself Some Good', which went straight onto BBC Radio 6 Music's A-list, and quickly became a fan favourite. Like its predecessor, 'If We Don't Make It’ is inspired by James's early DJ roots, and is infused with his love of breaks, samples, Super Disco Breaks and edits. The track was produced with long-time UNKLE collaborator Steven Weston.

When the lockdown started in Spring 2020, it was assumed that Summer shows would just be postponed by a few months. UNKLE had a busy schedule of touring planned, which was going to be based around a more dance-orientated show that had premiered at Fabric for their 20th-anniversary celebrations. What was initially a return to the studio to remix tracks from 'The Road' albums for the scheduled tour, soon evolved into a pair of full-length releases, featuring new tracks alongside the reimagined ones. The two forthcoming 'Rōnin’ mixtapes are rooted in the club culture that James Lavelle comes from.

“ ‘Rōnin’ was an idea that started in lockdown back in June 2020 where Steven (Weston) and I started doing some remixes for a new set we thought we would be playing later in the year. As the lockdown continued and any hope of live shows disappeared, we decided to work on it as a mixtape where we could create an hours worth of new remixes and incorporate brand new tracks in the spirit of a new live show, but give it a proper release due to the circumstances.”, James says.

“I wanted to take a look at my work across ‘The Road’ period and create club versions of particular tracks, reflecting the mood of where we are, but to also take it into an optimistic uplifting place. To create a mix that felt like both letting go and coming together - the best things that club music can do to take you on a journey through all the eclectic elements of a set I love to play. I looked at certain songs where I felt the lyrics were in feeling with the current world we are living in. Most of the songs were recorded before Covid-19 hit, there was a lot of struggle, uncertainty and political change and unrest at that time. The pandemic has just amplified that, so I felt the songs still resonated with today’s situation giving them a new lease of life.” 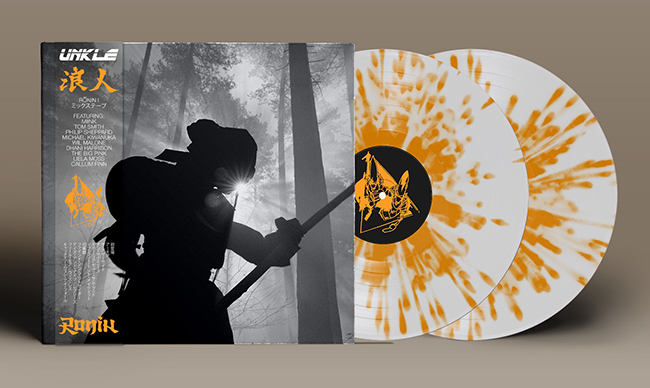 Compiling the series of mixes, James was inspired by his 'That’s How It Is' night, (which he ran with Gilles Peterson at London’s Bar Rumba,) digging in the crates and returning to the tracks played there (as well as at the ‘Dusted’ sessions at the Blue Note). “I also used the opportunity to work on some new music. Each record contains two brand new recordings where I got to break some habits and experiment with ideas that I had been thinking of for a while.”

The tracks from these studio sessions take the energy from that period in club culture, as well as James' consistent relationship with contemporary dance music, from his residency at Fabric through to his seminal Global Underground and UNKLE: Sounds mixes. They are rooted in the classic Mo’ Wax spirit and given a contemporary twist through the use of modern production techniques. ”The record is meant to be like a night out at a party or club from the beginning of the night to the end, or a new UNKLE:Sounds show.” explains Lavelle, “It’s the set I dream of playing out in a festival or club when we finally get to come together and dance again!”

‘Rōnin I’ was produced in collaboration with Steven Weston, the long time musical director of the UNKLE: Live show, and a former Grammy nominee. Part II will see Lavelle working with West London multi-instrumentalist Miink, who has featured on a number of UNKLE tracks over the past five years, amongst others. But that’s another story...

UNKLE release 'Do Yourself Some Good' and announce Rōnin Mixtape

Today, James Lavelle's UNKLE return with the uplifting new track, ‘Do Yourself Some Good’. The single, which premiered last night on Mary Anne Hobbs show on BBC 6Music, is taken from the forthcoming mixtape, ‘Rōnin...

UNKLE have announced their new album THE ROAD: PART II / LOST HIGHWAY which is set for release through frontman James Lavelle’s label  Songs For The Def on March 29, 2019. The album, which is split into two acts, is the follow-up...

Platinum-selling British band Editors today release the UNKLE Remix for their latest single 'Cold'. James Lavelle's outfit has reworked the track, taking it to a whole other level. 'Cold' is the 4th single taken from...