U2 have officially revealed the album cover for the physical version of 'Songs Of Innocence' on U2.com. The visuals reflect the new songs and their inspiration in the early years of U2 as teenagers in Dublin. Glen Luchford's striking cover image of Larry Mullen Jr, protecting his 18year old son, resonates with the band's iconic 1979 debut album Boy - and the album War, four years later. Both featured the face of a child, Peter Rowen, the younger brother of Guggi, Bono's childhood friend growing up on Cedarwood Road.

'We've always been about community in U2, about family and friends,' explains Bono. 'Songs Of Innocence is the most intimate album we've ever made. With this record, we were looking for the raw, naked and personal, to strip everything back.'

The idea of the unique relationship between a parent and child, the image of a father and son, came from the band. The shoot with Larry and his son was initially an experiment but everyone loved it as a visual metaphor for the record.

If you know the album, reflects Bono, you'll see the themes in the visual language, how 'holding on to your own innocence is a lot harder than holding on to someone else's.' 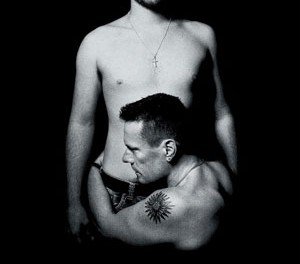 The image has been dividing fans since it's been doing the rounds for the past week on various U2 fan sites after initially appearing on the Barnes And Noble website. It has been described by various fans as: "It's extremely creepy. I don't get it", "Very homoerotica, Not a fan. I feel dirty for even looking at it"

Seems like U2 have created another talking point, although in the early '90s Bono did say that "We shall continue to abuse our position and fuck up the mainstream." Bono is certainly a man of his word.

Deluxe, 2 CD Format which comes with 2 x 16-page booklets, the 11 track album on CD1 plus additional tracks on CD2 including a 6-song acoustic session along with Lucifer's Hands, The Crystal Ballroom, The Troubles (Alternative Version) and Sleep Like A Baby Tonight (Alternative Perspective Mix by Tchad Blake).

Single CD Format with a 24-page booklet along with the 11 track album.

U2 Announce THE EUROPA EP Exclusively for RECORD STORE DAY 2019

Interscope announces today: U2 The Europa EP, a new 3-track EP to celebrate Record Store Day on Saturday 13th April 2019. The Europa EP: Side A features an exclusive new mix of previously unreleased material from U2’s...

Live Nation and MCD today confirm shows in Dublin and Belfast on U2’s upcoming eXPERIENCE + iNNOCENCE Tour with tickets on sale from 2nd February. As part of their European tour, the band will play...

Tributes have poured in for the blues legend BB King, the inspiration for generations of musicians, who has died in his sleep aged 89. The world famous singer and guitarist, who began life on a...