SoCal icons and one of the best-selling punk rock bands of all time, THE OFFSPRING, have unveiled the accompanying music video for their recently released single “Let The Bad Times Roll,” the title track from their highly anticipated tenth studio album coming 16th April 2021 via Concord Records.

The multi-format smash hit has vaulted to the top of Rock and Alternative radio charting at #11 and #25, respectively, just four short weeks after its release and continues to climb with no signs of slowing down. “Let The Bad Times Roll” was #1 most-added at Rock radio for two weeks in a row upon release and has racked up nearly 4 million global streams to date.

Fans and critics alike applauded the band’s new music with Rolling Stone hailing it a “return to their signature mix of guileless pop-punk and forked-tongue irony,” Loudwire describing it as “a hand-clapper that shifts from raucous acoustic-driven passages to the band's familiar punk sensibilities all while pointing the finger at the ills of the world today,” and Alternative Press proclaiming, “the countdown for The Offspring’s next album has officially begun.”

True to the irreverence at the core of punk rock music, the music video delivers a contemporary narrative tied to the song’s topical lyrics that reflect the ongoing challenges being faced across the country today.

Watch the video BELOW:

The band have also announced a second stripped back set at Banquet Records on the 3rd of December at 6 pm. The first three shows at Crash Records, Leeds and Banquet Records sold out instantly.

Legends and innovators of the Southern California punk rock scene, The Offspring have sold more than 40 million albums worldwide, won countless awards, and have toured consistently, playing more than 500 shows in the last decade alone. Their music has had a lasting impact across film, television, and video games, but the band turned their focus to a new album release in 2021. The band is comprised of singer Dexter Holland, guitarist Noodles, drummer Pete Parada, and bass player Todd Morse. 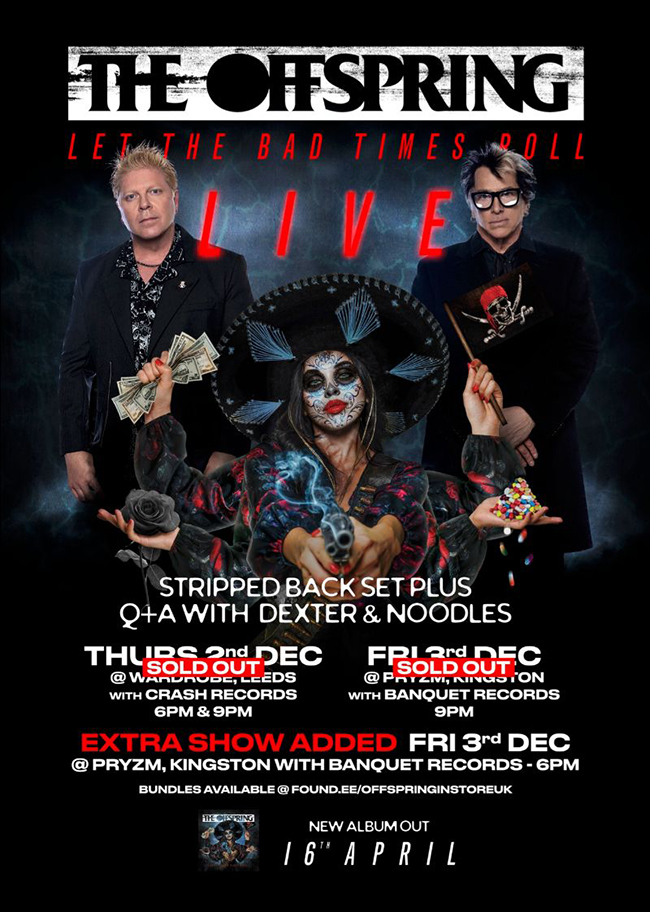 One of the best-selling punk rock bands of all time, THE OFFSPRING have set a release date for their first new album in almost a decade. The band’s tenth studio album Let The Bad Times...