Reef have announced the 25th-anniversary vinyl reissue of their beloved 1995 debut album, Replenish, out on September 25th via Hassle Hindsight. The vinyl will be available in a transparent orange colour pressing, which is limited to 500 copies, each hand-numbered, and will be exclusive to the band’s official store & indie retailers. The album will also be reissued in transparent blue vinyl which will be the general retail version.

Birthing hits including ‘Naked’ and ‘Good Feeling’, Replenish was the album that propelled Reef from the wilds of rural Somerset directly into the limelight. Arriving at a bountiful time for British music, the album provided a welcome counterpoint to the showy displays of Britpop and cemented their status as a band who wrote from the heart, imbued with the influence of Led Zeppelin, Free, and the greats of soul.

“We weren’t some wishy-washy band come to fuck about,” explains vocalist Gary Stringer. “We weren’t scared of anything or anyone. We just put it all out there.”

After forming at a music college in west London, the band’s rise from jamming in a bedroom of their shared house in Isleworth to prominence was astronomical. Building on the songs that Gary and bassist Jack Bessant had brought up with them from Somerset, music flowed out of them.

The tracks that would appear on Replenish were written in that bedroom, including the album’s eventual opener ‘Feed Me’, a song that painted an outsider’s portrait of the heartless, grey-skied capital.

Another pivotal song would be future Top 20 single, ‘Naked’. “We wrote Naked really early on,” says Gary. “Kenwyn had this genius riff, and we put melodies and vocals over the top if of it. It took 20 minutes, tops. Twenty minutes for three-and-a-half minutes of gold.”

Less than six months after moving to London, the band had a record deal with the newly launched Sony S2 imprint. The band swiftly developed a reputation as a stellar live act, and in early 1995 Sony chose ‘Naked’ as the soundtrack to the advert for their new MiniDisc recorder. Shortly after, ‘Good Feeling’ was released as a single, followed by ‘Naked’ in June that year, hitting 11 in the charts.

When Replenish was released in June 1995, it reached number 9 in the album chart and set the stage for the rest of that year to be an exciting blur. A month after the album was released, Reef supported the Rolling Stones at a tiny gig at London’s Brixton Academy. They played with everyone from grunge heavyweights Soundgarden to stoner rock pioneers Kyuss and made a homecoming appearance opening the NME stage at Glastonbury.

A quarter of a century later, with number one albums countless tours, and a string of massive hits under their belts, Reef are still out there, doing what they’ve always done, passion undimmed. And Replenish is where it all started. “That record changed our lives,” says Gary. “It’s kids from the countryside coming to the city and saying, ‘This is us, this is our energy, this is what we want to share.’ And people connected with it.”

Replenish sounds as assured and exhilarating as it did when it was originally released. But this is more than just a stellar debut album – listening back to it now, it’s the sound of being young and hungry and having the whole world in front of you. 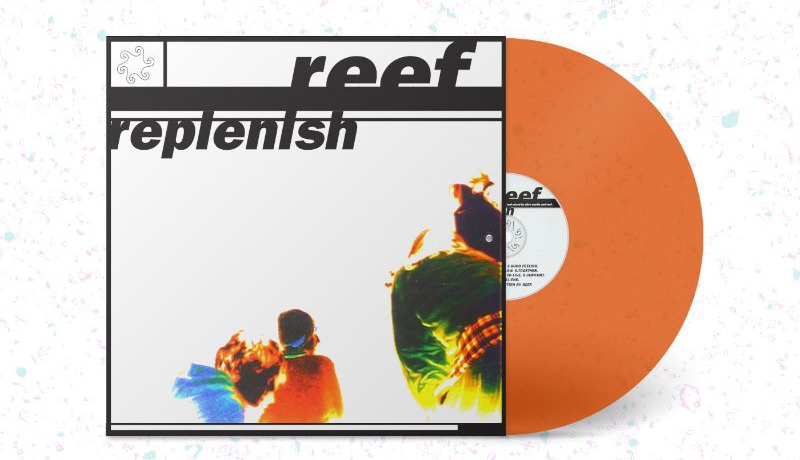 REPLENISH TRACKLISTING
Side A :
1 Feed Me
2 Naked
3 Good Feeling
4 Repulsive
5 Mellow
6 Together

Reef’s first studio album since 2000’s ‘Getaway’, the bracingly thrilling ‘Revelation’ is what its title promises: an ear-tingling, heart-stirring, head-spinning comeback record that is less the sound of a group reborn than one born for […]

Reef have unveiled the video for their Radio 2 playlisted new single ‘My Sweet Love”, which features a guest vocal from Sheryl Crow. ‘My Sweet Love’ is taken from ‘Revelation’, Reef’s first new studio album […]