The Northern Irish live events industry is calling on the UK Government to support its workers and halt the imminent collapse of the industry. The UK live events industry is world-renowned for its hard-working ethic and the ability to deliver creative and highly technical shows. The unique skill set and talent that lies within this sector is a huge asset to the local economy. In Northern Ireland, 7,500 jobs are at risk.

The #WeMakeEventsNI team – which is made up of sound engineers, lighting designers, tour caterers, truck drivers, tour managers, riggers, backline techs, video directors and festival promoters to name but a few disciplines – is raising awareness about the inevitable demise of the touring, festival and theatrical events industries. These workers are also fundamental to corporate business events, live comedy shows, award ceremonies and prominent cultural celebrations.

Pre-pandemic in Northern Ireland alone, music tourists would spend around £90m per year, with concert and festival audience numbers reaching almost 300,000 per annum. There is no question that the sector is vital to the local economy. 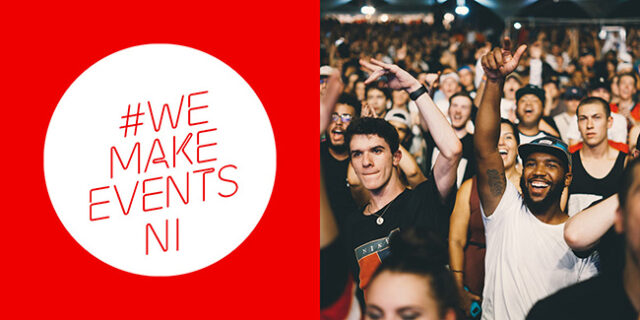 #WeMakeEventsNI has been sharing stories from artists and workers, who haven’t been allowed to work since March and have no set date for events to return, in order to show the devastating impact the current situation is having. The campaign has been backed by local artists, including comedian Colin Geddis and Snow Patrol’s Gary Lightbody.

The crisis is real; 58% of live music businesses staff have been furloughed, with 87% of that figure needing an essential extension. It is understood that 45% of affected companies are expecting to make further redundancies after the end of the Government furlough period unless it is extended. Meanwhile, some of the freelance staff that make up a huge portion of this workforce have received zero Governmental aid.

As strict social distancing remains in place and limited numbers are able to meet for recreational activities, mass gatherings for financially viable concerts and festivals are on hold.

With no sign of a work start date, supply companies are inactive and production staff are being laid off. Much of the industry here will not survive into 2021. Self-employed workers are reluctantly seeking work in other sectors despite having niche, once sought-after skills.

Paul O’Shaughnessy is a FOH Sound Engineer from Belfast. You’ve been hearing his work for 20 years, but the sounds he's making now are the most important of his career. ‪#WeMakeEvents‬ ‪#WeMakeEventsNI‬

A post shared by WeMakeEvents Northern Ireland (@wemakeeventsni) on Sep 12, 2020 at 6:48am PDT

PSI’s Sean Pagel, who is a director at the technical rental company and also Liam Gallagher’s tour rigger, comments: “We are fighting hard for an industry that, in normal circumstances, brings so many people so much joy. We’re asking people to support the campaign and help us to secure government assistance for the events industry workforce. Without it, the companies and people who make every kind of event you can imagine will be gone.”

Carrickfergus born Steve Strange is one of the most respected music agents in the industry. His credits read like a top tier festival bill: Eminem, Coldplay, Snow Patrol and Kodaline amongst many others. He says: “The live industry is currently on its knees and without Government support, the sector will see mass losses and a drain of talent – both artists who are unable to perform live and skilled workers who will move to other sectors in order to survive.”

Sharon Tea is Logistics Manager of award-nominated bussing and trucking company Crossland – NI’s only supply business of its kind. The company rents production trucks and tour buses to stars such as Hollywood Actor and Tenacious D frontman, Jack Black. “On 17th March, the last of our fleet rolled up. Our 2020 ended there. We should be driving to the far-flung corners of Europe, moving bands and equipment to local venues but after 14 years of building our business, it’s been shattered through no fault of our own. The show can’t go on.”

Snow Patrol frontman and Bangor native, Gary Lightbody, has the final word. “There are so many vital roles in this ecosystem; the tech crews, roadies, transport companies, riggers, promoters and many more that cannot be forgotten. With no start date for their livelihoods, these jobs are all under threat. This is a community that comes together, not only to create live events and soundtracks for the general public to enjoy enormously but in this – a very real-time of need for the industry we all love.”

The #WeMakeEventsNI campaign is building towards a global day of action on Wednesday 30th September, which will see the Northern Ireland events industry join a worldwide call for support.

After selling out The Ulster Hall & 2 Nights at The Limelight, Colin Geddis returns on April 27th 2018. His show, “General Banter…” Combines the venomous social commentary from his successful online videos and podcasts […]

A host of Ireland’s musicians have joined forces as ‘Street Lights’ to create a single and album to generate funds for the most vulnerable, our homeless. Peter McVerry Trust, Simon Community Ireland and Focus Ireland […]

Oh Yeah Music Centre has announced Snow Patrol as recipients of the 2019 Oh Yeah Legend award. In recognition of the band’s extraordinary achievements over the last 25 years, the presentation will be made at […]