Irish electro-indie-house-pop duo Le Boom is pleased to announce a headline Belfast, Duke Of York show on Thursday 10th October 2019. The band comprising of Christy Leech and Aimie Mallon will release their eclectic debut EP, ‘All Of My Highs’ on May 3, 2019 – the first single, ‘Be There For You’ is available now.

Le Boom are one of Ireland’s new music success stories having garnered 2.1 million track streams for their five single releases so far. Christy Leech and Aimie Mallon have quickly become one of the most sought-after new acts thanks to their energetic live show at festivals at home in Ireland and since forming in 2016 have played The Great Escape, Primavera Sound Pro, Electric Picnic and cities such as New York, Reykjavik, and Bilbao.

Last November, they sold out the 1000-capacity District 8 venue in Dublin with much bigger shows to come in 2019 along with the release of their debut four-track EP All Of My Highs to coincide with UK dates in May 2019 and Irish and UK festivals across the summer.

Le Boom’s electro-indie-house-pop music is a rush, it starts dance parties at festivals, venues and wherever they play. Between Leech’s falsetto and Mallon’s manic energy, there’s an infectious buzz in their music.

Christy Leech’s songwriting and production endeavours mark him out as one to watch, for his ability to comfortably mix pop song structures with dance and electronic beats, bolstered and played live with an array of extra percussion, glass bottles and cowbells by the irrepressible livewire Aimie Mallon. What’s attracted thousands to Le Boom’s music so far is the effortless mix of melody and body-shaking music, that never loses sight of an earworm chorus.

The Irish duo met in Dublin after both grew up in Navan, County Meath after experience-building with session bands. Leech’s forays into music saw him live in an artist commune in New York where the occupants would perform a monthly show for their building’s patron in return for free rent. It was in here where Leech began making the music that would resonate with many as Le Boom. Mallon is a trained drummer and musician from BIMM in Dublin.

Le Boom’s debut single release, What We Do, received regular airplay on both US and Irish radio and was featured in a summer campaign for Vodafone as it approaches 1 million track streams. Singles such as Don’t Need It Now, Coma and Animal have brought them multiple prominent features on Spotify’s New Music Friday, Hot New Bands, Running the UK and New Pop Revolution among others. Their biggest sell-out show to date is the 1000-cap District 8 Dublin show in November 2018. Their tracks have soundtracked ads and had placements for Failte Ireland, Made In Chelsea, Vodafone, St. Patrick’s Festival and more. 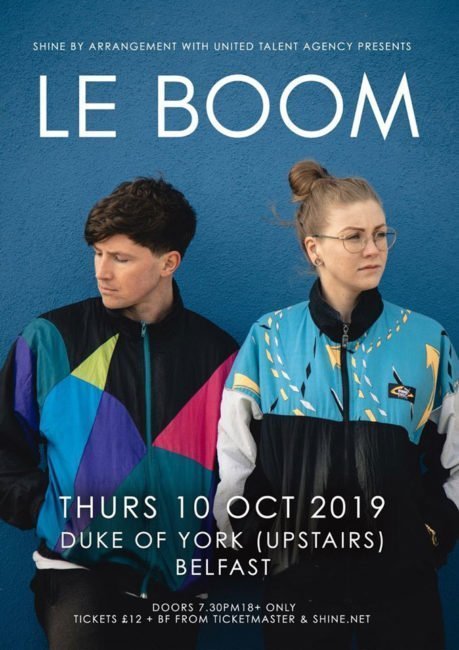