Nashville-based rockers The Nearly Deads released their latest single, “Punk Rock Kitty Cat,” not long ago. Ten years ago, in 2011, The Nearly Deads exploded on the scene with their “Never Look Back” music video, which went viral overnight, collecting millions of views. They followed by winning the Converse Battle of the Bands at the Journey’s Backyard BBQ in Nashville and performing at the Warped Tour.

In 2013, The Nearly Deads signed with StandBy Records. The band has shared the stage with Halestorm and All American Rejects, Tonight Alive, Man Overboard, and In This Moment, among others, and at events such as Summerfest and PrideFest.

XS Noize spoke with guitarist/bassist Steve Tobi and Theresa “TJ” Jeane, who provides lead vocals and keyboards, plying them with questions about motivation, songwriting, and the band’s worst decision. 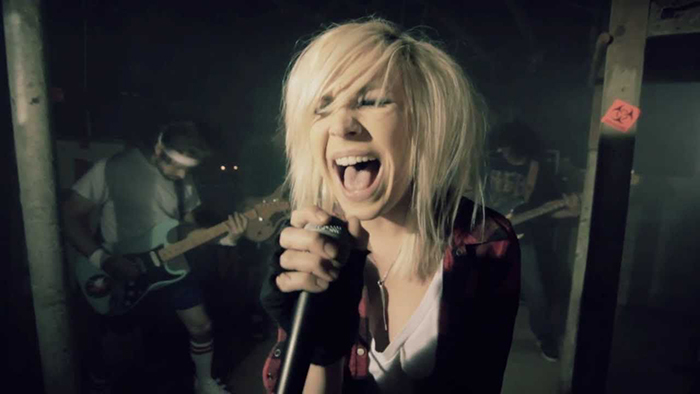 TJ: I have played the piano and written my own music since I was very young. I grew up in a musical household and eventually went on to get a Bachelor of Music in Composition at the University of South Florida. Everyone in the band is a lifelong musician. During college, I started or joined several bands, and the Tampa music scene led me to the people I would eventually end up playing within The Nearly Deads!

How did The Nearly Deads get together?

Steven: This iteration has been a long process because members come and go. But we have had this line-up now for at least 5 years. TJ and I met back in FL in 2009. She joined after we both moved to Nashville in pursuit of better music opportunities. We met Javier through our old drummer Cory. We needed a new rhythm guitarist, and he was playing for a band called Free Will and offered to lend his talents. Josh, we found by posting Craigslist ads for a new drummer. He showed up, was a little shy at first, but nailed the audition, and after revealing he is also a nerd like us, he was, of course, hired.

TJ: “Come On Eileen” by Dexys Midnight Runners! You can't not boogie to that song.

What singers/musicians influenced you the most?

Steven: Well, I am not the band's voice but do find influence from singers as well. Some examples would be Freddy Mercury, Sarah Barthel from Phantogram and Chino from Deftones. Musically, I am inspired by Ian D'sa from Billy Talent, Claudio from Coheed and Cambria and the entire bands of MEW and Smashing Pumpkins.

Which artists are you listening to right now?

TJ: I'm listening to a mix of I Am The Avalanche and Harry Styles. My music tastes are all over the place. When I cook, I only listen to Jazz.

What’s the story behind the name ‘The Nearly Deads?

Steven: As I said, TJ and I are from Florida and wanted to pay homage to the state we grew up somehow. Florida is known as the state of Newly Weds and Nearly Deads. You go there to honeymoon or retire. We thought it was funny and also played into our love of zombie culture.

Steven: It has changed over the years. I used to be very meticulous and tried to turn every idea into a hit. Now it's about quantity and cherry-picking my favourites. Usually starts with a fun guitar riff or chorus idea, and I build from there. If inspiration hits, I might write lyrics or just a chorus, but I usually leave that to TJ's expertise.

What was the inspiration for your new single, “Punk Rock Kitty Cat?”

TJ: The world definitely needed a little fun and goofiness, so we decided it was the perfect time to release this song. It was inspired by our cats and the cat of one of our dear friends with whom we wrote the song. I also love punk rock, so I was very inspired by The Ramones and the Sex Pistols.

What is the single worst decision you ever made as a band?

Steven: THE RV most definitely! TJ will back me up. We decided to purchase a used RV for our first national tour because we didn't think we could ruff it in the van life. What a headache it was. So many mechanical and electronic issues. The expenses outweighed the benefits by a mile. We nicknamed it R Kelly because the sewage pipe had a crack, and so it leaked pee wherever we went, lol.

TJ: Making music is part of my soul; it's just something I have to do. Over the years, The Nearly Deads has had many challenges, ups and downs and changes, but something keeps pulling us all back together. The band feels bigger and more important than all of us. We have our fans to thank for that! They inspire us to keep going and to keep putting our art into the world!

Looking to the future, what’s next for The Nearly Deads?

Steven: We have so many great things on the horizon. We re-launched our Patreon with so many new great ways to connect with the band. We really want to build a fun and positive community where our fans can connect with us on a deeper level but also with each other and build relationships through music, gaming, and pop culture. Our first endeavour is releasing an acoustic album to be named Unearthed. It will be very stripped-down and vastly different reimaginings of nine of our previously released songs with 1 bonus new track. After that, we have plans to record a new full length, and of course, new music videos will be included.