As a young DJ, I have vivid memories of overnights in the back of my mates Nova listening to early Belgium & Piano rave tracks, after which we would listen to Pink Floyd The Wall album, St Etienne & The Orb ‘Pink Fluffy Clouds’. This is a sound that I have loved for years since and respected massively. When I was asked to interview Alex Paterson I jumped a the chance! With a big connection to Northern Ireland ‘Back In The Day’, visits to Giants Causeway, Alex remembers hazy Summer Solstice days at Giants Causeway, heavy Belfast club nights and speaks fondly of his time in our country.

So Alex, What is Abolition Of The Royal Familia about…?

AP: It’s about a journey of enlightenment and realising there’s more to life than the Royal Family. It’s a Familia, It’s not really about the Royal Family, it’s about what the familias are up to.

Track for track starting with ‘Dazed’, was very ‘Bowiesque’

AP: It’s a tune that reminds of me what I listened to in the early 80s, to me it’s like a New York Radio station’ It only lasts 3 mins, very unusual for us to do. The Bowie thing is always gonna be part of what I do, he influenced me in so many parts of my life, I was at the same High School as him in Bromley…that was just the start of it!

‘Narcotics’ reminds me of something proper oldskool classical, almost electronic ‘William Orbitalish’ but with lots of Soul.

AP: William Orbit…Bless Him. Well, we just wanted to have something that accompanied ‘Dazed’ a bit like what ‘Pink Fluffy Clouds’ did with each genre of music we were trying to perceive. We were using the same vocalist. Both of these tracks were ‘done and dusted’ in a couple of days, very good chemistry of working with each other very fast, we didn’t spend a lot of time overdubbing and rejigging things

AP: Yeah for sure, I’m not really a new school bloke, and I don’t pretend to be and I like to do things properly so they sound good.

Tell me about your connection to Stephen Hawkings and Hawk Kings (Oseberg Buddhas Buttonhole).

AP: I got to know his son, who was an old fan of ours back in the nineties, and we ended up going to a lecture and meeting him (Stephen Hawking) then with his family they came to our gig in Cambridge. It was the very hottest day of last year and ever in England..and we enquired about using Stephens vocals for a tune. We were given the go-ahead, they (the family) were happy with what we were using. We didn’t want to offend anyone, a father, a son, we did it the proper way and got permission, even tho it wasn’t his voice.

It again is a bit of an oldskool banger?

AP: It could’ve done maybe with being a couple of minutes longer…it’s perfect for radio…Hello Mr Radio Man!’

I got an older early 90s Justin Robertson vibe on the track ‘Honey Moonies (Brain Washed at Area 49 Mix)’ Can you explain it?

AP: A lot of people I know say it’s their favourite track off the album. It’s the final trilogy of the first two tracks basically, ‘dancefloor orientated’. I was looking at an album that was seventy-nine minutes on an eighty-minute CD and got all that onto two pieces of vinyl, so it all worked out perfectly. It was a labour of time and making sure we could get 20 mins a side on each side of vinyl – ambient tracks on side two and four, and the ‘dancey’ tracks on side one and side three. So if you’re a DJ you have the vinyl you didn’t have to turn it over to play the other dance tune!

AP: Well this kinda is where we go into our ambient world of Orb ambience’ rather than bringing samples in, and time stretching and hiding where they come from. We got a young lady in who plays violin & viola who is German-Swiss & Spanish she’s from the classical world, her names Vienetta.

I asked her did she do vocals, she said sometimes and asked her would she like to speak Swiss/German on one part of the tune and French in the other. So the first part of the track is her talking in French and the second half is her speaking in Swiss/German…just to confuse everyone. In French, she’s talking about Asterix going to the Pyramids, and in Swiss German, she’s talking about how to build a photocopier! I would love to be a fly on the wall of anyone speaking Swiss/German or French listening to it!

‘Afros & Afghans & Angels’ is the next track on the album. What happened there?

AP: Well we just went all cinematic, again another track with Vienetta. We liked her so much we used her on three tracks. With this track, it’s not lost in the album, but it does get lost in the album, because it’s so minimal, but yet it has a theorial beauty to it, it’s like a ”Bladerunner Moment” to it.

Moving on to ‘Shape Shifters (In Two Parts) (Coffee & Ghost Train Mix)’ It really is in two parts I hear it as two completely different parts, was that deliberate?

AP: That’s the idea, that’s our heads up to the Royal Family…oops!

‘Ital Orb, Too Blessed To Be Stressed’ moves us further into the album, what was the concept of this track?

AP: Firstly it was gonna be an Orb Album or a Dub Album, but I didn’t think I’d ever get the time in my life to do a ‘Dub Album’, so I just thought id use the name, it’s an anagram of ‘Orbital’…’The Orb’ is ‘Rob’..which is also my third name. I’m just big on letters and names and numbers. That’s where this album comes about. God knows where the title comes from, it just appeared in my head one month and I was like, good grief it has to happen now!

I love the next track, a little bit of Drum & Bass, sounded very 30 years ago, but very fresh and sharp, moody in bits, with a massive dimension to it, what was the idea?

AP: That was just a happy moment, we were in the middle of finishing off an average tune to go after ‘Afros & Afghans’ and I went to Greggs to get a vegan sausage roll, came back and Michael had changed it into a Drum & Bass track! That’s a sure sign!

AP: And that’s another thing that could’ve happened, but the album hadn’t come out at that point. We’d just done a track called that and we were just having these weekends where there was mass flooding over England everywhere, and it just got worse, and we got worried about our title, but it was nothing compared to our next title. ‘It Rained Forever’ is the ‘Jewel In The Crown’ of the album to me. Its ‘Drop A Pill & Chill’ or is it ‘Get A Chill Pill & Chill’ (Laughs)

The last track of the album; ‘Slave Till U Die No Matter What U Buy (L’anse Aux Meadows Mix)’ is definitely a flip on the album, what was the concept?

AP: The real dark side of The Orb turns up, with the vocals, it’s a little bit poetic, especially with what’s going on at the moment. It’s an acapella about America going under martial law…no people will be able to congregate in any one place at any time…

It’s almost as if you saw our situation coming.

AP: We finished the album at Halloween 2019. A delve into the unknown as always with The Orb, an album that paints vivid audio pictures of today in April 2020 with COVID-19 the bi-product that is a global chain of destruction BUT it was finished in 2019 long before any of this had begun. 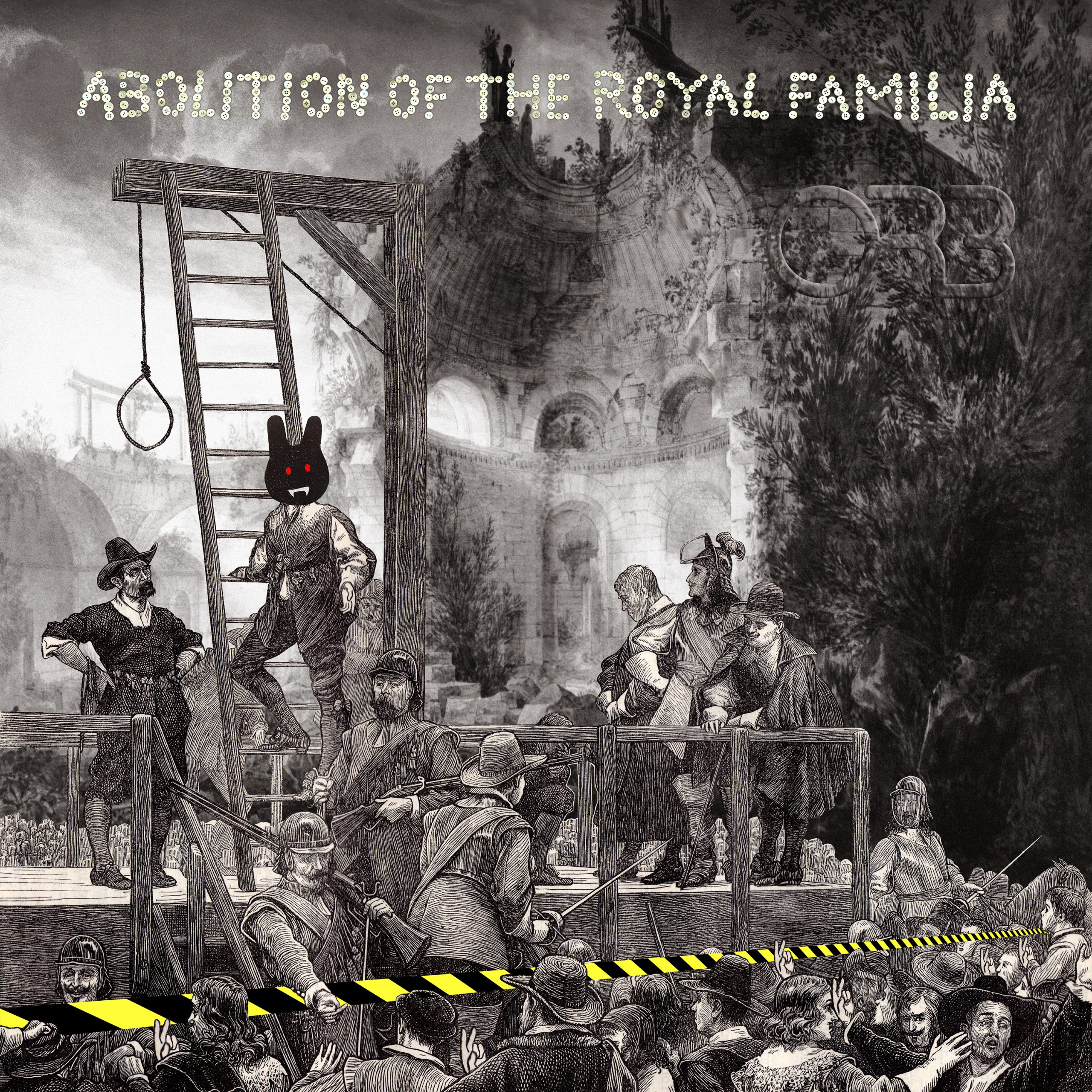 11. ‘The Weekend it Rained Forever’ – Oseberg Buddha Mix (The Ravens Have Left The Tower)

‘Abolition Of The Royal Familia’ by The Orb is out now.

Alex Paterson’s longstanding electronic titans THE ORB present the new album NO SOUNDS ARE OUT OF BOUNDS, which, as the title suggests, finds them embracing an anything-goes new approach to creative freedom. Refreshing and reinventing […]

Post-punk innovators, Jah Wobble and Youth have teamed up to release a new album on Cadiz Music licensed exclusively from the Youth Sounds label on the 28th of February 2020. ‘Acid Punk Dub Apocalypse’ was […]