Sonja Sleator has established herself as one of Northern Ireland’s most recognisable singer/songwriters. Her story-driven songs are making her one to watch in the Irish music scene and have led to appearances on local radio, television and at festivals including Hard Working Class Heroes. Sonja has performed across the UK and Ireland, most notably in London’s On’t Sofa Sessions. Outside the UK, she has performed in Nashville, New Orleans and San Francisco, including an appearance on the famous Norm’s Rare Guitars YouTube channel.

Her EP, ADAMS, released in 2017, was described as “one of the best releases of the year” by Dublin 98FM’s John Barker. Lead single, Calla, received radio play on Dublin 98FM, Near FM Sessions, Downtown Radio and Q Radio.

In 2018, Sonja released Ghost, the first single off a new EP titled Violent Strawberry. It achieved airplay across three continents and was used by festival organisers to promote her performance at Hard Working Class Heroes. Amanda Stock caught up with Sonja to discuss her new EP musical ideas and upcoming live shows. 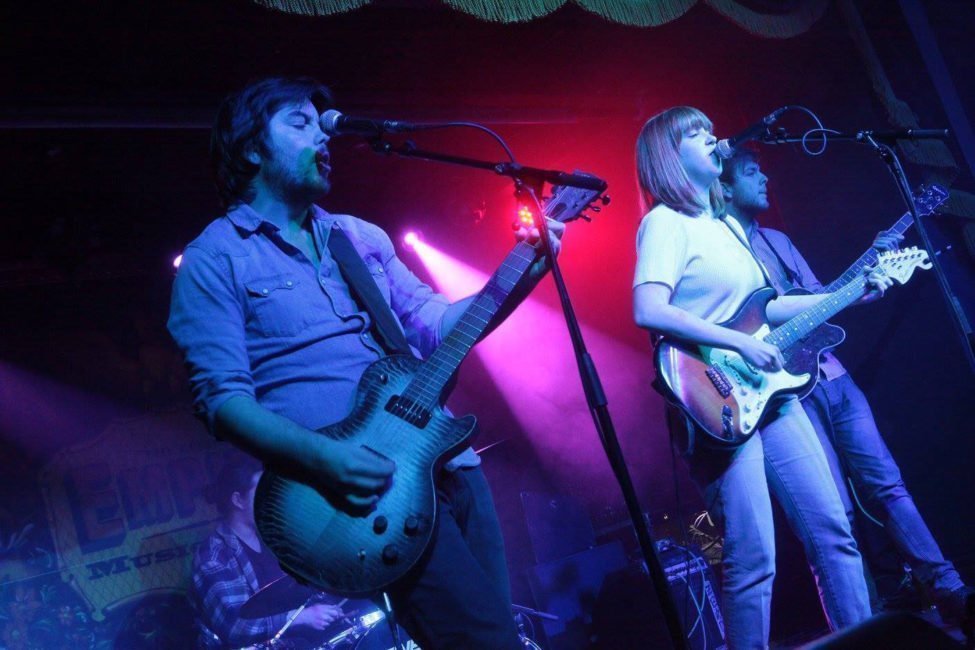 From what age did you start performing and writing songs?

I got my first guitar when I was around 14 or 15 years old, and pretty much straight away began writing. I can’t read music or tabs or anything, so I struggled at the beginning to learn covers and other people’s songs – it was easier to just write my own. I didn’t play those songs publicly though for a few years. I did a music performance course at Belfast Met and it went from there.

Who are your musical influences?

I have a lot of influences, but they aren’t always obvious in my songwriting or my sound. Radiohead, Bjork, McFly, Ryan Adams and Frank Turner are just a few that come straight to mind.

What is your songwriting process? Does it come easily to you?

If I can get a song together within the first half hour or so of working on it, then I usually get it finished. If it doesn’t happen quickly I’ll leave it, and take a break for a few days before starting fresh. I’d rarely come back to a song that didn’t work out quickly. I’ll usually start with some chords or a progression I like, and then hum a melody. I leave the voice recorder on my phone running and just keep playing and humming until some lyrics fall into place. The finished song is usually a mix of a few different tries, and then I record it once and bring it to my band who make it sound fabulous! 😉

I’m curious – what is the meaning behind the title of the new EP, “Violent Strawberry?”

It’s a bit of an inside joke between me and a friend… that’s all I can say on that.

How did the EP come about?

This wasn’t meant to be an EP! Last summer I had a bit of a burst and wrote the four tracks on it in a very short space of time, maybe even a few days. I had been in the studio with Ethan Hanna doing backing vocals on his album and Michael Mormecha, who produced that album, mentioned he had a couple of free days. So I booked them, went in and got it recorded. I hadn’t even planned to fully release it, but after I released Ghost and played Hard Working Class Heroes, the songs got a great reception so I figured I’d go for it.

I’ve also taken the decision with this EP not to put the full thing on Spotify and other streaming platforms. The singles are there, and I hope that anyone who likes them will buy the full EP.

Do you plan to tour?

Yes, I have a bunch of dates confirmed in places like Belfast, Derry, Dublin and Bangor. There are a few more things I’m working on a little further from home which I hope to be able to announce very soon!

Are there any launch plans apart from the headliner?

I wouldn’t even really call my Belfast gig a launch, I’ve just picked some bands I love and we’ve put on a show. Other than the gigs, I’m already working towards my next release and I’ve got studio time booked to record a few singles. I might even throw a few of the brand new songs into the upcoming gigs.

I love ” Goodbye” in particular – so haunting and beautiful, the video is a great match to the song – was this your first music video? Did you enjoy that part of the creative process?

Thanks very much 🙂 This wasn’t my first music video, but it was the first (and hopefully not the last) that I produced and shot myself. I really enjoyed the process and, working with my label Tin Man Heart, we came up with the idea pretty quickly and shot it the following day. It cost nothing, but I’m really happy with how it works with the song.

The songs seem very personal – do you write from personal experience?

I do, it really is that simple. I don’t know how to write any other way. From a young age, I always kept a diary. At that time I wasn’t musical, but all my thoughts ended up written down in some form. Everything in there was about my family or my life because those were the things that affected me and provoked me. I’m not a loud or vocal person, I keep things to myself, but my songwriting is where it comes out. My songs are like a three-minute window into my emotions. And then it’s over, and I’m quiet again.

What do you think of the Belfast music scene at the moment?

It seems for some people the Belfast music scene is great. Honestly, I’ve had more success elsewhere, particularly in Dublin and so, although I live in Belfast, my focus is more towards Ireland. There are great bands and songwriters in Belfast, and there is definitely the potential for something great, I just think don’t think everyone gets a fair crack at the whip.

Are you looking forward to headlining at The Pavilion on 20th April?

I’m really looking forward to playing the Pavilion gig – we plan to shake some things up on the night. My name is at the top of the list, but there is no set running order and I consider all of the acts on the night to be headliners in their own right. You’ll just have to be there on the night to know who goes on when!

Is there anyone you would like to collaborate with?

No. I find it really difficult to collaborate. I’ve had lots of conversations with other musicians about this, and only one or two others feel the same as I do. The most I do is with my band. As you mentioned my songs are very personal, so involving someone in the writing process wouldn’t really work.

I’m usually at work! Gotta pay the bills. I’m a bit of a coffee fiend, so I’ll maybe go sit with my parents for a bit and have a coffee and a chat if I’m not at work. Also a huge fan of Friends still being on Netflix.

Do you have a record that you always turn to?

I listen to music mostly when I’m in the car, so the albums I have are constantly changing. Dido’s White Flag is in there, along with Hozier and David Gray. But Good Charlotte are in there too, with McFly! So it really depends on the mood I’m in and what kind of day I’m having. I wouldn’t say I have a “go to” album.

I love Vampire Weekend’s new single, I can’t wait to get the album and spend some time driving with it. Hozier’s new album has been on pretty constantly too which I love. More locally, I supported Daniel John Paxton in Dublin and his single Railway has been in my head for about a month. Also in Dublin, A. Smyth has been putting out some great stuff and I hope he comes up to Belfast soon so I can see him again. I played a show recently with alternative ambient folk troubadour Joel Harkin – he’s fantastic, one of the best live shows I’ve seen in ages, and a great man to have on a
car journey too! 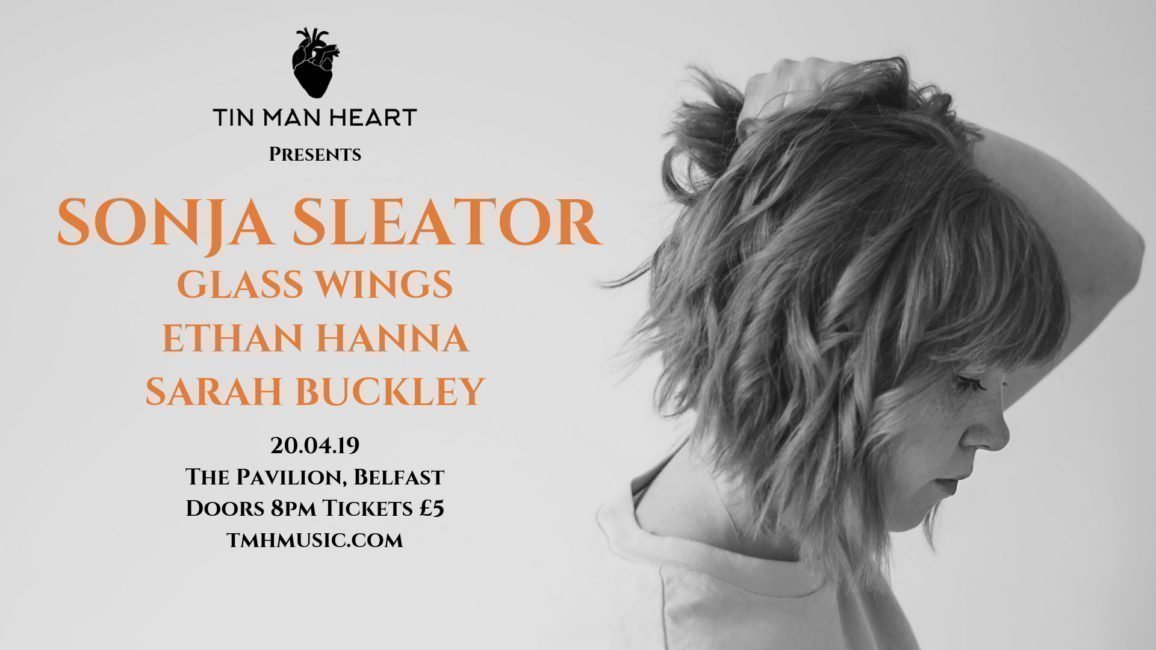 Sonja Sleator releases her new single Runaway today, June 20th 2019. Runaway is the first new music from the Belfast-based artist since the release of her third EP, Violent Strawberry, in April this year. On Runaway Sleator says, “This song is a […]

Sonja Sleator returns with new single, Orion with an accompanying video shot and produced by the artist on Achill Island on Ireland’s west coast. The single and video will be released on all channels on […]

XS Noize has teamed up with Belfast based PR and promotions company Tin Man Heart to bring some of Ireland’s best upcoming talent to the city. Together, we have arranged a series of unmissable gigs […]