Mercury Prize-winning, British band Gomez release the 20th-anniversary release of their triumphant second album ‘Liquid Skin’ on July 12th. Abbey Road’s Frank Arkwright has delved into the archives to remaster ‘Liquid Skin from the original tapes which will be released digitally & as a special 2CD / 2LP standard & coloured edition featuring 19 unreleased tracks. Mark Millar caught up with Gomez frontman Ben Ottewell to talk about the reissue.

Gomez celebrates the 20th anniversary of your second album Liquid Skin. Is it hard to believe it’s been that long?

BO: Yeah – it is pretty hard to believe it’s been that long for sure.

Your debut album Bring it On was a huge success even winning Mercury Prize in 1998 for Album of the Year. Did that change the way the band went into the recording of Liquid Skin?

BO: I don’t know – it changed in so much that we had a broader palette from which to work from. We could spoil ourselves – we got to go and record in Abbey Road for a little bit, which was great. Essentially, the approach aside, from the locale was pretty similar. We already had the bare bones of a lot of the songs that were on ‘Liquid Skin.’ A lot of them were written at the same time as songs like ‘Rhythm & Blues Alibi,’ and also obviously the song ‘Bring It On.’

Did you expect to win the Mercury Prize?

BO: Not at all, we were so drunk that it was pretty hard to get up to the stage and accept the thing. We were treating the whole thing as a free knees up. Our drummer Olly Peacock had money on it, so he did alright out of it. Obviously, it was a fantastic thing – it did us no end of good.

Bring It On was recorded in a garage in your hometown of Southport on a four-track recorder. What was it like going from that to recording ‘Liquid Skin’ in expensive recording studios around the world with an orchestra?

BO: It was great, with ‘Bring It On’ we originated with demos and built on those, and did go into a recording studio with that album. Looking back over it now the whole thing seems like a continuation. It was such a rollercoaster, at that point, because we released the record and went on tour for the very first time, we had only done one gig before we got signed. We went on the road, and we were in and out of the studio recording B sides for some singles from ‘Bring It On,’ and it seemed that it all merged together, and all of a sudden only a year later we were back in the studio. We did a lot of it in Parr Street and some strings in Abbey Road – it was a fantastic time, but it felt like part of the same journey. We had bits and pieces of ‘Liquid Skin’ in the bag already. Our horizons were broadening in a lot of respects – it was the first time I had ever travelled. My first trip away from home was a press trip to Paris, and that was all feeding back into it as well – It was a great moment for the band.

Liquid Skin went to Number 2 in the UK Album Chart on its release in September 1999, but Gomez never appeared on Top of the Pops. Do you wish you had?

BO: I know we didn’t, I think we had an opportunity with ‘Rhythm & Blues Alibi’ – it was the song that charted the highest, but I think we were in the states and it just couldn’t work to appear on the show – its a shame because they canned it pretty soon after that. I would have loved to mime on TV – that would have been great. (Laughs)

The new Liquid Skin deluxe 2CD will include five previously unreleased tracks, 4 previously unreleased alternate versions and nine live tracks recorded at The Fillmore in San Francisco in 2000. Was it enjoyable going through the archives to put the reissue together and did you uncover any gems?

BO: Yeah, it was surprising, to be honest. Ian took care of a lot of that – he’s kind of become the bands’ archivist just because his Dad had a lot of the tapes in his attic in a shoebox. (Laughs) I had genuinely forgotten about a lot of that stuff like ‘Throwing Myself Away,’ and things like that – terrific songs. It’s funny because you look at your decision making back then and think; “why didn’t we pursue this?” Because we were on such a roll, but I think we were trying to be purposely a bit weirder. Any good songs we had, we thought; “Well its a bit too normal.” (Laughs) It was an interesting time, and we did some great stuff.

My favourite song on the album has always been ‘We Haven’t Turned Around.’ What can you tell me about writing and recording that song?

BO: Again that song had been around for a long time, it was initially called ‘Canderel’ after the jazz guitar player, and the chorus was totally different. Me and Ian wrote that – it was one of those slow-burning songs, and eventually Ian came up with a chorus and it steadily built from that. That was when we went to Abbey Road to use the strings. All of a sudden, we were in a room with thirty string players telling them what to do. (Laughs) I don’t think one of us could read music – it was exciting and a great experience.

Gomez has a very unique sound like no other band you must be proud of that.

BO: Yeah, I’m certainly proud of what we did together for sure. That was the whole idea to make something unique. It’s not the easiest thing to do with music, because you have only got a specific palette you can draw from, so I’m proud of the way we did that and stayed true to that kind of ethos.

Gomez will tour Australia and New Zealand later in the year and will perform both Bring It On and Liquid Skin in their entirety. Is there a particular album by a band that you would like to see performed in its entirety?

BO: Id love to see JJ Cale perform his album ‘Troubadour’ in some smoky club and maybe Led Zeppelin 2 – that would be awesome.

Do you approach songwriting for your solo work differently than you do with Gomez?

BO: Yeah, it gives me a chance to write about different stuff. I think no matter how close you are with people when you are collaborating, and when you are young, you have a touch of self-conscious that you write a bit more ambivalently. Which I always like in songwriting anyway when you’re not quite sure – you are writing imagery rather than directly to the point. There was a lot of times in Gomez we would write more general songs rather than personal songs.

Have you been writing with the band recently? Will there be a new Gomez album soon?

BO: Yeah, we had a writing session in January, Ian flew over, and me Tom and Ian got together and started a preliminary writing session for another record. Hopefully, we will be able to do that again later in the year and have something out in 2020.

BO: I would say that JJ Cale’ Troubadour’ is one that works anywhere for me. It’s just a masterpiece in simplicity. I would love to be that simple and not be straightforward. It’s so densely complicated but at the same time so mellow and straightforward. I always return to that. 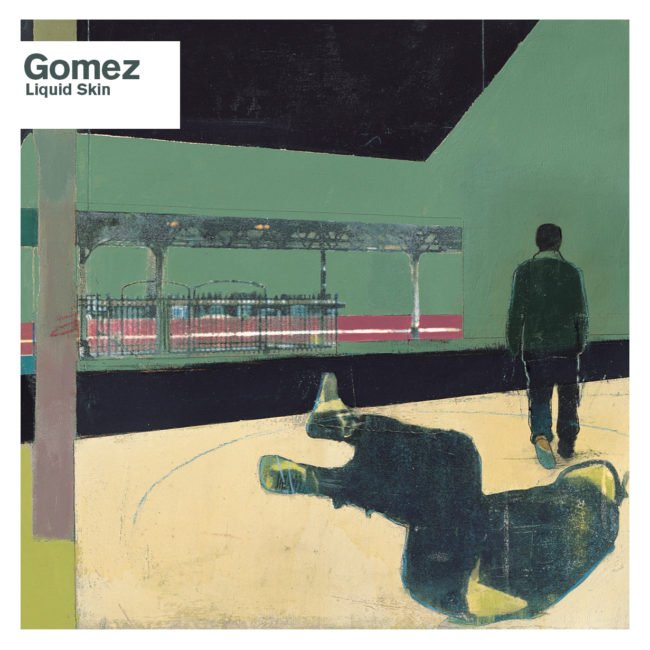 In support of the release, Gomez has also recently announced a string of special headline dates and festival performances this July such as Latitude, Kendall Calling and London’s Shepherd’s Bush Empire. The band also tour Australia and New Zealand later in the year and will perform both Bring It On AND Liquid Skin in their entirety at both the Auckland and Brisbane shows. All dates are listed below.

Adding a dose of rootsy American influences to memorable British pop melodies, the genre-blending Gomez seemed determined to provide the indie scene with something more wide-ranging and dynamic when they arrived in the late 90s. […]

A monthly look back at the music we were listening to exactly twenty years ago. All of these singles were released back in June 1998. You can read a bit about each individual track and […]