Il Divo has announced a fully seated show at Dublin’s 3Arena on 17 June 2019. Tickets go on sale this Friday at 9 am. IL DIVO celebrates their 15th Anniversary with their TIMELESS tour. The tour is an incredible fan experience of the new TIMELESS album and IL DIVO’S extensive catalogue of song interpretations.

Il Divo has evolved into the pre-eminent tenor powerhouse vocal group with over 30 million albums sold, 160 gold and platinum albums in 33 countries to their credit and were the first Classical Crossover artists to have an album debut at #1 on Billboard’s Top 200 chart.

TIMELESS, the group’s 7th album, was released on Decca Gold with a #1 debut on Billboard’s Classical Crossover charts.

Tickets from €58.50 including booking and facility fees go on sale this Friday at 9 am. 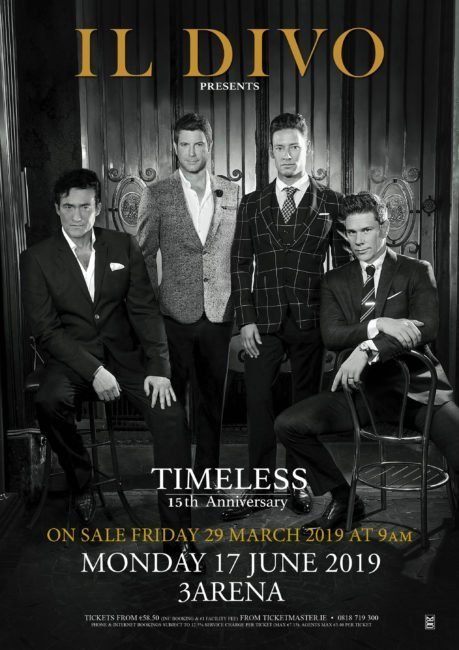 In support of the release of his 30th studio album Blood Red Roses, Rod Stewart is hitting the road in 2019 and will be extending his tour to include shows at The SSE Arena Belfast...

The Lumineers announce a new UK and European tour for 2022 which includes Dublin's 3ARENA on 27th FEBRUARY 2022. The band also release a live EP recorded on the last night of their tour before...