They’ve been compared to tornadoes, firecrackers, and lightning storms, and described as genuine, unapologetic, and down-to-earth. And today Alex Luciano and Noah Bowman of gutsy rock duo Diet Cig are excited to announce the forthcoming release their sophomore full-length, Do You Wonder About Me? on May 1st via Frenchkiss Records. They are also happy to share the newest single off the LP, lead track “Thriving,” and note, “Thriving” is a cathartic, campy release of feelings. It's about the duality of absolutely THRIVING without someone but also desperately wanting them to notice you doing so. Inspired by the melodrama of reality TV and musical theatre, we wanted the song to bounce back and forth between a lavish personal anthem and the anguish of feeling forever beholden to others opinions.”

“Thriving” is the follow up to last month’s “Night Terrors” which was included on NPR’s “All Songs” broadcast week of release. Stereogum proclaimed it “quite a comeback” further noting, “the real powerhouse of this track is the drums, which launch the atmosphere headlong into weightlessness...meek vulnerability in the daintiness and girlishness of the vocals add an irresistible sweetness.” Uproxx included the song in their “best of the week” and said, "with their signature powerful guitar chords and crashing cymbals, ‘Night Terrors’ gives fans a look into the band’s new era."

Listen to 'Thriving' - BELOW:

Diet Cig’s live shows are a whirlwind of belting and high-kicks, their pure energy as yet unmatched. The band have confirmed their first set of North American and UK dates in support of the new album as well as announcing an in-store performance on April 30th at London's Rough Trade East. Tickets for the newly announced shows will go on sale Friday, March 6 at 10 am local time.

Do You Wonder About Me? Is the follow-up to 2017’s Swear I’m Good At This. The new record marks a more intentional, self-assured Diet Cig; not only in Luciano’s radically intimate, acerbic lyrics but in the duo’s sound as well. Luciano and Bowman moved to Richmond, VA in the summer of 2017 as a place to “hideout and make music,” and it was there that they wrote Do You Wonder About Me? Diet Cig’s ode to growing up.

"We spent a lot of time after the first record growing as people, being humans outside of tour for a little bit, and trying to shed the imposter syndrome,” Luciano says. Spending the time to make the kind of music they really wanted to make and making sure they felt good about it was crucial to the success of tracks like “Night Terrors.” It’s a slower-paced song than Diet Cig’s usual, but just as biting; a song about reckoning with all the past versions of yourself. As Luciano puts it, “Am I still these people, or have I shapeshifted?” It’s essentially the thesis of Do You Wonder About Me? considering and accepting the embarrassing aspects of your identity, and how they’re just as much a part of you as the good stuff.

“When we made our first record we almost felt like we had something to prove,” Luciano says. Much of it was written on tour—the kinks in the songs worked out by playing them live. But the writing and recording of Do You Wonder About Me? was imbued with more freedom. Diet Cig had the sense that they could make whatever they wanted. Luciano and Bowman, instead of practising live to an audience, worked on their songs over the course of a year in their practice space, and ended up finishing tracks with their longtime producer Chris Daly at Headroom Studios in Philadelphia, PA, and back in New Paltz, NY at Salvation Recording. Instead of making sure they’d fit their live show, Diet Cig tinkered with songs until they felt right to them. As a result, Do You Wonder About Me? has a freshness, a gleaming new direction. Fewer boundaries. More truth, more honesty. 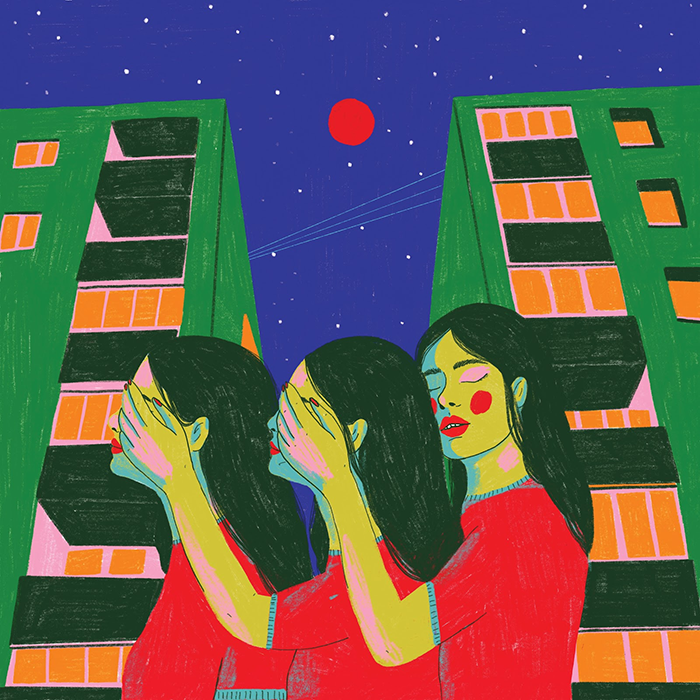 Do You Wonder About Me? Tracklist: