Some things are worth the wait. It’s been nine years since Bright Eyes released new material. Today, they unveil the first recording from their recent studio sessions, “Persona Non-Grata”. The band, who revealed they’d re-grouped after a lengthy hiatus in February by announcing a world tour, issued the following statement with the track: 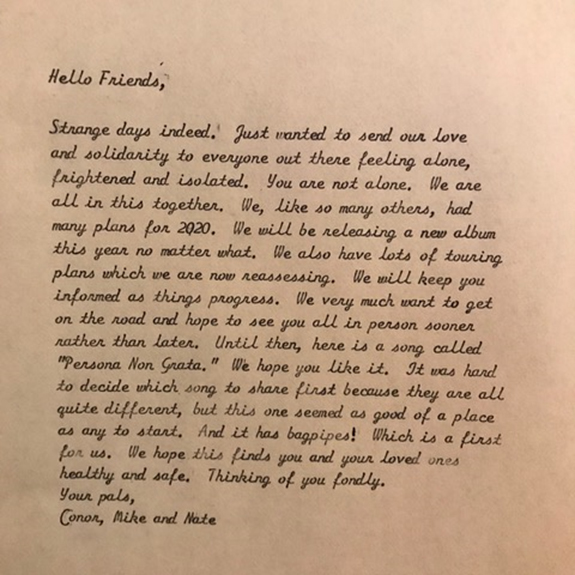 Sometimes it feels like you hear a Bright Eyes song with your whole body. From Conor Oberst’s early recordings in an Omaha basement in 1995 all the way up to 2020, Bright Eyes’ music tries to unravel the impossible tangles of dissent: personal and political, external and internal. It’s a study of the beauty in unsteadiness in all its forms – in a voice, beliefs, love, identity, and what fills up the spaces in-between. And in so many ways, it’s just about searching for a way through.

The year 2020 is full of significant anniversaries for Bright Eyes. Fevers and Mirrors was released 20 years ago this May, while Digital Ash in a Digital Urn and I’m Wide Awake It’s Morning both turned 15 in January. The latter, a singer-songwriter tour-de-force released amidst the Bush presidency and Iraq war, wades through incisive anti-war rhetoric and micro, intimate calamities. On the title track and throughout the record, Oberst sings about body counts in the newspaper, televised wars, the bottomless pit of American greed, struggling to understand the world alongside one’s own turmoil. In its own way, I’m Wide Awake It’s Morning carved out its place in the canon of great anti-war albums by being both present and prophetic, its urgency enduring 15 years later.

Listen to ‘Persona Non-Grata’ – BELOW:

In 2011 the release of The People’s Key, Bright Eyes’ ninth and most recent album, ushered in an unofficial hiatus for the beloved project. In the time since, the work of the band’s core members – Oberst, multi-instrumentalist Mike Mogis, and multi-instrumentalist Nathaniel Walcott – has remained omnipresent, through both the members’ original work and collaboration.

And while 2020 is a year of milestones for the band, it’s also the year Bright Eyes returns, newly signed to indie label Dead Oceans. Amidst the current overwhelming uncertainty and upheaval of global and personal worlds, Oberst, Mogis, and Walcott reunited under the moniker as both an escape from, and a confrontation of, trying times. Getting the band back together felt right, and necessary, and the friendship at the core of the band has been a longtime pillar of Bright Eyes’ output. For Bright Eyes, this long-awaited re-emergence feels like coming home.

Today, Bright Eyes have shared details of a forthcoming world tour, with an extensive run across North America. Full list of dates below. Tickets on-sale February 21st at 12:00 PM EST. After a 9 year […]

You know a singer/songwriter has achieved “cult” status when every side project they do despite seldom publicity receives mass interest and each live show they do sells out. The singer/songwriter in question is Conor Oberst […]