It’s been almost ten years since Bright Eyes last performed a show together (in Honolulu on 11/21/2011), but tonight they’re back together - with some additional friends - to play their brand new single “ Mariana Trench ” on The Late Show With Stephen Colbert. Today’s single release comes with details of the band’s long-awaited tenth album, and first since 2011, Down In The Weeds Where The World Once Was, to be released on Dead Oceans on August 21st.

The news has been a long time coming for fans who were first alerted to new material in January when the long-dormant social media accounts were revived with new images. A steady march of captivating songs released over the past few months has ramped up the excitement - first with the melancholy nostalgia of “ Persona Non-Grata”, then with the slick near joyous fever dream of “ Forced Convalescence ” and most recently with the elegant orchestral “ One And Done ”. “ Mariana Trench ” rattles with anxiety, its epic sprawl exploding with the forward-chugging momentum of syncopated brass. Bright Eyes are back at exactly the moment we need them most.

The mesmerizing video for “ Mariana Trench” was created by Art Camp. Speaking on the creation of the video, Art Camp states: “ The production of the video started at the beginning of quarantine and finished as people came back out of their homes and took to the streets together. In 18 different bedrooms across the world, listening to Bright Eyes, keeping each other company, we got the chance to collaborate on a story about embracing and celebrating change. The animation is composed of 2,200 hand-illustrated ink paintings based on original 3D animation and archival footage. We hope it makes you excited to imagine that everything could be new. ”

Check out 'Mariana Trench' - BELOW:

As a title, as a thesis, Down In The Weeds Where the World Once Was functions on a global, apocalyptic level of anxiety that looms throughout the record. But on a personal level, it speaks to rooting around in the dirt of one’s memories, trying to find the preciousness that’s overgrown and unrecognizable. For Conor Oberst, coming back to Bright Eyes was a bit of that. A symbol of simpler times, vaguely nostalgic. And even though it wasn’t actually possible to go back to the way things were, even though there wasn’t an easy happy ending, there was a new reality left to work with.

In 2011 the release of The People’s Key, Bright Eyes’ ninth and most recent album, ushered in an unofficial hiatus for the beloved project. In the time since, the work of the band’s core members – Oberst, multi-instrumentalist Mike Mogis, and multi-instrumentalist Nathaniel Walcott – has remained omnipresent, through both the members’ original work and collaboration. The friendship remained solid and their projects overlapped from time to time, with Oberst and Mogis living next door to one another in Omaha and Walcott’s Los Angeles home just fifteen minutes away from Oberst’s house on the East Side, where he’s spent the bulk of his time over the last few couple of years whilst working on his most recent solo records and Better Oblivion Community Center.

The end of Bright Eyes’ unofficial hiatus came naturally. Oberst pitched the idea of getting the band back together during a 2017 Christmas party at Walcott’s house. The two huddled in the bathroom and called Mogis, who was Christmas shopping at an Omaha mall. Mogis immediately said yes. The resulting Bright Eyes album came together unlike any other of its predecessors. Down In The Weeds is Bright Eyes’ most collaborative, stemming from only one demo and written in stints in Omaha and in bits and pieces in Walcott’s home. Radically altering a writing process 25 years into a project seems daunting, but Oberst said there was no trepidation: “ Our history and our friendship, and my trust level with them, is so complete and deep. And I wanted it to feel as much like a three-headed monster as possible .”

In spite of all its newness, the LP feels like the most complete amalgamation of Bright Eyes. The symphony’s presence recalls Walcott’s orchestral arrangements on Cassadaga, while hyper-percussive elements and effects conjure Digital Ash. The jolting intimacy of Oberst’s singular voice and its folk songwriting core are the same foundations of Lifted and I’m Wide Awake. And overblown acoustic guitar marks Mogis’ production reaching back in time to the original recordings Oberst made on a 4-track 25 years ago.

Across recording sessions between Omaha’s ARC Studios, Los Angeles’s Electro-Vox, and LA’s Capitol Studios, the trio leaned into experimentation, yielding an ambitious, musically inventive LP. Aside from the surprising rhythm section made up of the fierce musicianship of Jon Theodore (Mars Volta, Queens of the Stone Age, One Day as a Lion) and the Red Hot Chili Peppers’ Flea, the compositions expand the expectation of what Bright Eyes’ sound is.

Down in the Weeds Where The World Once Was is an enormous record caught in the profound in-between of grief and clarity – one arm wrestling it's demons, the other gripping the hand of love, in spite of it. 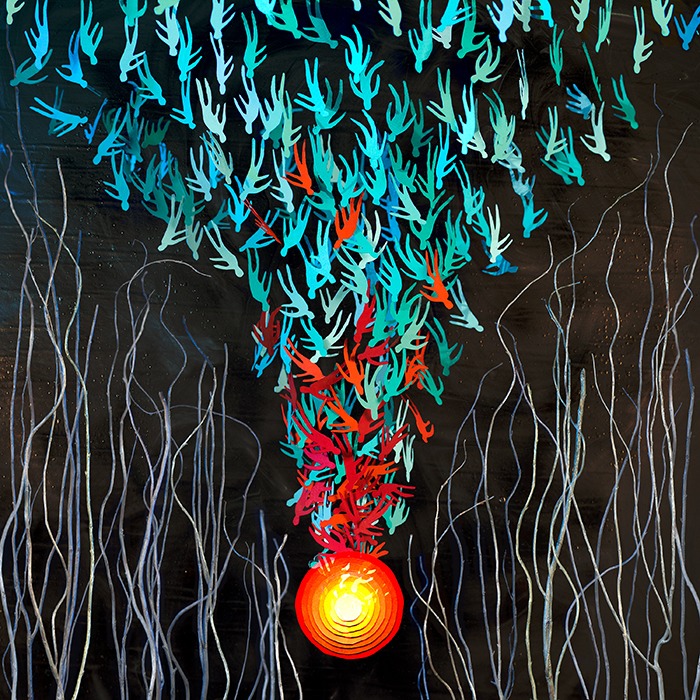 You know a singer/songwriter has achieved “cult” status when every side project they do despite seldom publicity receives mass interest and each live show they do sells out. The singer/songwriter in question is Conor Oberst...

Some things are worth the wait. It’s been nine years since Bright Eyes released new material. Today, they unveil the first recording from their recent studio sessions, “Persona Non-Grata”. The band, who revealed they’d re-grouped...

Today, Bright Eyes have shared details of a forthcoming world tour, with an extensive run across North America. Full list of dates below. Tickets on-sale February 21st at 12:00 PM EST. After a 9 year...