Much loved songwriter, former Inspiral Carpets icon and one-of-a-kind eccentric: TOM HINGLEY, is back with an exclusive new live album and DVD of performances with his outstanding current outfit: The Kar-Pets.

The Kar-Pets are a tribute band. And as you may have guessed, a band that pays tribute to the organ-crazed pop smashes of Inspiral Carpets at that. However, The Kar-Pets are a band in no need of raiding the fancy dress box anytime soon, for they just happen to have the real McCoy making up their ranks...

Fronted by the former voice and creative force of the Inspiral Carpets himself, Tom Hingley, this is a tribute band that packs far more pedigree than your usual pub-circuit wannabes. Having toured the country to great acclaim with this barmy, yet brilliant new band - 'May Contain Nuts’ - is a live multimedia DVD/CD where Tom and the Kar-Pets shatter any pre-conceptions of the tribute-band notion and show you exactly what they're made of. 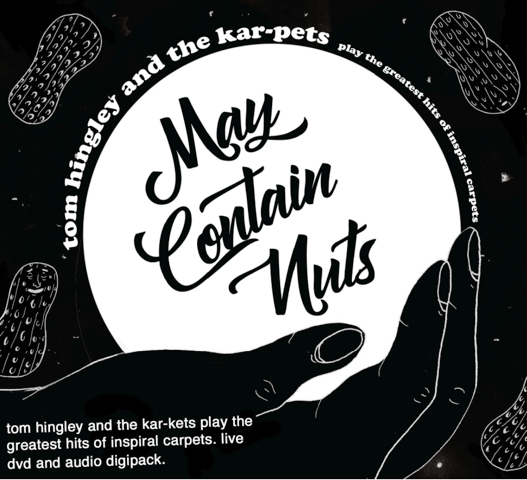 Recorded at the sold out show at The Ruby Lounge in Manchester on April 16th 2016, this release encompasses a live DVD plus an audio CD of the gig in a deluxe new 2 disc pack. Offering a unique take on the Inspiral Carpets back catalogue from greatest hits to beloved album tracks, this is a DVD that captures the band at their exhilarating and eyebrow-raising best, with pumped-up performances of classic tracks such as “Saturn 5”, "Bitches Brew”, “Find Out Why” and many more.

Tom Hingley was the lead singer for the most commercially successful period of Manchester trailblazers Inspiral Carpets’ career, between 1989 (joining for the band’s sensational ‘Life’ album, which featured their #14 charting anthem “This Is How It Feels") and 1995 (departing following the release of their seminal 'Devil Hopping’ LP at the height of the Brit-Pop phenomenon). Tom left the Inspiral Carpets to forge a career as a solo artist and has been creating new music under his solo moniker. Highlights from Tom’s career have included 2000’s debut solo album 'Keep Britain Tidy', plus individually lauded follow up records such as 'Thames Valley Delta Blues' (2009) and ‘Paper' (2013). Tom has also produced two albums and a smattering of EPs and since releases with The Lovers, plus contributed a special charity release for Record Store Day, Beggar’s Hand, with his Tom Hingley Band project - all of which have added to a rich and varied oeuvre of work.

Most recently - Tom has been touring the country to great acclaim with his unusual new outfit The Kar-Pets, revisiting classics from his Inspiral’s days and revamping them in his own vision for the 21st Century.

Today, the SHIIINE ON WEEKENDER announces its phenomenal lineup for 2021. Staking its place as a stalwart of the UK’s Winter festival scene, the Shiiine On Weekender returns for its sixth instalment on the 12th,...

Tom Hingley is an English singer, songwriter and guitarist, best known as the frontman of Inspiral Carpets. After six successful years, Inspiral Carpets split in 1995 and Hingley started performing as a solo artist. Hingley...

COUNTING DOWN TO THE... GIGANTIC INDIE ALL DAYER VOL.2 SATURDAY 23rd MAY 2015

One May Bank Holiday down, one GIGANTIC one it's time to get excited for one of huge proportion still to come as we count down to the... GIGANTIC INDIE ALL DAYER VOL. 2. Gigantic by...