Continuing the blazing trail set by 2015's acclaimed Modern Blues and 2017's top ten-reaching double album Out Of All This Blue, on May  24th  The Waterboys will release their new album Where The Action Is, via Cooking Vinyl. Its title inspired by the chorus of Robert Parker’s 1960s mod / northern soul classic "Let's Go Baby", Where The Action Is is a 10-song, genre-defying album, testament to the enduring talents of the band’s founder and frontman Mike Scott. One of the finest British songwriters of the past four decades, his songs have been covered and/or recorded by artists including Prince, who crafted two different arrangements of Scott's classic "The Whole Of The Moon", Rod Stewart, Tom Jones, Steve Earle , and Ellie Goulding , who had a number three hit in 2013 with "How Long Will, I Love You".

The title track’s update of the Parker classic – with lyrics to reflect Mike’s own preoccupations – is a cyclone of a song, all swirling Hammond, lead guitar solos played by Steve Wickham on his fuzzboxed-up fiddle, and female vocals provided by the band’s fabulous Jess and Zeenie.

More visceral rock’n’roll follows on London Mick, a tribute to legendary Clash guitarist, Mick Jones. This little stomper is rendered in Mick’s own style circa 1977. A companion piece comes in the shape Of Ladbroke Grove Symphony, a brilliant paean to the former Bohemian heart of West London.

The first single from the album, " Right Side Of Heartbreak (Wrong Side Of Love)," was recorded by Mike at home, guitar and vocal into a single microphone, then sent to Waterboys' keyboard whizz Brother Paul who added the soundscape, beats and effects at his studio in Nashville. An understated, yet infectious, soulful number addressing the trials and tribs of love, it is one of the album’s standout moments. Further experimentation can be found on "And There Is Love" (a collaboration with brilliant English producer Simon Dine ) and "Take Me There I Will Follow You" , with its multi-rhyming lyrics over Brother Paul’s beats.

Watch the lyric video for the first single "Right Side Of Heartbreak (Wrong Side Of Love)" - BELOW:

Where The Action Is also features a song called "Out Of All This Blue", the title of the last album. Recorded for that record, but not nailed, Mike revisited it last year with some changes of style. Written for a friend who's been to a dark place, the result is a compassionate song of reassurance.

The centrepiece of the album is "In My Time On Earth", impassioned, raw and poetic, in which Mike casts a cold eye over the present day cultural landscape. The chorus tells the secret of the heart, a divine mystery which hides in plain sight.

The two closing songs are inspired by towering literary figures. "Then She Made The Lasses-O" is based on Robert Burns’ poem Green Grow The Rashes-O and the album’s final track is "Piper At The Gates Of Dawn".

This is a reading of the most beautiful part of the chapter of the same name from Kenneth Grahame's famous book The Wind In The Willows. Cut last summer in a single instrumental take at Real World Studios, with Mike adding the vocal in Dublin, the combination of Scott's exquisite and emotive reading and the wondrous soundscape provided by Brother Paul and Steve Wickham, bassist Aongus Ralston and drummer Ralph Salmins makes a transcendent piece and an extraordinary ending to the album.

Diverse in breadth, Where The Action Is is an album of incredible songwriting, experimentation and musical brilliance. It will excite Waterboys fans and new converts alike. 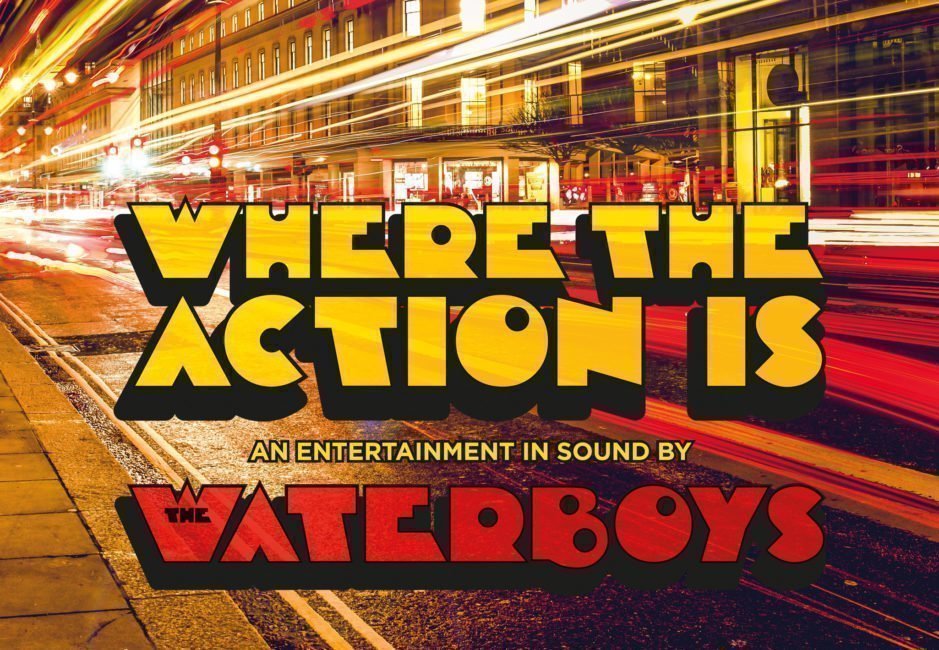 Where The Action Is tracklist:

1. Where The Action Is
2. London Mick
3. Out Of All This Blue
4. Right Side Of Heartbreak (Wrong Side Of Love)
5. In My Time On Earth
6. Ladbroke Grove Symphony
7. Take Me There I Will Follow You
8. And There’s Love
9. Then She Made The Lasses-O
10. Piper At The Gates Of Dawn

The Waterboys tour the UK in May and throughout the summer:

Wilco and The Waterboys will top the bill at Black Deer Festival in South East England, next June. Jeff Tweedy and co - who released their 11th studio album 'Ode To Joy' this month -...

The Waterboys follow the recent release of their current upbeat pop single ‘The Soul Singer’ with the gorgeous counterpoint of ‘Low Down In The Broom’. It is accompanied by a mysterious and atmospheric video that...

Ladbroke Grove Symphony is a tribute to the former Bohemian heart of West London, in which Mike Scott invokes his time living and writing among the crumbling, seaside-esque streets of Notting Hill during the 80s....