When Guns n' Roses go on tour, it's big news. When they eventually get around to releasing their long-promised new album, it will be even bigger news - but we know from past experience not to hold our breath about the prospects of that! If you're a GnR fan, you'll already know that the band is going to spend almost all of 2020 touring the world, and given the size and legendary status of the band, you probably wouldn't care too much about who the support act is. Seeing Guns n' Roses is worth the value of the ticket alone, and who would be brave enough even to try to open for them? The answer to that question, as it turns out, is Billy Corgan.

In a move that’s surprised quite a lot of music industry insiders, it’s been confirmed that the Smashing Pumpkins - another band who know a thing or two about acrimonious break-ups and long hiatuses - will do the honors for Axl Rose and friends on a select number of North American dates during the tour. They’ll be playing six nights in total, all of which will happen during the tour’s July leg.

The marriage of Guns n’ Roses and the Smashing Pumpkins looks like an odd one on paper. The bands don’t appear to have much in common when it comes to sound, style, or fan base. Guns n’ Roses have always been a loud, brash, and ultra-commercial rock band. While their authenticity has never been called into question, you don’t mind most rock bands licensing their music out to online slots games in the way that Guns n’ Roses have. We can’t imagine Billy Corgan ever signing off on the idea of the Smashing Pumpkins back catalogue being used to soundtrack slots. Now we’ve written that down we’ve decided we quite like the idea of a Smashing Pumpkins online slots game, but we can’t imagine it ever happening.

The Smashing Pumpkins, on the other hand, are almost shy. Their music is more thoughtful, their style is more introspective, and had they started making music in another era, they would doubtless be categorized as an emo band. The sight of bandana-wearing Guns n'Roses fans standing side by side with Smashing Pumpkins fans wearing thick eyeliner at the front row of concerts will be an unusual one, but perhaps that only helps to make this feel like a once-in-a-lifetime event. When and where else, outside of going to see a rock covers band, would you get the chance to hear 'Welcome to the Jungle' and 'Bullet with Butterfly Wings' played live on the same night, in the same venue?

While the tour is undoubtedly even more must-see than it was before this news was announced, the hope for a new Guns n' Roses album being released this year appears to grow dimmer with every passing day. Late last year both Slash and Duff McKagan were upbeat about the prospects of the new record seeing the light of day, confirming that the band had been in the studio and that new material had been both written and recorded, but in late January Slash tried to walk some of his previous comments back. Citing 'changes in the music industry,' he said that it was no longer clear when or if they would be able to release the album to the public. Whatever the current issue is, we hope that the band is able to overcome it sooner rather than later. We struggle to imagine what kind of music industry issue could stop them from releasing anything - they're Guns n' Roses, and they've surely earned the right to do what they want.

The Smashing Pumpkins, on the other hand, don’t appear to have any such concerns when it comes to releasing new material. Corgan, who at this point is the only permanent member of the band after falling out with pretty much everybody who used to collaborate with him (although he’s back on good terms with James Iha), has confirmed that a brand-new double album will be released later in 2020. So far, 21 songs have been written for the album, and so we're envisioning a modern take on their classic 'Melon Collie and the Infinite Sadness,' which was the soundtrack to many an angsty teenager's developmental years during the 1990s. Corgan has stated on numerous occasions that the band's last release in 2018 was 'rushed' and was done just for the sake of getting something out there, but he feels this forthcoming (and thus far nameless) release is truer to the band's style. 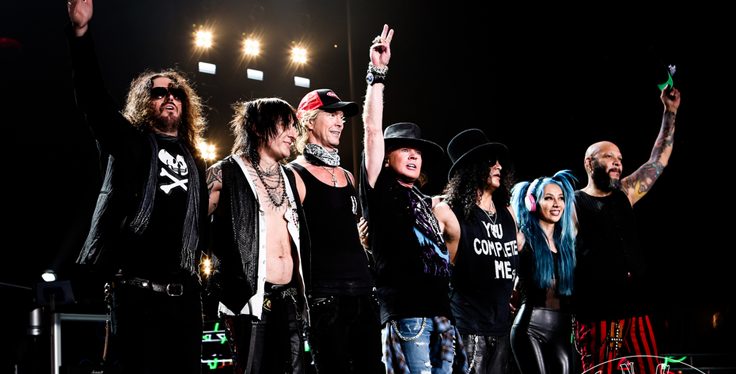 It's surprising that Corgan has the time to write and record music at all anymore, let alone tour it. Since 2018 he's been the owner and president of the National Wrestling Alliance, the pro wrestling promotion that once attracted television audiences of millions during the 1970s and 1980s. Corgan has been hard at work trying to find a new televised home for his promotion, as well as running weekly shows and pay-per-view events on YouTube. The rock legend has so far resisted the urge to climb into the ring and get involved in the grappling action himself, but by this point, we've learned never to rule anything out where he's concerned.

One person who won’t be taking part in the Guns n’ Roses shows - or showcasing any of their talents on the album - is former bass player D’arcy Wretzky. She recently told Alternative Nation that she hadn’t been invited to the band’s reunion tour in 2018, and hasn’t had contact with Corgan for a number of years, going on to say that her relationship with him was non-existent. Corgan, countering her claims, says that she was invited on the tour but chose not to come. Jimmy Chamberlain, however, is signed up and ready to play. It’s not quite the classic Smashing Pumpkins lineup, but it’s as close to it as we’re ever likely to get.

If you've been eager to get tickets to see Guns n' Roses on this tour and you've been wondering which leg of the tour to jump on, perhaps now you have your answer. Two legendary rock bands in the same place at the height of summer? Yes, please!

Among prominent bands of the 90’s, Billy Corgan, Jimmy Chamberlin, D’Arcy Wretzky and James Iha stand up as one of the better and more groundbreaking ones. As the Smashing Pumpkins they had a mix of...

The most famous name is rock n roll, singer-songwriter, musician and lead guitarist in the world’s biggest band Guns N Roses, SLASH is pleased to announce his largest Belfast headline show to date at Belsonic...

Guns N’ Roses return to Slane Castle on Saturday 27th May for their sold-out concert with their Not In This Lifetime Tour, 25 years since they last played the legendary venue. Royal Blood, Mark Lanegan...