Commemorating over four decades of the group’s and Ian Curtis’ continuing influence, Peter Hook & The Light are coming to Belfast for a special show performing “Joy Division: A Celebration” on Saturday, November 12th 2022.

Playing both celebrated Joy Division albums “Unknown Pleasures” and “Closer” in full plus singles and B sides along with an opening set of New Order material, the concerts begin at Limerick’s Big Top Thurs 10th Nov ’22 with the second night coming at Dublin’s Olympia Theatre on Friday before the band wind up the trio of gigs Sat 12th Nov ’22, returning to The Limelight, Belfast.

These Joy Division album shows have become much less common for The Light as they move through their progression of touring the New Order albums in succession since 2012. Aside from some one-off gigs such as The Roxy in LA, Camden Roundhouse and Manchester Academy, this set of concerts is the first Irish shows to be announced for this set in many years.

In addition to coming over 40 years since Joy Division ended, these gigs also mark over a decade of concerts for The Light since they began at The Factory in Manchester in May 2010. That journey has seen them now perform eleven of both Hooky’s bands’ albums all round the world including numerous tours of North and South America, Australia, New Zealand and the Far East.

The influence of Joy Division and their music remains strong in popular culture, holding a sincere reverence. The albums are played sequentially in track order, respecting the inspiration and impact of the stunning debut album “Unknown Pleasures” and the immaculately produced second “Closer”.

In addition to the albums, the November 2022 Ireland dates will span the entirety of Joy Division’s rich but short career including early Warsaw material, tracks from the compilation LP “Still” to the final songs “Ceremony” and “In a Lonely Place” written by Joy Division which were to form New Order’s first single.

Tickets on sale Monday, July 05th at 10 am from www.ticketmaster.ie 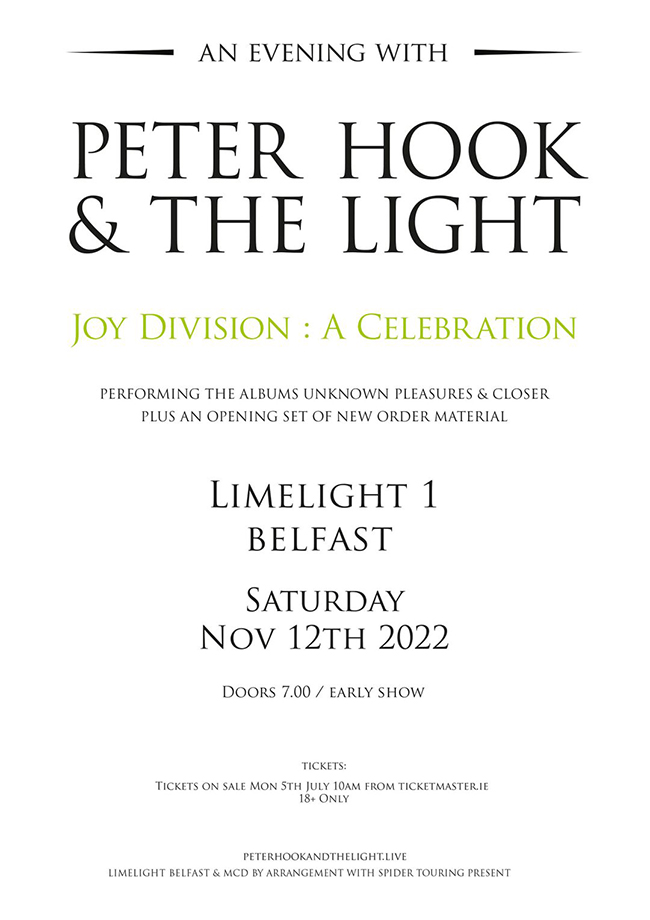 The country’s best-loved rockers Status Quo are following on from their triumphant Hyde Park ‘Radio 2 Live’ show and coming back to reclaim their position on the live circuit – with the ‘Backbone’ UK Winter Tour in 2020. Quo...

All tickets for U2’s eXPERIENCE + iNNOCENCE Tour Belfast date, as well as for their four Dublin shows, sold out this morning, with delighted fans taking to social media to express their excitement at seeing...