Mike Rosenberg, better known as Passenger, announces his new studio album Songs for the Drunk and Broken Hearted will be released on January 8, 2021, and today he shares the track that inspired the album’s title, “A Song for the Drunk and Broken Hearted,” along with an accompanying video. He’s also happy to announce that all physical packaging of CDs and Vinyl will be made of 100% recycled material, and one tree will be planted for every physical piece sold via the Passenger webstore thanks to a partnership with Ecologi and the Eden Project.

Passenger’s proposed year of busking, festivals and headline shows is postponed until 2021*. With an authentic and engaging live show that has won over scores of fans and critics around the globe and allowed him to headline some of the world’s most famous stages, he looks forward to returning to the road as soon as it’s safe for everyone. Until then, Rosenberg invites fans to an intimate evening at London’s famed Royal Albert Hall for an exclusive performance film that will be broadcast on January 10, 2021, to celebrate the album’s release. Everyone who pre-orders the album from the Passenger webstore receives priority access to the event.

The majority of Songs for the Drunk and Broken Hearted was written when Rosenberg was newly single. “Coming out of a break-up creates such a fragile window,” he reflects. “You’re incredibly vulnerable for a few months. You’re so used to the safety of being with somebody and suddenly you’re out in the world on your own. And you get pissed and probably make some bad decisions. In some ways, you make it worse for yourself. But it’s a heady moment, losing love and being drunk. And it’s universal. Everyone goes through it at some stage.”

The accompanying music video sees Passenger and his bandmates dressed as downhearted clowns playing to a room of the drunk and broken-hearted. “This video was so much fun to make,” Rosenberg says. “I’m a huge fan of ‘The Joker,’ and as the lyrics in the chorus of the song mention ‘jokers and ‘jesters,’ it felt like the perfect opportunity to dress up like a clown and freak everyone out. The idea of setting it in a really grim and depressing bar room environment really helps bring out the story within the song.”

Watch the video for “A Song for the Drunk and Broken Hearted” - BELOW:

Hailing from Brighton, England, Passenger is a multi-award winning, platinum-selling singer-songwriter. Although still known for his busking, he long ago made the journey from street corners to stadiums, thanks in part to supporting his good mate Ed Sheeran, and most notably with “Let Her Go,” which reached number 1 in 19 countries and is approaching three billion plays on YouTube. Yet ‘Let Her Go’ is just one song from a remarkable and prolific back catalogue, including 2016’s Young as the Morning, Old as the Sea, which topped the charts in the UK and beyond. The consistency of his output, coupled with his authenticity both on and off stage, has won Passenger a dedicated fanbase around the globe. 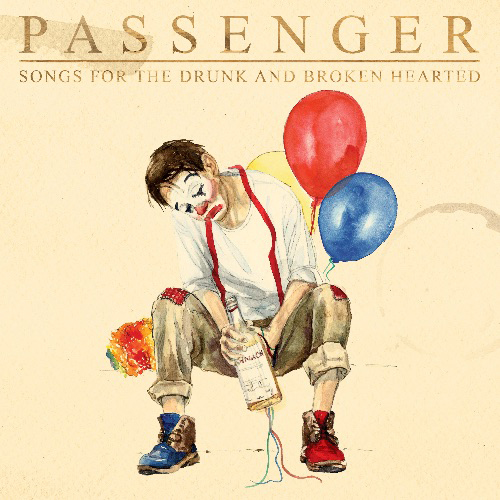 Passenger’s current album ‘Songs For The Drunk and Broken Hearted’ debuted at #2 when it was released in January, making it the second highest-charting set of his career to date and has accumulated over 25...

Following the release of his acclaimed new album Songs For The Drunk And Broken Hearted, which was sitting comfortably at number 2 in the UK Official Charts midweek earlier this week, Passenger (Mike Rosenberg) now...

Mike Rosenberg, better known as Passenger, releases his new studio album Songs for the Drunk and Broken Hearted on January 8, 2021. Hailing from Brighton, England, Passenger is a multi-award winning, platinum-selling singer-songwriter. Although still...