Paolo Nutini today announces details of a UK and European tour, which commences in Limerick on August 21st. It includes a London performance at the historic Alexandra Palace as well as two shows in his homeland of Scotland. News of the tour follows the recent announcement that his new album ‘Last Night In The Bittersweet’ will be released on July 1st.

Fans who pre-order ‘Last Night In The Bittersweet’ by 3 pm BST on Monday, May 23rd, will receive exclusive access to a pre-sale for tour tickets. The album pre-sale will open at 9 am BST, Tuesday 24th May, via Ticketmaster. The remaining tickets go on general sale HERE from 9 am BST on Wednesday, May 25th.

Last week Paolo released ‘Lose It’ and ‘Through The Echoes’ - the two songs provide a taste of what to expect from ‘Last Night In The Bittersweet’. Paolo’s fourth studio album is a 70-minute epic that spans the distance from classic rock to post-punk to hypnotic Krautrock, in the process proving its value as his deepest, most varied, most accomplished, and ultimately most rewarding set so far. Paolo is also confirmed to perform on Later…with Jools Holland, on BBC Two and BBC iPlayer on Saturday 11th June”. 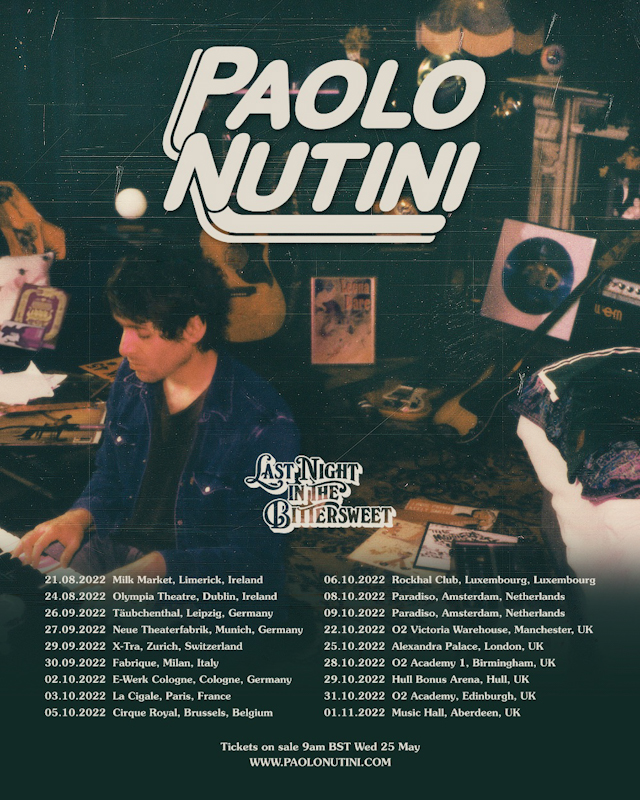 Paolo Nutini is set to release his new album and fourth studio set ‘Last Night In The Bittersweet’ on July 1st via Atlantic Records. He launched the album by sharing two new singles, ‘Lose It’...

Paolo Nutini builds anticipation towards the release of his new album and fourth studio set ‘Last Night In The Bittersweet’out next Friday, July 1st by sharing two new tracks ‘Acid Eyes’ and ‘Petrified in Love’. ...

Paolo Nutini announces a run of intimate UK live dates, which commences this Saturday at Sheffield’s Leadmill. He will then play four nights at London’s 100 Club next week and two shows at the Corran...