Thousands of venues and places of work worldwide were lit red alongside unique shafts of light, projections, art installations and outreach to government officials and media to raise awareness and drive change.

The We Make Events NI group ensured 80 venues and eight lighting beam locations placed Northern Ireland on the map. Across the country, sites including The Marketplace in Armagh, Belfast’s Grand Opera House & SSE Arena, the Riverside Theatre in Coleraine, Millennium Forum in Derry / Londonderry and The Atlantic Bar in Portrush turned red, stating the level of emergency.

As long as it’s deemed unsafe for large crowds to gather, the revenue stream for live event businesses on a global scale is non-existent. This sector remains unable to move forward in a financially viable way, something Northern Ireland’s live events community continues to fight.

A representative from the ICC / Waterfront & Ulster Halls who’s buildings were awash with red light said: “Every year, 250,000 patrons are welcomed at just two of Northern Ireland's most iconic venues. This leads to £20M in economic impact from incredible live entertainment and business events held here. These venues and our industry as a whole are crucial to the sustained economic development of Northern Ireland.”

In the latest Government aid announcement, the Chancellor stated that employers should bring staff back to work for at least 33% of their ‘normal’ hours. However, for the employers that have no current income, no consistent work and for an industry that has had seen almost zero revenue since March, paying any percentage of wages is simply not possible, leaving staff and freelancers with nothing. On top of this, The Executive in Northern Ireland have banned live music of any kind, resulting in the complete shut down of the sector, not even allowing socially distanced and COVID compliant events to take place. 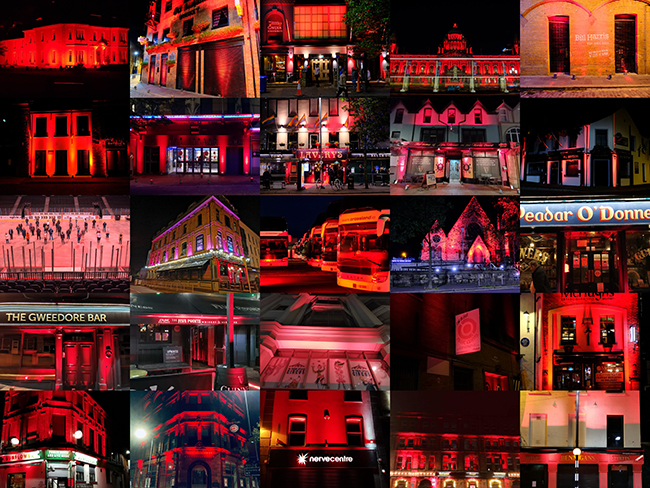 High profile acts like Mumford & Sons, Coldplay, Stereophonics and Annie Mac are just some of the high profile artists who have called for better government support, with the furlough scheme not applicable to the majority of the sector, viable businesses needing support and freelancers falling between the cracks. Dino Cafolla stated ‘with the shutdown on live music in NI and no clear roadmap for the events sector to return, Northern Ireland’s businesses, vendors, workers and venues need real, meaningful help if they are not allowed to operate. Government need to talk now about how the businesses will survive, how we can avoid a drain of talent, and how we can get back to work safely. The way to do this is to engage with the industry professionals"

The 2019 Business and Events Partnership report states that festivals, fairs and event shows generated £6bn while music events saw a £17.6bn total revenue spend for the UK economy. Without local support and political recognition, the local businesses here in NI - which are responsible for our own economic boost - will simply cease to exist, leaving 7,500 unemployed and the general public without arts, culture and live entertainment. 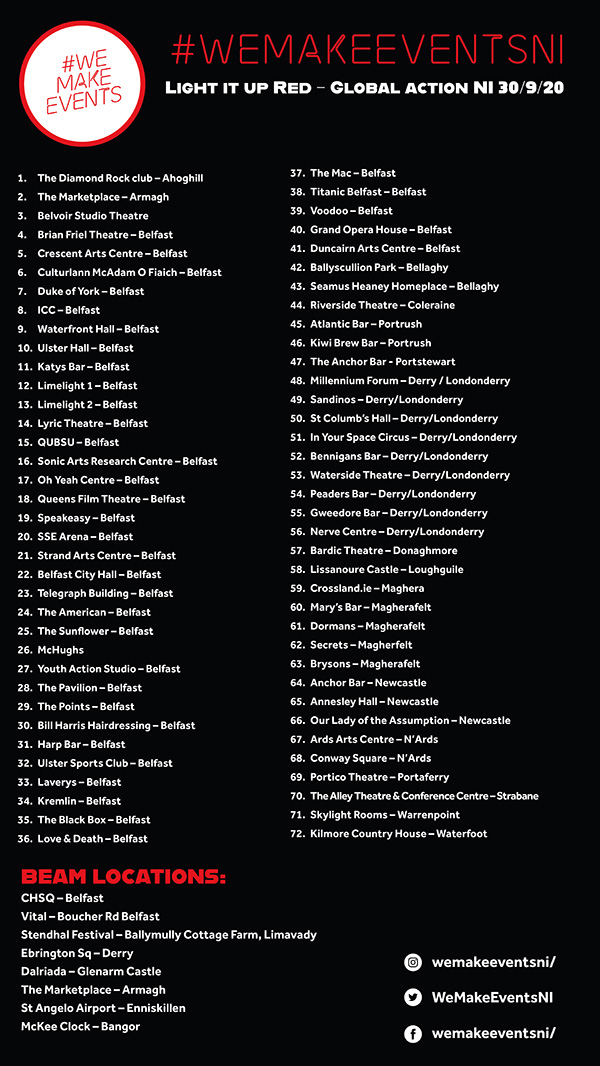 IN FOCUS// The Stranglers at Ulster Hall, Belfast, Northern Ireland

The Stranglers’ Back on the Tracks 19-date UK Tour kicked off in Belfast on 28th February at the Ulster Hall. Clair McAllister was on hand to take these fantastic live images. Check out more images...

Described by OK Magazine! as 'the breath of fresh air we all need right now' and QX Magazine as "an infectiously energetic, refreshingly cheerful Singer/Songwriter”, Conleth Kane recorded his debut album 'Proud - Live in...

Irish singer-songwriter Amy Montgomery releases her debut EP, Intangible, on November 20th. Amy hails from County Antrim, Northern Ireland and the first thing you notice, apart from her outlandish bohemian looks, is her raw and...