Released as a limited edition 12” pressed on teal coloured vinyl with new sleeve artwork by Gareth Halliday, it will feature three new remixes of tracks taken from the No.1 album, ‘Who Built The Moon?’. London-based French DJ/producer Nicolas Laugier, aka The Reflex, provides remixes of ‘She Taught Me How To Fly’ and ‘Keep On Reaching’, while British artist Richard Norris reworks ‘Black & White Sunshine’. The forthcoming release follows the huge success of last year’s 12” of ‘It’s A Beautiful World’, which was the biggest-selling vinyl single of 2018. 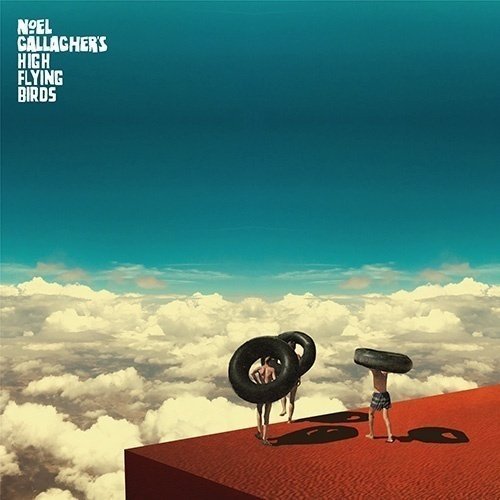 The full tracklisting for the Record Store Day exclusive vinyl is:

A1. ‘She Taught Me How To Fly’ (The Reflex Revision)

A2. ‘Keep On Reaching’ (The Reflex Revision)

Noel says: “I love Record Store Day. It gives us, the artists, a chance to put music out there that otherwise might never see the light of day. I love the fact that the items are very limited edition and I do utter the phrase ‘I’ll save that for Record Store Day’ a LOT.”

‘She Taught Me How To Fly’ was the third single to be taken from the album ‘Who Built The Moon?’, which also features the other tracks remixed on the EP. The album debuted in the UK at No.1, achieving gold certification in less than two weeks after its release – making it a hat-trick of No.1 albums for Noel Gallagher’s High Flying Birds. The Mercury-nominated ‘Who Built The Moon?’ was also a record-breaking 10th consecutive chart-topping studio album in the UK for Noel – no other artist has achieved such a feat.

Noel Gallagher’s High Flying Birds recently announced new UK tour dates in May with support from Gaz Coombes – with all shows now sold out. The 11-piece line-up will perform in more intimate venues in Edinburgh, Llandudno, Hull and, for the first time ever for Noel, The London Palladium. With Noel currently recording new material in studios in London and LA, the shows are a chance for fans to potentially hear the new material for the very first time.

The dates are followed by a host of headline festival appearances across the summer including a date at Manchester’s Heaton Park.  The live dates in full are:

Following the recent release of new single 'This Is The Place', today Noel Gallagher's High Flying Birds release the video for the track, directed by Dan Cadan and Jonathan Mowatt, who also directed the video...

THE AMORPHOUS ANDROGYNOUS return with Peter Hamill collaboration, ‘We Persuade Ourselves We Are Immortal’

The Amorphous Androgynous return with a 40-minute six-part epic rock odyssey Peter Hamill collaboration, ‘We Persuade Ourselves We Are Immortal’ out now on vinyl and CD here, available on all streaming services from 21st May...

Today Liam Gallagher shares his new festive single 'All You're Dreaming Of'. Liam co-wrote the song with Simon Aldred of Cherry Ghost with Andrew Wyatt producing. This is a timeless track and perfect for this...