M83, aka Anthony Gonzalez, announces the highly anticipated details of his forthcoming full-length album, JUNK, out 8th April on Naive.

Following the critically acclaimed silver album "Hurry Up, We’re Dreaming," featuring Grammy nominated single "Midnight City," and two triumphant years of world touring, Gonzalez - who serves as M83’s musical architect, songwriter, front man and primary vocalist - returns with an artistic evolution, explaining, “I want to show different sides of me on this album. I want to come back with something more intimate, yet somehow with…less me!” 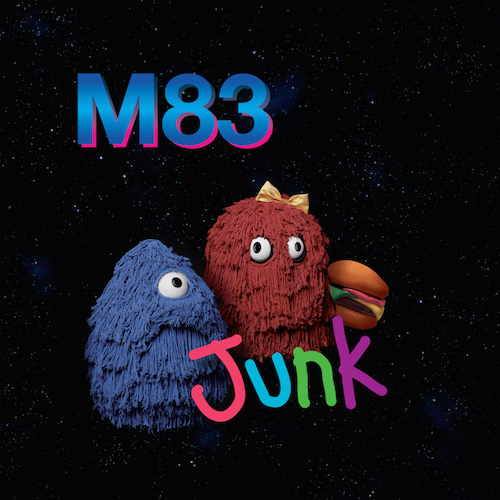 Feeling a renewed kinship with Gonzalez’s early musical inspirations like Tangerine Dream, Aphex Twin, and genre-expanding visionaries like Brian Wilson and Kevin Shields, Gonzalez both returns to his roots with this album, yet makes a logical leap forward. And while M83 albums has always combined genres in a nostalgic and provocative way – from shoegaze and ambient to synth-pop and ’90s alt-rock – for “JUNK", Gonzalez experiments adventurously with sounds and styles he’s never previously attempted in his music. “All my albums have layers of eclecticism to them, but with this album I wanted to take that even further,” he says.

Listen to album opener, “Do It, Try It,” which features a fractured and catchy mélange of old school house music, pianos, synthesized vocals, prog excess and pop art bubblegum hooks below.

On the album title “JUNK,” Gonzalez divulges, "Anything we create today is going to end up being space junk at one point anyway, and I find it really fascinating and scary at the same time - beautiful too in a way. I have this image of pieces of humanity floating in space, lost forever. It also means that nowadays everything goes so fast and everybody is kind of throwing away art in a certain manner. People will listen to an album for instance and just pick a track they like to put on a playlist. They're not going to take the time to listen to an album anymore because they have to jump on the next thing.”

M83 has also announced a North American tour and worldwide Festival dates including special performances at Latitude Festival in the UK, the renowned Coachella festival in Indio, CA, The Governor’s Ball in NYC, and Way Out West in Sweden. Full tour dates below.

M83, aka Anthony Gonzalez, has announced an initial series of North American tour dates including special performances at the renowned Coachella festival in Indio, CA and The Governor’s Ball in NYC. This summer will see...

It's rare that an album manages to entirely live up to its name. I've never been fully convinced by M83 as Saturdays = Youth lacked a punch and Hurry Up We're Dreaming suffered from the...

M83, the brainchild of musician Anthony Gonzalez, today shares a new video for “My Tears Are Becoming A Sea”. A standout track from M83’s celebrated 2011 double album Hurry Up, We’re Dreaming, the video for...