“This song is very personal to me, writing it was like a therapy session…I wrote it as a way of dealing with a relationship that I had with somebody who struggled very severely with mental health issues. It’s as straightforward as it sounds in the lyrics. It’s all coming from the heart, it’s me trying to make sense of it with myself while also trying to move forward.”

After years of playing, performing, and paying her dues, Wilde is ready to unleash her first full album, carving her name into the alt-rock genre as one of it’s most exciting newcomers. ‘RUTHLESS’ features brand new JJ Wilde songs as well as some of her most beloved singles, including ‘The Rush’ which recently became her most successful single to date garnering over 3 million streams globally. ‘The Rush’ also topped Billboard’s Canada Rock Chart, sharing the top ten with modern rock legends like The Killers & The Black Keys.

Check out the video for ‘Funeral For A Lover’ - BELOW:

The new songs on ‘RUTHLESS’ mark an exciting next chapter in Wilde’s evolution from a fan-favourite underdog touring alongside Incubus, The Blue Stones and The Glorious Sons to one of rock’s most promising rising songwriters and performers.

‘Knees’ is a thrilling album opener, both a classic break-up kiss-off and a formative mission statement for ‘RUTHLESS’: “This album has been a long time coming and I am so excited to finally be able to share it. It started out as a writing trip to LA and over the course of my first year being signed, through many personal ups and downs, gains, losses, new experiences touring and travelling, I feel like this album perfectly represents the years of my life leading up this moment and all the changes that I have gone through, good and bad. Between struggling to pay bills working multiple dead-end jobs, toxic relationships beginning and ending, it's all in there. ‘RUTHLESS’ will give listeners a first and very personal look into my mind, heart, and everything in between.”

‘Cold Shoulder’ taps into the kind of 70s New York vibe that might be more familiar with ‘Some Girls’-era Rolling Stones; the track blends back-beat grooves with Wilde’s signature power-chord release in a way, unlike anything she’s done yet. ‘Breakfast In Bed’, a song Wilde was able to write and finish within hours of striking inspiration, is a giddy and empowering as the song’s namesake, with the kind of riff that recalls ‘00s New York rock ‘n’ roll. And album closer ‘Feelings’ finds Wilde in a more sombre mood - and it might be her most experimental and sonically adventurous song yet.

Sewing together an honesty that calls to mind Liz Phair, a swagger reminiscent of Bikini Kill, and a Courtney Love-esque snarl, JJ Wilde is not only paying respect to the heart and soul of rock music but fully chiselling her own place within the genre.

The album will be released via BMG/Black Box on all streaming services and is a brash declaration of artistry from a refreshing new voice in rock. ‘RUTHLESS’ is available here; 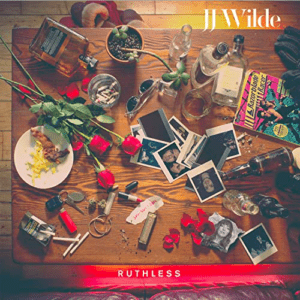 Funeral For A Lover