To walk in the footsteps of Oasis as they made Be Here Now, the fastest-selling album ever, requires a journey back in time. But where to start? Not in London’s legendary Abbey Road Studios, where recording sessions began in late September 1996. Nor on the Caribbean island of Mustique, the exclusive location for Noel Gallagher’s holiday earlier that year, where, at a villa owned by Mick Jagger, he and Oasis producer Owen Morris recorded demo versions of the songs that eventually formed the album – demos that are finally being released as part of a lavish new deluxe version of Be Here Now.

In fact, the story really begins four years earlier, before Oasis had made any records at all, at the Boardwalk club on Little Peter Street, Manchester. There, in a tiny rehearsal room one evening in 1992, Noel Gallagher taught his bandmates All Around The World, a song he had already earmarked for their third album, some 18 months before they would make their first.

“A lot of people at the time didn’t believe me when I said I’d written the first three albums before Definitely Maybe came out,” says Noel. “But I’d written All Around The World and I’d had the idea for D’You Know What I Mean?, before Rock’n’Roll Star. All Around The World was 11 minutes long then, and I remember playing it in one go and Bonehead had the look of a man who’d seen a ghost. Trying to convince the band who don’t have a manager, a record deal or any fans, that this song is gonna be the centrepiece of our third album – it takes some doing!”

When the time came to make that third album, of course, dreams of rock’n’roll stardom had become real. Hence Noel’s working holiday in the Caribbean. The erstwhile Inspiral Carpets roadie was now rubbing shoulders with rock’s super-elite. As he handed his passport to the immigration officer at Mustique’s small airport, he heard a voice whisper in his ear: “They’ll literally let anybody on this island these days…’”

“I turn round and it’s Nick Mason from Pink Floyd. Mick Jagger was playing cricket on the green. It’s so far removed from Burnage! In hindsight, the contrast of finishing off that album there, when you’ve done the other two in the Boardwalk in Manchester, in the rain, is quite telling.” 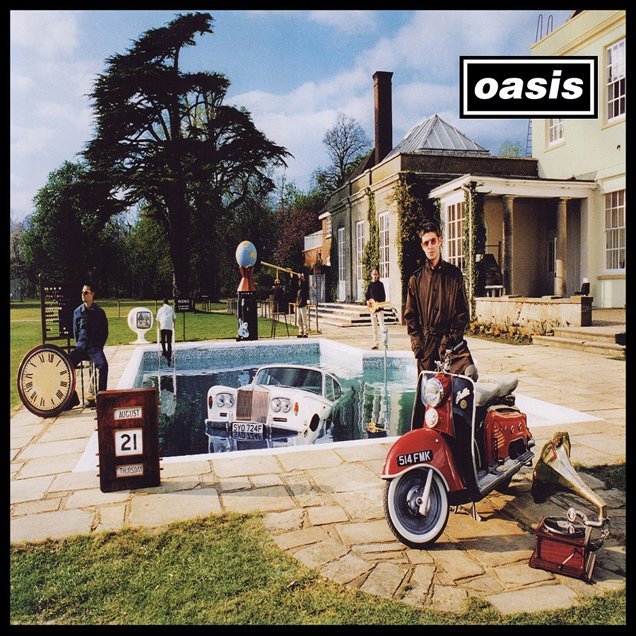 Inbetween the Mustique session and the start of recording Be Here Now at Abbey Road, on August 10-11 Oasis played two epochal shows at Knebworth House, to a combined audience of 250,000. An astounding 2.5 million people applied for tickets. Oasis had become the omnipresent avatar of British youth culture. With an estimated 4 per cent of UK households owning a copy of the band’s second album, (What’s The Story) Morning Glory?, the appetite for its follow-up was so intense that anything Oasis did or said was deemed newsworthy. Liam Gallagher walking out on his colleagues at Heathrow Airport on the eve of a US tour, two weeks after Knebworth, was splashed over the next morning’s front pages. When Noel quit the same tour two weeks later, camera crews from BBC, ITV and Sky News were awaiting his arrival. It was amid this overheated atmosphere, compounding the typically fractious climate within the band, that Oasis began the task of making arguably the most eagerly awaited record since the heyday of The Beatles and The Rolling Stones.

“They were crazy times,” says Noel. “A lot of drinking, and a lot of not thinking straight. Our management’s philosophy is to keep the band working at all costs because if they stop working it’ll fall apart. So it was exciting but exhausting as well. You’re the biggest band in the world, making this much anticipated new record, it was the birth of celebrity culture and what became known as Britpop had crossed over into the tabloids. I was constantly having a microphone shoved into my face. No way to make a record.”

With the press camped outside, inside Abbey Road Studios Oasis were doing what any sane person could have guessed they would be doing if given access to the hallowed space where The Beatles changed the course of music. A building that also happened to have its own bar…

“We were just getting pissed all the time,” says Noel. “In the corridors of Abbey Road, it’s very quiet. There’s guys in there making classical albums. You opened the door to our studio and it was like Animal House. Smoke billowing out, screaming… I think they got a little bit pissed off with us.”

With the Abbey Road sessions ill-tempered and unproductive, fleeing London’s media goldfish bowl for a residential studio in rural Surrey must have seemed like a good idea. Yet as Oasis decamped to Ridge Farm, the circus followed them. Immediately, feelings of isolation and paranoia began clouding their efforts, particularly when the local constabulary began taking an interest in the new neighbours. “I remember one night,” says Noel, “this police car, with its lights off, just ambling down the lane… That’s the only time I was genuinely thinking, ‘We’re all going to jail.’ Thankfully they didn’t come into the studio. We’d have had a lot of explaining to do, put it that way.”

Almost three months into the process, without any sign of a record emerging, Oasis returned to London and made themselves at home in Air, owned by The Beatles’ producer, George Martin. During the early months of 1997, recording sessions proceeded in comparatively stress-free fashion – albeit only compared to the preceding chaos. By this point, however, as recording ended and mixing began, the album’s sonic characteristics were becoming apparent: the songs, densely packed with multiple guitar overdubs, as typified by Stand By Me and My Big Mouth, were very long and very loud.

“We had two tape machines in Air,” says Noel. “You’ve got this huge desk, the size of Bradford, and then you’ve got a tape machine which couldn’t handle the number of tracks we had, so we had to get *another tape machine. It’s the only time I’ve ever seen that happen.” Producer Owen Morris regards the final mix of the album as “terrible”. Noel agrees. “It is shocking. All the things you shouldn’t do when you’re mixing a record, we were doing tenfold. Really, we shouldn’t have mixed it. We should have given it to somebody with a fresh perspective.”

Today Noel Gallagher considers Be Here Now “a missed opportunity”. Earlier this year, his long-harboured dissatisfaction with the final versions of the songs that began life so simply at the start of the decade in Manchester, and which came of age so promisingly in Mustique, prompted him to remix D’You Know What I Mean?. Dubbed ‘NG’s 2016 Rethink’, it’s released on the new Be Here Now deluxe edition. “I got the master tapes and honestly I was staggered at the amount of nonsense,” says Noel. “When we separated a hundred guitars, all doing the same thing, and got the key elements and did the remix, it sounds amazing! You can actually hear the strings and the bass guitar, you can actually hear everything. And the original mix is kind of *skrrrgggghhhh! The guy I was with said, ‘Why does it sound like that? I was like, ‘I can only tell you that on the night, it sounded fucking amazing!’”

The remixed D’You Know What I Mean? offers a tantalising glimpse of what might have been, had clearer heads prevailed in 1997. Ultimately, however, Be Here Now isn’t about clarity. It enjoys legendary status among Oasis fans, many of them musicians, precisely because of its unrepentant excess, its supersize swagger, its sheer preposterousness. “I sign thousands of these a week,” says Noel, holding a copy. “I sat up with Marilyn Manson one night and he went on about that record for longer than the record lasts, and that’s 72 minutes. He was saying it’s such a big influence on him. Kasabian, they fucking die for this album. That’s what made them be in a group. So who’s to say?”

Who indeed? Released on August 21, 1997, Be Here Now sold 400,000 copies in the UK that day alone. It has left an indelible mark on the history of British rock. Even its principal architect and harshest critic can’t argue with that.

“Coyley and Phil, my pals from Manchester, summed this album up best,” says Noel Gallagher. “They’ve always said: ‘It was just meant to be played once, on that day, high as a kite, preferably in the park, pissed – then never listened to again.’” He laughs. “Why didn’t I think of that?!”

Tenacious rock’n’roll four-piece TWISTED WHEEL will support Liam Gallagher across Europe this Winter. With the same Mancunian blood coursing through their veins, it’s perhaps no surprise the two act’s paths have crossed before. A loyal...

Following an audio recording of the Manchester City Champions Chant, the stage suddenly went black. The opening track "Fuckin' in the Bushes" from Oasis' first album of the twenty-first century: Standing on the Shoulder of...