Harmony Live, supported by Ards and North Down Borough Council, has unveiled their exciting line-up for this year’s festival, to take place in Holywood Rugby Grounds from 31 May – 2 June 2019. Topping the festival bill are iconic Welsh rockers Feeder, Alabama 3 (acoustic), New Yorkers Fun Lovin’ Criminals, Dublin icons Aslan as well as a reunion gig for The Adventures.

The opening night is a ‘throw back’ to the cream of 80s and 90s Irish talent. Dublin rockers Aslan, who won ‘Best Irish Band’ in the 2008 Meteor Awards, will perform anthems such as ‘Crazy World’ and frontman Christy Dignam promises an energetic, ‘crazy’ gig.

The Adventures, whose single ‘Broken Land’ was the most played song on BBC Radio 1 in 1988,  performed a sell-out reunion gig last year at The Belfast Empire, which was supposed to be a ‘one off’ and ‘last ever gig.’ Harmony Live, however, has convinced them to ‘play one more time’, so this could be the last opportunity to see this multi talented pop/rock Belfast outfit.

The Four of Us will get the festival off to a great start, performing hits from their debut, double platinum album ‘Songs for the Tempted’ such as ‘Mary’, ‘She Hits Me’ and ‘Drag My Bad Name Down’, as well as newly released material.

The second night welcomes National and International talent with 90s favourites Feeder as the headliners.  These Welsh rockers have sold over five million records over the past 22 years and look forward to bringing their anthemic rock music to County Down for the first time. Tracks like ‘Just The Way I’m Feeling’, ‘Buck Rogers’, ‘Feeling A Moment’ and ‘Lost and Found’ are just some of the hits promised on the night.

New Yorkers Fun Lovin’ Criminals, who are best known for their hit ‘Scooby Snacks’, will also take to the stage on the Saturday night, with DJ, broadcaster, author and producer ‘Huey Morgan’ fronting this cult rock/hip hop outfit.

Co Down Teenage YouTube sensations Dea Matrona will play support to Feeder and Fun Lovin’ Criminals and promise to “bring a lot of hair, smiles and crushed velvet flares to proceedings”(Giggin NI).  This all-girl band will bring an incredible amount of youthful energy and perform their own compositions as well as covers of class rock songs to get the party started.

Harmony Live continues to nurture and promote local singer songwriters and the finale night gives a platform for Ciaran Lavery and Villiers and the Villains to shine.  These critically acclaimed Northern Irish artists will play support to Alabama 3, whose hit single ‘Woke up This Morning’ appears as the theme tune for the HBO series The Sopranos. Local Holywood band, The Alexanders, will kick start the night and are honoured to be playing their biggest gig to date.

“Our festival committee has been working tirelessly over the past few months to put together a really strong line-up.  After last year’s sell out gigs for Bob Geldof and The Boomtown Rats, Toploader, Reef and Ryan McMullan, it was challenging to secure an even stronger offering. However, feedback from our local community, as well as positive comments from music aficionados and press, gives us the utmost confidence that we have nailed it! Harmony Live attracted over 10,000 people last year to Holywood which not only firmly puts Holywood and County Down on the tourism map but simultaneously benefits our local restaurants, bars, taxis etc who say this is the busiest weekend of the year -  thanks to the festival.”

“We are indebted to all of our sponsors, in particular Ards and North Down Borough Council, as without their financial support the festival just would not happen.  I am proud that this festival continues to showcase all that is great about my home town of Holywood and look forward to the eclectic, action packed festival weekend.” 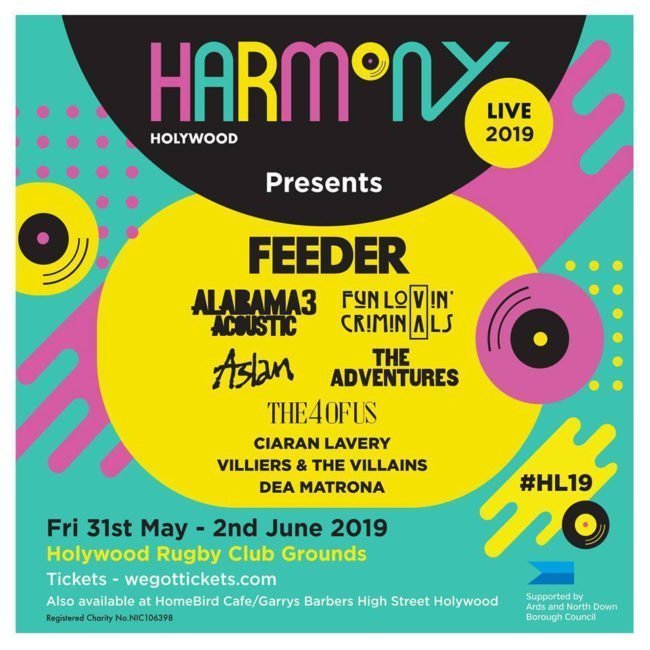 Aslan
The Adventures
The 4 Of Us

Villiers & The Villains
The Alexanders

Weekend Tickets for all three nights - £80

For further information on the festival check out www.harmonyholywood.co.uk

Alabama 3 are set to release brand new album entitled ‘Blues’ on Hostage Music to coincide with a UK and Irish Tour to celebrate the twentieth anniversary of the band’s formation. The eleven-date tour, which...

Feeder are in the midst of a resurgence, having scored consecutive Top 10 albums with 2016’s ‘All Bright Electric’ and the 2017 ‘Best Of’. That renewed power continues with their tenth studio album ‘Tallulah’, which will be released on August 9th via BELIEVE.  They have...

The seaside town of Bangor Co. Down is getting ready for the hottest month on its calendar when the seventh annual Open House Festival begins on Thursday 1st August. Throughout the 31 days of August,...