XS Noize has brought you Battle of the Bands: Rock Trump Cards, The Rock Bands Game: Come Together and Music Genius Playing Cards. Fun, entertaining, mesmerising and educational – they all are; however, rap and hip-hop artists were underrepresented in these games. This is where Rapper Stacks comes in, allowing music lovers to have card battles: one with “The Tens” rappers, the other with “The Nineties” rappers. Every detail, from the illustrations of the rappers themselves to the imagery representing the nineties and tens including ghetto blasters and iPhones, will lure you into a hip hop labyrinth.   For those with a healthy (or unhealthy) competitive streak, Rapper Stacks card games are for you as there “ain’t no draws in this shit, winner takes all and makes everyone else his bitch…”

Each card game has forty different cards featuring forty different hip hop artists (plus an additional card where you can create your own rapper). The game begins with the dealer dealing out the cards face down. Each player looks at their top card. The player to the dealers left begins by selecting one of the five categories: lyrical ability, bling, notoriety, impact and wild card information. The other players then read out the information from the same category from their cards. The player or “hustler” with the best or highest value wins and the winner of that round collects all the top cards from all the other players. The winner of that round then picks the next category from the card at the top of their pile and the battle continues.

The rules of the game are easy to learn and anyone regardless of their predilection for rap and hip hop will be able to play. With the rules written using street lingo, the game is more appealing, cheating is deterred and hip hop feels more authentic and relatable. For example, in “The Tens” rule book, it advises to prepare for the game by mixing “up that purple drink” and “get your favourite pimp cup at the ready”. In “The Nineties” “homies” are advised to “crack open a 40”.

What makes the Rapper Stacks exciting is not just which rappers feature, but which rappers come out on top for each of the five categories. Starting with “The Tens”, we would naturally expect to see Drake, Post Malone, A$AP Rocky, Nicki Minaj or Wiz Khalifa be triumphant in at least one of the five categories. None of them are. When it comes to both notoriety and impact; Kanye West wins. The best lyricist is Kendrick Lamar, Pharrell has the best Bling and the highest Wildcard fact score goes to Childish Gambino who began his career as a writer for the comedy show 30 Rock.

The architects of these games show a preference for nineties rappers who score more highly than “The Tens” counterparts across each of the five categories (although “The Nineties” also features a rapper who gets the lowest score out of all the eighty rappers across both card games). With lyrics, for “The Nineties”, the two joint third place rappers each score 95, whilst for “The Tens”; the third highest ranking lyricist scores 87. The greatest discrepancy surrounds bling with Jay Z coming third scoring 97 in “The Nineties” game and third place across “The Tens”, Quavo (Migos) scores just 83 in comparison. 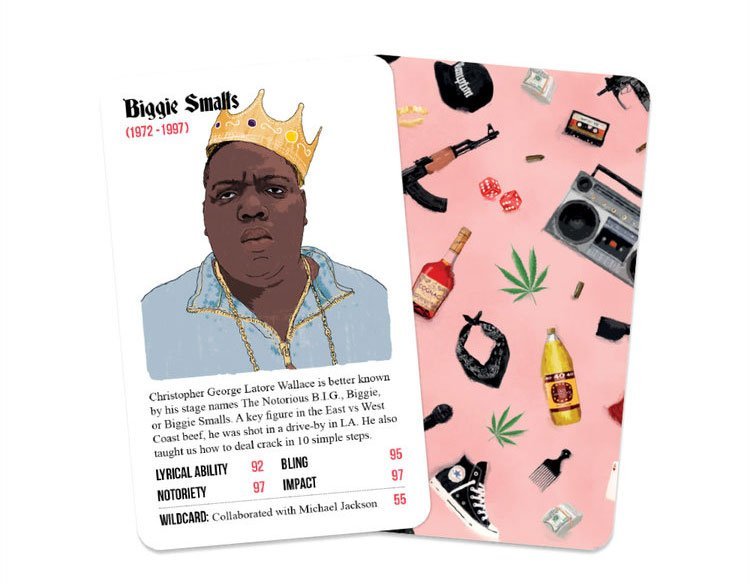 So which nineties rappers would you expect to see in the top three of each of the five categories? If it was a Family Fortunes question, we would expect Eminem, Snoop Dogg, Coolio, Fresh Prince and Vanilla Ice to reign supreme. They don’t. Vanilla Ice gets some of the worst and most humiliating scores. The greatest nineties lyricist is Big L (who was tragically shot and killed aged just 24). The most notorious was, less surprisingly, Tupac Shakur, who also suffered “death by gunfire”. The nineties King of Bling is Puff Daddy. Dr Dre had the biggest impact and the Wild Card fact goes to Ol’ Dirty Bastard, King of the AKA (also known as).

Which rapper released eight consecutive platinum and multi-platinum albums? Whose autobiography could qualify “as the most ridiculous book ever written”? Which of these rappers has the most impact earning them a higher score? The rapper with the highest score decides which player will be crowned “the realist motherfucka”. Just remember one thing before playing: “take out your pieces and take them to one side, we don’t want this shit to get out of hand”. Whether you win or not, you will learn a lot of things you didn’t know and will have an inclination to start listening to and build up your hip hop collection.

Rapper Stacks “The Nineties” and “The Tens” cards games and other cool merchandise including stickers, colouring books and face tattoos can be purchased via https://www.rapperstacks.com/