After nine sell-out UK and Irish tours, over 600,000 tickets sold, and countless television and live performances Diversity will be embarking one of their biggest UK tours to date in 2021, including a date at Waterfront Hall, Belfast and a matinee show at 3Arena in June 2021

Last year marked 10 years since Diversity took the nation by storm when they won the third series of Britain’s Got Talent. Over the past 10 years thanks to the overwhelming support of their fans and the British public they have continued to wow audiences around the world with their innovative live tours and performances. They celebrated this incredible achievement with a critically acclaimed sell-out 48 show UK tour, Born Ready.

This tour is set to be even bigger, and as Diversity promised their fans on the Born Ready tour, they will continue the legacy of Diversity and never let anyone tell them they cannot achieve something. To take them into the next decade of Diversity, Ashley has created a new show, ‘Connected’, which centres around the world of social media, the internet, and the digital era we now live in, but more importantly how this connects us all.

Creator and choreographer Ashley Banjo said of the forthcoming tour, “Every year that goes by, and every time we get to create a new touring show, I cannot believe we are still lucky enough to get to do this. But even after all this time, we are still growing, and this new decade and a new chapter for Diversity is sure to be something even more special than the last. I truly do believe that we are all connected in more ways than one and I cannot wait to bring this to life on stage.”

Diversity are also certified, TV superstars. Ashley Banjo recently returned to Britain’s Got Talent as a guest judge in place of Simon Cowell with Diversity giving an extremely powerful and emotive performance - watch it here.

Diversity continues to inspire the next generation of dancers with their online dance classes 20DV  and the Banjo brothers have just announced an exciting children’s book deal with Scholastic launching in 2021.

Diversity Irish Tour – tickets go on sale this Friday 16th October at 10 am. 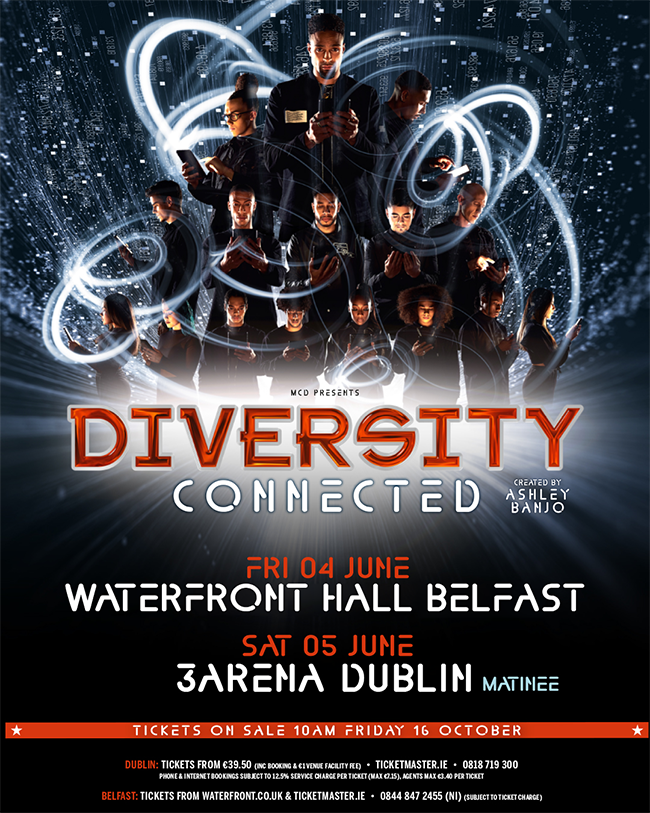 Bloc Party today announce they will play their seminal debut album Silent Alarm live and in full for the first time to audiences across Europe this autumn. The band will play a handful of special...

The Script have added a third and final Dublin show 5th March 2020 at 3Arena due to phenomenal demand. Tickets are on sale now. After 6 billion streams, 30 million single sales, 10.8 million album...

Florence + the Machine has today announced details of the UK & Ireland leg of the ‘High As Hope Tour’ including a show at 3Arena, Dublin on November 19th. A pre-sale for the 8-date run...