At XS Noize we have taken you on musical journeys one didn’t think was possible through books, particularly graphic novels. We have taken you on magical mystery tours via Yellow Submarine, explored the stories behind songs such as We're Going to be Friends and Outlaw Pete. We’ve also explored fiction books and biographies of both living and deceased music legends. Swan Song goes even further and offers readers “An anthology of (short) stories about music”. With over twenty short stories, Swan Song aims to express “the themes and feelings of music” and “real-world introspection”. Courtesy of the Cloudscape Comics Society, XS Noize is going to take you through the best of these short stories.

From its 12” by 12” size and with each story title contained inside a vinyl image; the connection to tangible and superb quality music is superb. Each story is based upon a song. We are told the name of each song and artist. There is also a Swan Song Official YouTube channel (where you can hear each of the songs that inspired the individual writers and illustrators). With the exception of two songs featuring Van Morrison and Annie Lennox; the majority of these songs are by lesser-known artists (even to music enthusiasts), traditional songs and from artists across the globe. Just this musical knowledge alone is blissful enlightenment; the stories will blow your mind.

Swan Song begins with The Mushroom Bard, a story about lead singer Lady Marigold and her small back up vocalist mushroom friend, Chicory. She enters mushroom land despite not being prohibited to do so (on account of not being a mushroom) and encounters the Mushroom King. Our Lady Marigold finds that she has much to learn musically from the King and one will be surprised how they can be musically captivated by a fairy-tale labyrinth without the need for medicinal inspiration. The next story, called, Tegan and Sara and Me is pure genius because it intellectually tells the story as to why the duo Tegan and Sara is author James Brandi’s favourite band. How many people try to do this and come across as vain or forget they are selling their band to someone else other than themselves? This is an extremely difficult task for someone to do and Brandi passes with flying colours. 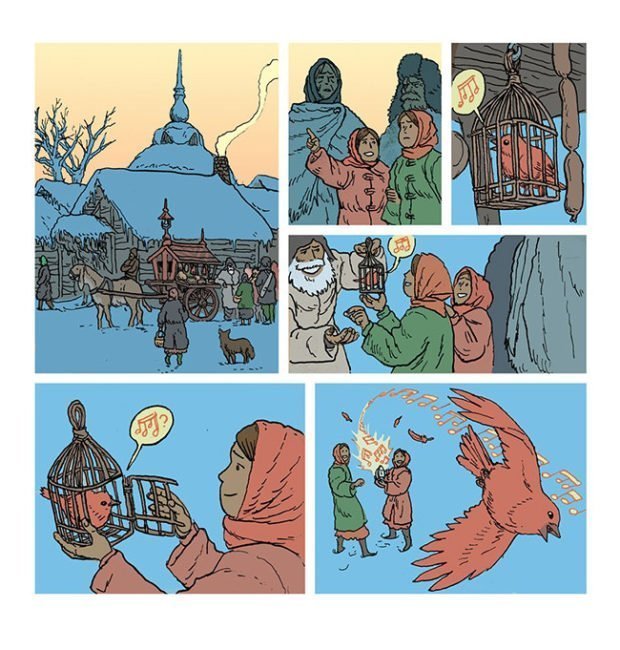 Shaman Hop is an unassuming story with Marvel/Sci-Fu style illustrations. Shaman Hop begins amidst a rap battle where the champion Phantasma is defending his title against a challenger that uses Buddhist teachings in his rhymes instead of insults. One thing this does that 8 Mile doesn’t, is that supernatural beings are called upon during the rap battle. The challenger proves his worth by showing empathy for the defending champion and his tough life on the streets. The challenger comes not as an invader, but as a healer to help Phantasma deal with his anger and emotions. Despite the conciseness of this story, it feels genuine and one is convinced that Phantasma learns to appreciate his challengers’ viewpoint within a realistic timeframe.

There are two stories which are mute, devoid of words. The artwork alone expresses the messages in the music. The Song Writer shows how one can achieve global fame by recording and uploading your own content from your own bedroom. Dream is Destiny shows through soothing acrylic paintings how in nature we can all get blissfully lost in our solitude and our personal head music. One also finds inspiring quotes throughout the stories. In With My Hand on Your Headset in India during the days of the British Empire, the words “you play and my feet finds your music” shows how music can help people find themselves and each other.

One of the best short stories left to last is called Swan Song. Written by Jeffrey Ellis, the man behind this compilation and the Cloudscape Comics Society; we are introduced to a band called Gastown Riot. They finally get to play as a headliner at The Jelly Fish Lounge, a venue they love where many artists they admire have played before, but sadly after their performance; The Jelly Fish Lounge is to close down and make way for a new development. Anyone who remembers the Astoria in Tottenham Court Road or The 12 Bar Clubs, firstly in Denmark Street and then Holloway Road in London will empathise with this situation. 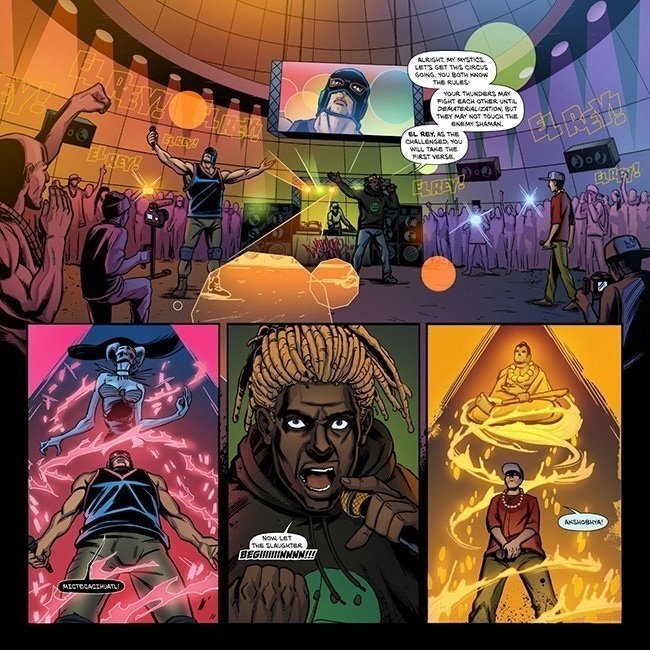 As well as genuine tearjerkers, there are educational stories such as Your Brain On Music, dystopian universes where music is suppressed such as Mothers Milk, stories where music bring people together such as Pier Music and stories where music is a superhero and saves the day such as Radioactive. There are also stories which involve pirates, the British prime minister, other planets, sea monsters, fairies, dragons, Kings and mock mermaids. The spectrum of the genres through the forum of music is mesmerising and will positively astound and inspire. For the love of music, creativity and motivation; this collection of stories by Swan Song by the Cloudscape Comics Society is an essential read for anyone galvanised by music.

Get your copy of Swan Song via https://www.cloudscapecomics.com/product/swan-song-sc/