It is well known that Jean-Michel Basquiat aka SAMO was a renowned neo-expressionist artist who gifted the world with numerous “provocative” works defining the New York art scene of the late ‘70s and early ‘80s. “Basquiat” is rightly classified by publisher Self Made Hero as belonging to their “Art Masters” collection along with novels about Andy Warhol and Pablo Picasso. However “Basquiat” is just as much a music-related graphic novel. After all, amongst other things, Basquiat founded experimental noise (jazz) band, Gray. Through this uniquely constructed graphic novel by Voloj and Mosdal, XS Noize will explore Basquiat’s’ influence as both a musician and on the music scene with fabulous “pictures based on true events”.

Like so many great musicians, including, but not limited to Robert Johnson and Kurt Cobain (both who have had graphic novels written about them and reviewed by XS Noize); SAMO died aged just twenty-seven years old. The poignancy of the age he died and how he died is presented in a haunting and alarming nature; something seldom is done when depicting the lives of other notorious individuals. The writers unapologetically show the tragic, desolate and undignified effects of drug abuse and the destructive destination point drug abuse took Basquiat to.

Basquiat the artist and musician are both dealt with and celebrated separately. The lesser-known accomplishments of Jean-Michel as a musician, influence on and interactions with musicians are addressed. He produced a rap single called “Beat Bop” which featured artists Rammellzee and K-Rob. Like Warhol, Basquiat also worked with David Bowie. SAMO, with his experimental noise band, Gray, played in notorious venues including The Mudd Club where he perfected the saxophone with filmmakers Michael Holman and Shannon Dawson and actor Vincent Gallo. Jean-Michel’s relationship with Debbie Harry from Blondie is well documented. He made a film with her (and other musicians including Eszter Balint) called Downtown 81 (then renamed New York Beat) that was never released in his lifetime. SAMO would also feature in Blondie’s music video Rapture which has received over nineteen million YouTube hits to date.

Music was always with Basquiat from his middle class but difficult childhood. He grew up listening to his fathers’ jazz collection which included Sonny Robbins and Porky Bess. Voloj and Mosdal emphasise SAMO’s love of music often by depicting him carrying around an old school ghetto blaster or listening to a Walkman. His brief relationship with Madonna is used to imply his infidelity whilst in a “more permanent” relationship with Suzanne Mallouk. Following his split with Mallouk “in 1983, Basquiat developed a taste for heroin that would eventually prove disastrous”. Other musicians including the Talking Heads and hip hop and electro funk ensemble Soulsonic Force led by Afrika Bambaataa are also referenced. 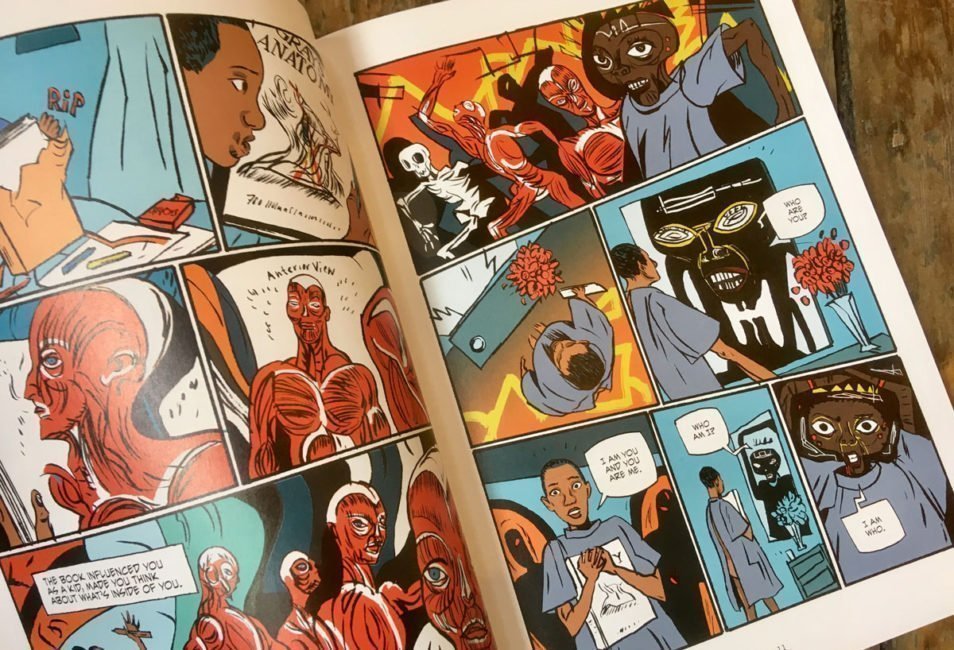 SAMO the artist came to life when as a child his parents gifted him a book of Gray’s Anatomy following a car accident whilst his fathers’ jazz records moulded the musician. Both Basquiat as a musician and (in more detail) an artist are imaginatively and deftly depicted, such as Basquiat’s relationships with Andy Warhol and Annina Nosei (his first art dealer) and his discomfort with being labelled as a “graffiti artist” as opposed to an “artist” is captured in an emotional and captivating manner, questioning society’s traditional approaches to “minority” artists like Jean-Michel.

What “Basquiat” does best, making it a unique and an emotive rollercoaster, is not its efforts at being an art related graphic novel or music related graphic novel, but how it explores Basquiat’s less glorious aspects where drug addiction affects one's mental health to a point that they deprive themselves and others the fruits of their own talents and love, resulting in them being isolated, lonely and with an infinite amount of unutilised potential they are unable to share and use for the greater good. These images captured in “Basquiat” along with “Basquiat” as a graphic novel will remain with you for a long time.

novelist REINHARD KLEIST is coming to London to promote his latest book 'Nick Cave & The Bad Seeds: An Art Book'