Ariel Pink announces the second instalment of Ariel Pink Archives, comprised of The Doldrums, Worn Copy and House Arrest out on 24 April on Mexican Summer.

Representing Ariel Pink’s most classic recordings as Ariel Pink’s Haunted Graffiti, the name used for his one-man recording venture between 1999–2004, each release has been restored from the original cassette masters, which have been retransferred and remastered from single-track sources. The first volume of Ariel Archives was released late last year and featured new editions of Loverboy and Underground, plus the long-awaited follow up volume of rare and unheard tracks titled Oddities Sodomies Vol. 2. The Doldrums and House Arrest will be presented on double LPs for the first time ever.

Ariel Pink’s historic run of material as Ariel Pink’s Haunted Graffiti unfolded in Los Angeles while Ariel was in his early twenties. Born Ariel Marcus Rosenberg in 1978, and raised in the Beverly Glen neighbourhood of Beverly Hills, Ariel went to Beverly Hills High School and then UC Santa Cruz for a year before transferring to CalArts, a reputable art school in Valencia just north of Los Angeles. Ariel departed CalArts early, however, to concentrate on music: he presented his early masterpiece The Doldrums as a senior thesis project and then left without a degree. Following The Doldrums, and its rudimentary predecessor Underground, Ariel Pink released a half-dozen more albums that culminated in Worn Copy, the last album before Arie’s five-year hiatus from releasing new music.

Ariel Archives makes an effort to reckon with the remarkable volume of outstanding music Ariel Pink made during this time. Rapidly evolving from crude proto-punk experiments to an adventurous home-recording aesthetic that explored a wide continuum of pop music, Ariel Pink developed a sound and image that would prove highly inventive and hugely influential.

Oddly, albums such as The Doldrums, Worn Copy and House Arrest were not widely embraced initially, though their inventiveness and strange beauty was usually recognized by reviewers, if not begrudgingly. Critical opinion was divided: Ariel Pink was either a self-indulgent “weirdo” or a pop music genius.

Releases in the Ariel Archives series will be expanded to contain much of the original material left off prior reissues that were made available in the mid-2000s and are now out of print. Expect further releases from Ariel Pink’s wondrous canon throughout 2020.

To celebrate the release of this second instalment, on Saturday 25th April there will be a launch party/pop up at World of Echo in London. A retrospective gathering from the vaults of Ariel Pink’s Haunted Graffiti, with a DJ set by Tim Burgess, visuals and merch – expect the weird and wondrous to meet. 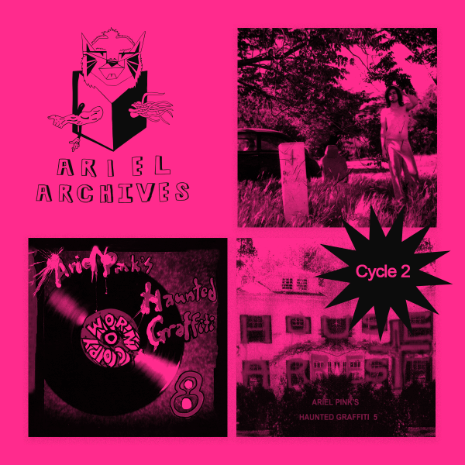 Today Ariel Pink releases a new video for Dedicated to Bobby Jameson single, “Time to Live.” The clip was directed by Ukranian art collective, Gorsad. The three-piece is revered for their raw, striking imagery exploring...