From its beginnings in 2007, Record Store Day has grown into an international celebration of music culture, with the great and good of indie, rock, pop, electronica and more all involved in the annual event. So it makes sense that a legendary UK songwriter would use this platform to raise awareness for two worthy causes via a new single.

Tom Hingley shot to fame as lead singer of revered Manchester sixties keyboard-led heroes Inspiral Carpets, before turning his attention to a solo career that began with 2000’s Keep Britain Tidy, and has subsequently involved much-lauded releases such as Thames Valley Delta Blues (2009) and Paper (2013). Add to this his work with The Lovers - including two LPs, an EP and a single - and it’s fair to say few can match his oeuvre for variety.

Refusing to stand still for long, he’s back under the acclaimed Tom Hingley Band guise, plugged in via electric guitars for the first time in years, and ready to unveil a brand new 7” in the shape of Beggar’s Hand, and its B-side, Toy. Alongside his comrades in arms - Ste Pearce (Dirty Saint), and Malcolm Law (Silent Partners) - the trio are again on a punk, rock ‘n’ roll and soul tip, veering from Bowie’s Tin Machine era to The Jimi Hendrix Experience read through the eyes of Frank Spencer. Or something like that.

Beggar’s Hand will be unveiled on Record Store Day 2016- Saturday 16th April- and will see proceeds from records sold in Liverpool and Manchester given to two charities. The recipients are Liverpool community initiative, Hope Fest, and the Manchester-based Lifeshare. Both are concerned with homelessness, providing much-needed support, signposting, food and emergency items for rough sleepers, with the North West having seen an exponential rise in service users over the last five years. Causes deserving of such talent, to say the least. These charities tie in with the polemic of the single, and accompanying stunning video, directed by Paul Mortlock. 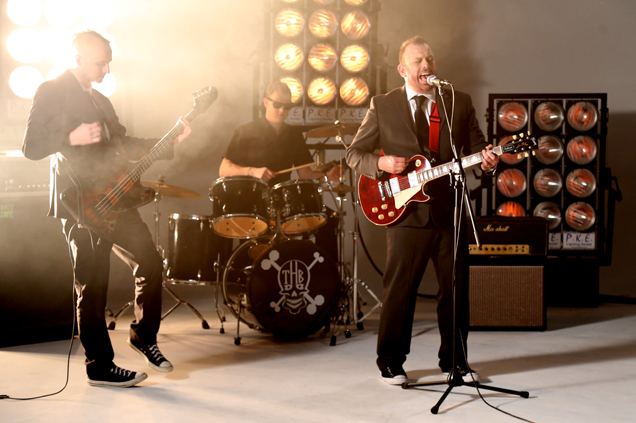 “We're really proud to be part of record store day. I had a career with the Inspiral Carpets selling vinyl and CDs. With the advent of downloading and streaming it's nice to be a butterfly once again, and fly the vinyl format for one day, transforming from a grub into the beautiful Red Admiral of a physical artefact,” said Hingley.

“Hope Fest is honoured to be working alongside the Tom Hingley Band to raise funds and awareness for the homeless. We run an annual music festival where the ticket fees are either food or clothing, which goes directly to the homeless, with funds allocated to help towards running training programmes for people who have experienced homelessness,” said Anna Grace Henney, Founding Director of Hope Fest.

“The training programmes offer work experience at the festival and the transferable skills attendees gain can help toward finding employment and shelter, as well as breaking the cycle of homelessness. We also have a street team in operation in Liverpool, providing hot drinks, soup and warm clothing as well as advice to those in need.”

“Lifeshare works to meet the needs of homeless and vulnerable people in Manchester and Salford offering support, advice and practical help including food parcels, weekend breakfasts, clothes and toiletries as well as an open-house Christmas project. Tom has already supported the charity by playing at our Christmas Project last year. We are over the moon that he is releasing a single for Record Store Day and donating profits to us which will enable Lifeshare to continue working towards preventing the cycle of homelessness, promoting health and reducing harm,” said Lifeshare Team Leader Judith Vickers.

Back in the late 1960s apart from London, there were no other professional recording facilities at the time. Strawberry Studios began its incarnation in 1967 in Stockport, Manchester when local man Peter Tattersall (who had...

INSPIRAL CARPETS have announced details of two new reissues, both available on vinyl for the first time since their initial release. Revenge of the Goldfish and Devil Hopping will be released on Mute / BMG...