The Record Store Day release marks the 40th anniversary of ‘11 O’Clock Tick Tock’ and includes the full-length version of the track, as well as the original 7” B-side ‘Touch’; plus two previously unreleased live recordings - ‘Touch’ and ‘Twilight’ - from the band’s memorable show at the Marquee in London in September 1980.

‘11 O’Clock Tick Tock’ was produced by Martin Hannett and recorded in the spring of 1980 at Dublin’s Windmill Lane Studios. Released in May that year, the song was U2’s first single on Island Records. 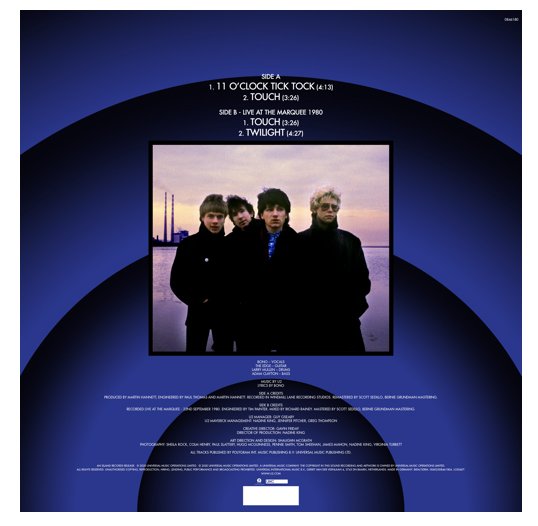 U2’s 14th studio album, Songs of Experience (Interscope), has now become the band’s eighth album to hit #1 on the Billboard 200, making U2 the sole group to score #1 albums across four decades: The...

U2 confirm dates for six Irish shows in November

The Irish Times reports, U2 will play six Irish shows in November, with two concerts in Belfast and four in Dublin as part of their Innocence and Experience tour. The band will be performing in...

Island Records have announced the release of Zooropa on blue vinyl as part of National Album Day in the UK. Available in HMV stores across the UK from 13th October and also on U2.com. Zooropa is...