Steven Wilson has announced details of a completely unique special edition of his forthcoming sixth album, THE FUTURE BITES. ULTRA DELUXE MUSIC PRODUCT ON OBSOLETE MEDIA will retail for £10,000. All proceeds will go directly to the Music Venue Trust to help save grassroots gig venues in the UK.

Never done before and never to be repeated, it is a hugely enhanced version of his already brilliant new record that provides an insight into Steven’s working process. The ultimate aspirational product, it proves that if music is an ongoing conversation between artist and fan, this 1 of 1 edition of THE FUTURE BITES is less mass email and more like the closest thing you’ll get to an in-depth discussion with the artist over an intimate dinner date for two.

Inside ULTRA DELUXE MUSIC PRODUCT ON OBSOLETE MEDIA bespoke box are the contents of the already announced deluxe box set of the album alongside music unheard anywhere else, conceptual artwork, hand-written lyrics and items of personal ephemera from Steven Wilson’s archive. It includes: 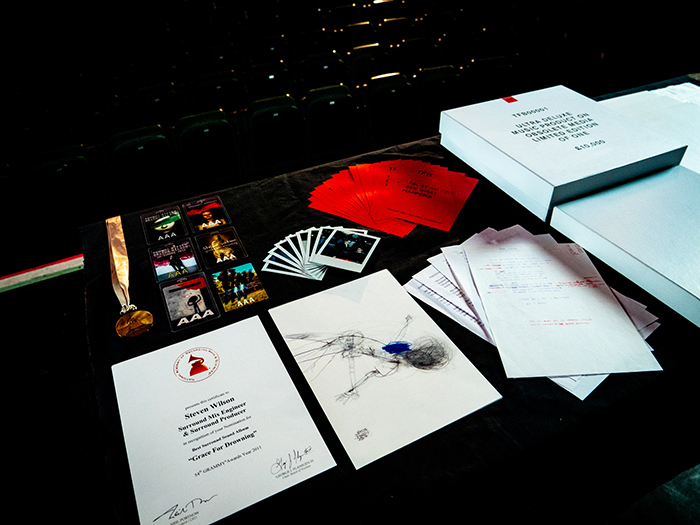 Steven Wilson: “This edition of THE FUTURE BITES takes the whole notion of deluxe limited editions to its logical and fairly extreme conclusion, as the ultimate limited edition will obviously end up being just one copy. In many ways, this edition is more analogous with the world of art than with those of music or luxury branding. Only one person can own an actual painting with the artist’s brush strokes on it. There is no variance, only the one original. With regards to the contents of the 1 of 1 edition, it’s the purchaser’s choice as whether they decide to share what they’ve bought or keep it to themselves. Do they want to exhibit ‘the painting’, or put it on display at home? If it was me, I’d probably keep it private but I’ll leave it entirely up to them as what they do with the contents of their purchase.”

All proceeds from the sale of ULTRA DELUXE MUSIC PRODUCT ON OBSOLETE MEDIA go directly to the Music Venue Trust to help save grassroots venues across the UK that have been affected by COVID 19. For Steven, those are the kinds of venues he spent his formative years playing.

“The first Porcupine Tree show as in The Nag’s Head in High Wycombe and, for the first ten years the band played live shows, we gigged solely in that subterranean world of clubs and pub venues. As someone who doesn’t really exist within the mainstream, this is the stuff that really affects me. I wouldn’t be sat here with any sort of career in the music industry if it were’t for those venues and - just as importantly - the people who make them work night after night. The loss of venues in this country feels like a big part of my history dying. If you try to imagine the world without live music, you know immediately it would be a terrible place. Music is a connector, it’s an inspiration and it’s a healer for so many people. It’s essential we work now to save these places for future generations of bands and fans.”

Beverley Whitrick, Strategic Director, Music Venue Trust adds, “Artists and grassroots music venues are intrinsically linked and MVT has been delighted by the many and varied ways in which artists have responded to our calls for support to #SaveOurVenues. Steven's project is thought-provoking and unique. We are grateful for being involved.”

A new track from THE FUTURE BITES is online everywhere now. 12 THINGS I FORGOT is a confessional; admissions of neglect mapped out over a piece of soaring guitar music so gloriously uplifting it threatens to leave our stratosphere and keep going. 12 THINGS I FORGOT is the fourth track taken from the album, following PERSONAL SHOPPER, EMINENT SLEAZE and KING GHOST. It is available online everywhere now.

All formats of THE FUTURE BITES will be released on January 29th 2021.

Check out this weeks 'Vinyl Five for Monday 02/03/2015', The essential vinyl you should own this week, carefully selected by Kenny Murdock from Belfast's best vinyl record store 'Sick Records Belfast'. About 'Sick Records, Belfast'...

There isn’t much to say about 2021 that hasn’t already been said somewhere - it was chaotic, bizarre and unprecedented across all walks of life, and music in all its forms was hit hard.  We...