Ivor Novello winning, Glastonbury headliner and current number 1 charting artist with his single, ‘Vossi Bop’ Stormzy will play his largest Belfast headline show to date at Belsonic on Thursday 20th June 2019. Eighteen months since the release of his debut album, Stormzy can look back on a period in which his career and his life have been transformed. He was already soaring before Gang Signs and Prayer hit the airwaves and the streaming services, but the stellar success of that LP – as its name suggests, a vivid and thrilling journey through soul, gospel and grime – elevated him to an entirely new level of fame. The boy from Croydon, born to Ghanaian parents, is now a chart-topping artist with awards galore: one Ivor Novello, two Brits, and six MOBO Awards. He will be joined on the night by UK Rap artist Fredo.

There’s one theme to which Stormzy keeps returning: that of authenticity, which will be a guiding theme of his new album. “If you’re scared of your truth”, he explains, “that’s when people don’t know where you’re coming from. And I’m not scared of my truth, at all.” He places his fist firmly into his palm for emphasis. “I think that’s one thing with me, for the rest of my career. From GSAP, to whatever album’s gonna be my last one, the bottom line will be that: he was a bad boy. Not in the sense of being streetwise, but that he was true to himself and he was unapologetic.”

Stormzy’s rare blend of swagger, soulfulness and storytelling are reminiscent in several ways of Jay-Z, and so it is unsurprising to hear that he has learned much from the Brooklyn-born legend. “He taught me a lesson for the rest of my musical career, that I will never forget”, he recalls. “See with 4:44, he’s past the age of prime rapper, everyone from his era’s gone, he’s running round with all these new kids – not even the new kids, the new new kids…when I heard about (4:44), I’m not gonna lie, I thought: how is Jay-Z gonna drop an album today? And I’m a Jigga fan, but I was like ‘what do you have to say?’. And all he did was talk from his point of of view. That’s all he could do. He didn’t try and act like, ‘yeah, I’m in the club with Lil’ Pump, yeah, I’m still trapping on the block’”. That’s what I took from it. All he could talk about was his beef with the owner of Spotify. All he could talk about was his relationship with Beyonce, with his child, with his mum…kicking knowledge from that space of being a billionaire…you can’t knock it, because it’s the truth. And that’s why that album resonated.”

From the outset, Stormzy has always seemed more than a mere MC, or even a musician; witness the short film he starred to promote Gang Signs and Prayer, or his role in the 2016 film Brotherhood. His reverence for the written word has also found expression in the creation of Merky Books, the new imprint he has launched in collaboration with Penguin Random House UK. For Stormzy, it was a natural step. “I’m a lover of literature”, he says of his new venture. A keen fan of Malorie Blackman growing up, and now of the poet Yrsa Daley-Ward, he saw the need to express this passion; and, in the process, and to create opportunities for writers from his background.

Whilst he looks to elevate those around him, Stormzy has one eye firmly fixed on international stardom – yet the speed of his ascendancy has sometimes startled him. “My first show abroad was in Iceland, in 2015”, he recalls. “It was mad…I remember I had no tour manager. Walking through the crowd (to the stage), people are like ‘Stormzy! Oh shit! Man’s walking through, and people are going nuts!” A main reason for the surge in his popularity are his thrillingly kinetic live performances, which he conducts with all the passion and vigour of a footballer in the knockout stages of the World Cup. One moment, he’s crouched low in one corner of the stage, readying himself for an intimate confession; the next, he’s springing up and across, as if desperate to pace each patch of the stage. “My body and my mind won’t allow me to stay in one place”, he reveals, smiling. “My brain is saying, “don’t stop moving. You’re not allowed to stop moving. Keep up the energy. You’ve got to keep going – if you stop, they (the crowd) stop…And it pays off.”

It does indeed, with his shows even drawing the praise of one of the world’s most famous frontmen. “I did Glastonbury”, he says, “and I’ll never forget; Chris Martin came up to me afterwards, and he said one thing that he was so surprised by – and I saw it in him, you know when someone’s so genuine – he was like, that’s phenomenal. What he was so impressed by was that I kept the crowd captivated the whole time. ‘We didn’t take our eyes off you’ he said. ‘No-one took their eyes off you.’”

And so, with all eyes on Stormzy, he puts the finishing touches on his second full-length record: yet he seems to be wearing the pressure as lightly as a pair of his much-loved adidas. Having sold out Brixton Academy three times, and toured through dozens of countries, he is already supremely unfazed by the thought of playing the UK’s biggest venue. “I’m going to play Wembley Stadium”, he says. “One hundred percent. I don’t even doubt it.” The key to his confidence is simple. “I feel like I’ve fully found the code for music”, he says, “which is truth. It’s like, if I hear the riddim and I love it, that’s my truth.” A perfect example of this, he says, is Prince’s Purple Rain. “I don’t know much of his work, to be honest, but you know when he goes ‘I don’t want to be your weekend lover’? You see the way he’s singing that? That’s such a truth that I believe it.” With Stormzy apparently having found his winning formula, the watching world should be excited. “Speak your truth”, he shrugs. “That’s a foolproof plan.” 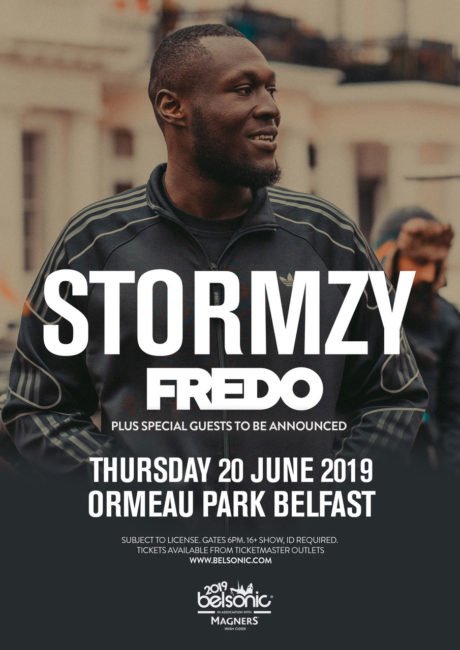 UK indie pop band Superorganism are pleased to announce a headline Belfast show at The Limelight 1 on Wednesday 17th October 2018. The band has been on a runaway train of success following their internet […]

It’s a cold November’s night with the rain beating down and the wind ready to cut you in two, but with one of the hottest act’s of 2019 about to take the stage in front […]