The founding members of MASK first met in 2004 – when the band should have been formed – but never was! In 2017, the lifelong friends decided to form a joint-group with handpicked musicians and call it – MASK.

Headed up by Dwayne, Craig and Daz, the Belfast-based band’s raw rock blues sound draws heavily from the 1960s and 70’s – being influenced by the likes of The Beatles, The Rolling Stones and The Kinks to modern day groups such as The Black Keys and BRMC. Mark Millar caught up with Rob ‘H' Humphrey from MASK to talk about the bands' formation and debut album The Famous. 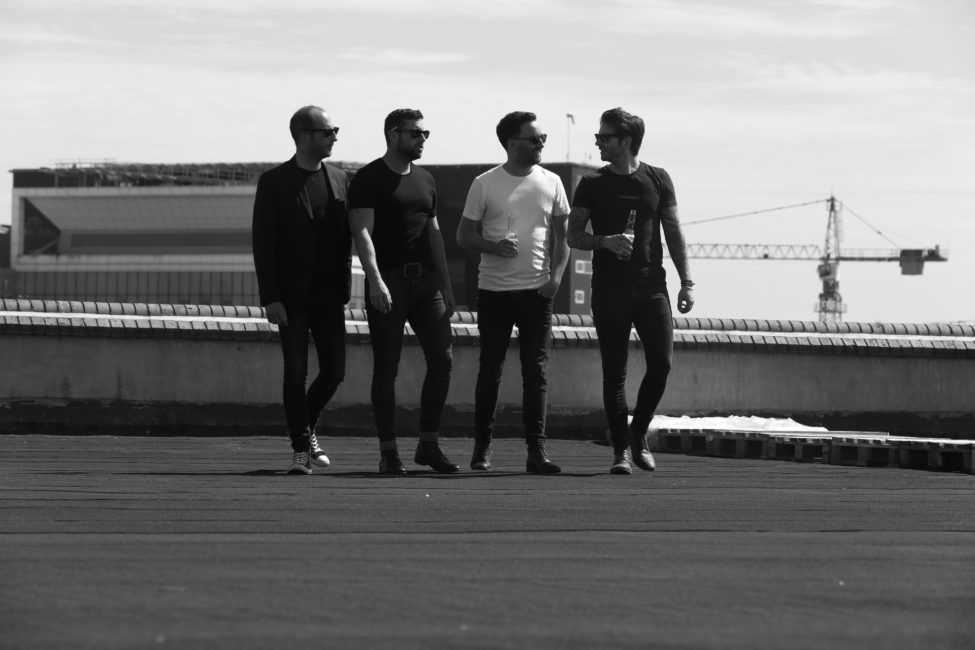 Rob: The goal was never to write or record our own music but more for hanging out/having fun and getting pissed. In 2016 I was forced to quit my day job so I started writing. In 2017 when we had a collection of songs, we recorded and self-produced our debut EP The Truth - we didn’t know if anyone would actually buy or listen to it. Thankfully they did and here we are…

Where does the name ‘MASK’ come from?

Rob: I was in Budapest on the phone complaining to someone about not being able to find a suitable band name and this street vendor held up a musical mask to my face. I sent the name ‘MASK’ to the lads and no one complained… Job done.

MASK recently released your debut album The Famous. Did you go into the recording with any preconceived ideas how it should sound and the kind of songs you wanted to write about?

Rob: I’m going, to be honest here. Recording this album was painful! We knocked up quality demo’s in one week but we could never convert them into the finished article. We lost money, time, effort and patience in this process and it was really 50/50 about whether if we should continue. About six weeks before it was due for release I made the decision to bin half the album and do a re-write. This gave us the fresh impetus and we smashed the album out in a week. As a result, we got a real, raw and powerful sounding album - was totally worth it in the end.

Where did you record The Famous?

What was the band’s songwriting process for the album?

Rob: The best advice I was ever given was to write about what matters. So the lyric is usually something important to me, whether that be a personal story or my outlook on life. I then take that to the band and from there we collectively bring the track to life. The album is called The Famous because at times we are having a go at the celebrity-obsessed culture we live in today. There is a song that really doesn’t belong on a rock/rock n roll album and it’s called Forever Still - it’s easily the saddest story I’ve ever heard. It took as long to get that song right as the rest of the album because it was so delicate and fragile.

Do you think there is a healthy music scene in Northern Ireland at the moment?

Rob: I really do actually. Original music has always been a real struggle here but I feel its gathering pace and there are some really cool rocking bands at present.

The band kindly donated 20% of sales from your EP The Truth to Dementia UK. Was there a particular reason for choosing that charity?

Rob: The opening song on our EP is called I Miss You and it’s about the subject of dementia. My grandmother suffered from the illness and going in and out of dementia homes I picked up on the tragic effect it can have on families. I really don’t feel like the song belongs to me so I decided to donate the money. With every project, we would like to do something good and give something back if we can. The song Forever Still relates to cancer so we played a charity gig last month in Belfast and it was great to raise some cash and do what we love at the same time.

It’s wind down time after a show, what's your go-to listen to unwind or recharge?

Rob: In MASK, we are all father’s so family life takes up the majority of our time. Creating and playing music is a real release for us and we appreciate it more now than ever. I think we are also grateful for the people beside us when on stage. Having been friends for almost fifteen years we have been through every emotion you can imagine together, so we have a real connection.

What is the bands' opinion on streaming services such as Spotify?

Rob: I used to be against streaming but recently I’ve been converted. Now I love it and anything that gets music out there can only be a good thing. Each their own.

Rob: I had to go into my phone here and the most played song is Gimme Shelter by The Rolling Stones - Great Song.

Rob: Thinking locally (Northern Ireland) I would say the Bonnevilles, Amy Montgomery and The Wood Burning Savages. We were fortunate enough to have Andy from the Bonnevilles play slide guitar on one of our songs called Hurricane - they're definitely my favourite band live from this country. Further afield - I like the Stone Foxes, Jack Broadbent, Radio Moscow and White Denim. I’m still finding amazing music from the likes of Brain Auger though that blow me away.

Rob: Without a doubt to play live and to make the contacts who can help us get to as big a stage as possible. We have planned to play up to four shows a year in Belfast and we are very keen to play festivals this summer. A UK tour is being talked about and hopefully, it will happen. We sell more music in the US than anywhere so we would love to get stateside at some stage.

Thanks very much, Rob.

Rob: No thank you - we love your content and are honoured to catch up with you.

MASK will play Voodoo in Belfast on Saturday, March the 9th.

Niall Horan has confirmed a return to Belfast as part of his ‘NICE TO MEET YA’ Tour with a Show at the SSE Arena on 27 October 2020. Having played the world's biggest stages and...

Today, Conor O'Brien is pleased to announce Villagers' fifth studio album Fever Dreams which will be released on August 20th via Domino. Escapism is a very necessary pursuit right now, and Fever Dreams follows it...