Two years on from her blistering debut ‘A Suitable Girl,’ Australian singer-songwriter Ali Barter has announced her triumphant return with ‘Hello, I’m Doing My Best’ – a revealing collection of songs that track her most formative relationships: to her body, her instincts, sobriety and the old vices it counteracts, and the people she loves most. In support of the record Ali will play live in Belfast at a date to be announced very soon. Mark Millar caught up with Ali to talk about the new album and upcoming Belfast show. 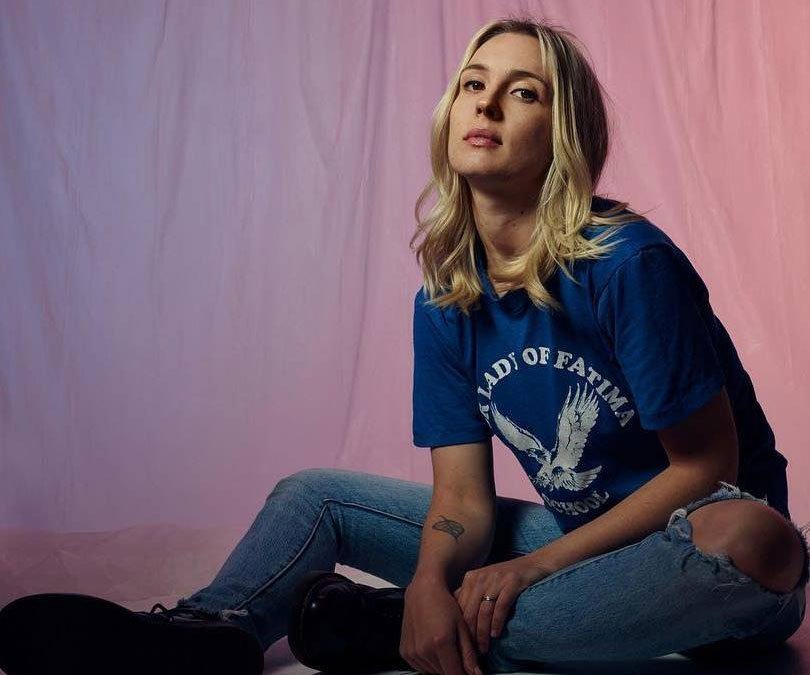 Hi, Ali, can you remember when you first discovered your love for music?

AB: There was always music in my house growing up. My mum loved Patsy Cline and Fleetwood Mac but it was really my dad who played the most music. It was usually Frank Sinatra records and musicals, so I have memories singing ‘On My Own’ from Les Miserables in the mirror when I was very young. Music has always been my greatest passion.

Who were your musical influences growing up?

AB: I loved The Spice Girls and Sheryl Crow as a kid and then I moved on to Oasis and the Foo Fighters in my teens. I loved music with a strong melody and big anthemic choruses. I later discovered Cat Power and Liz Phair and found female songwriters and performers that I could relate too and emulate.

I hear you will play a headline Belfast show at a date to be announced very soon. Are you looking forward to playing to the Belfast crowd?

AB: SO EXCITED. I have always wanted to travel to Northern Ireland as I have family from that part of the world and some of my favourite music comes from there too. Can’t wait!

How are you enjoying the European leg of your tour so far?

AB: It’s been really great to play to new audiences outside of Australia. The response has been really warm so I’m very happy to be building my audience over here. I can’t wait to do more once the record is out!

You release your second album ‘Hello, I’m Doing My Best’ on October 18th. Did you go into the recording with any preconceived ideas on how it should sound and the kind of songs you wanted to write about?

AB: I wanted this record to be less polished than the first one. More ‘band in a room’ style. I listened to the Weezer record ‘Pinkerton’ and lots of The Breeders. I wanted to have more space and fewer tracks, fewer guitars, and vocals mainly. I was intentionally writing songs that were more fun but the subject matter remained very autobiographical and honest. More so this time. Some of the topics are very raw.

What is your songwriting process for this record?

AB: I started out alone, getting my new ideas and intentions out, then I wrote with Oscar, my husband, and producer of the record to develop the sound of the songs. I also spent some time overseas writing with people I have written with before. I enjoy being out of my comfort zone when writing. It’s when all my feelings come up. When I’m home with all my safety nets, I don’t really write. I need to be lonely or scared or stressed to write.

Your debut LP ‘A Suitable Girl’ was critically and popularly acclaimed, but you rejected it afterward saying, “it’s too polished, and my voice is too high.” Did you feel any pressure going into the new record?

AB: No, because I had to let that go last time around. I made myself miserable. This time my mission was just to make songs that I like. I was more rejecting myself as a person, rather than my last record. I had to come to a place where I was happy with myself first before I came back to music. A place, I’m glad to say I’m now at.

I enjoyed the video for ‘Backseat’- it looks like you had a lot of fun making it with your husband, Oscar Dawson. Where did the idea for the song and video come from?

AB: I don’t really write love songs, but this cute (and true) story about how I admired Oscar from afar came out one day when I was writing. I had been listening to the Breeders ‘Do You Love Me Now’ and I was in the mood for a bit of love. And I wanted the video to be like True Romance meets Misery – you know the one where Kathy Bates is obsessed with James Caan and she traps him and injures him so he can’t escape. My video is a little less intense, about two people who fall in love but are a bit clumsy and end up hurting each other. Kinda like love. It can hurt.

You have supported The Rubens, The War On Drugs, The Jezabels, Stevie Nicks, The Preatures, Chrissie Hynde and Liz Phair. Have any of these acts offered you advice on the music biz?

AB: No advice directly but I definitely loved touring with Liz Phair. She was just a cool chick and played great songs with no bullshit. And Chrissie Hynde was the same. She played solid and true like it was just another show. It’s a job, you just get out and do it each night.

If you could change anything about the music industry, what would it be?

AB: I guess it’s very expensive to play music when you start out so that’s the thing I struggled with the most. It would be great if there was more support for artists and musicians.

AB: My favourite part would be creating music – writing and building songs. And then, touring is super fun but can be really gruelling. But all in all, it’s a bloody awesome job and I’m very grateful I’m in a position to do it all over the world.

Do you have a favorite record that you always return to?

AB: (What’s The Story) Morning Glory? by Oasis will never get old for me. Such incredible songs and it reminds me of being a kid. It takes me somewhere special.

AB: I’m obsessed with Lizzo so her record ‘Because I Love You’ is my go-to at the moment. So uplifting and empowering. She is a QUEEN.

Hello, I’m Doing My Best is out October 18 on Inertia Music / [PIAS]. Pre-order it at alibartermusic.com.

US Rock band CLUTCH are pleased to announce a headline Belfast show at The Limelight 1 on Tuesday 21st July 2020. The band recently released “Fortunate Son.” The single is the fourth in a series […]