Interpol today announce new EP ‘A Fine Mess’, which will be released May 17th on Matador Records. The announcement comes with new track ‘The Weekend’, which is available to hear below.

Recorded during time spent in upstate New York with Dave Fridmann, the five songs that make up A Fine Mess gradually emerged as a body of work with a narrative and flow unto itself. The title track, and BBC 6 Music-playlisted single ‘Fine Mess’, then received further production from Kaines & Tom A.D. and mixing from Claudius Mittendorfer, who had first worked with Interpol as the engineer on Our Love To Admire.

The resulting set is a living, breathing postcard from the band to their fans as they tour the world throughout 2019, and a linear continuation of the visceral and contagious energy set loose with Marauder.

Listen to ‘The Weekend’ – BELOW:

Echoing its title, the artwork for A Fine Mess is illustrated by a series of lost images, recovered from an abandoned police station in Detroit, MI. In a crumbling evidence room – amongst the rubble – an undeveloped roll of film, dated “1-20-96”, featured latent images of a breaking and entering scene, the rooms in chaos.

From the beguiling refrain of the title track, to the soulful topsy-turvy of ‘No Big Deal’, cathartic chorus of long sought-after live favourite ‘Real Life’, anthemic swell of ‘The Weekend’, and angular shades of ‘Thrones’, A Fine Mess is a bracing and distinct entry in Interpol’s oeuvre.

Following recent headline performances at Madison Square Garden, Hollywood Bowl, Sydney Opera House and a double header at Royal Albert Hall, Interpol will continue their worldwide run of dates with festival appearances at Primavera, All Points East with The Strokes, Best Kept Secret, headline dates across South and North America, the UK and Europe, with more announcements to follow. The current set of upcoming dates can be found below. 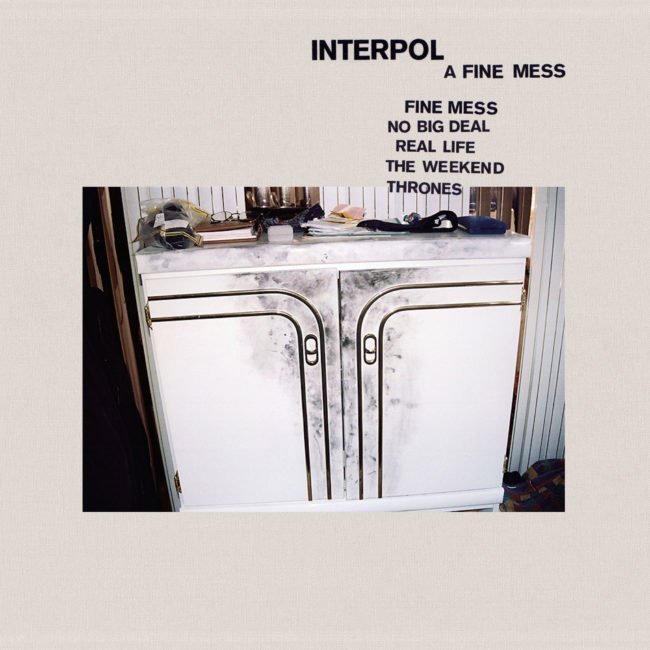 Muzz, the new project of Paul Banks (Interpol), Josh Kaufman (Bonny Light Horseman), and Matt Barrick (The Walkmen), will release their self-titled, debut album next Friday on June 5th via Matador. Today, they unveil a […]

In 2014, the remaining band members of Interpol displayed their resiliency with the release of the luminous “El Pintor”. Many in the music world had believed that with the departure of founding member Carlos Dengler, […]