It was all leading to this. The definitive Enter Shikari album ‘Nothing Is True & Everything Is Possible’, released 17 April 2020 through So Recordings. First single ‘{ The Dreamers Hotel }’ premiered as Annie Mac’s Hottest Record last night. The band will play 5 special intimate UK shows to launch the album. Details below.

‘Nothing Is True & Everything Is Possible’ is produced to dazzling effect by renowned frontman and visionary Rou Reynolds, from a band at the peak of their creative output with a unique story, underlining their 13-year succession as a pioneering and uncompromising musical force. This is an album about possibility, the unnerving irony of endless possibility, the band asking themselves what they can achieve as the world questions “what is possible?”.

’Nothing Is True & Everything Is Possible’ is a lucid soundtrack for a new decade, with a poignant social commentary that expertly leads the listener from pure pop to scorching punk-rock fury, through four-to-the-floor beats and beautiful orchestral composition. ’Waltzing Off The Face Of The Earth’ (I. Crescendo) and (II. Plangevole) draws you into the madness of modern life, “you can’t trust your own eyes, and you only hear lies, our future’s been denied and there’s nowhere to hide now that nothing is true and everything is possible.” ‘Elegy For Extinction’ is a classical gem recorded in Prague with the City Of Prague Symphony Orchestra, and arranged by renowned film & television soundtrack composer George Fenton (Gandhi, Blue Planet, Planet Earth, Groundhog Day, My Name Is Joe), and the first single ‘{ The Dreamers Hotel }’ a lavishly produced anthem – listen BELOW:

The inspiration for ’Nothing Is True & Everything Is Possible’ came while putting together their book ‘Dear Future Historians’ published by Faber, which charts the lyrical creativity of the band. Reynolds comments:

“Looking at all we had achieved, gave us a better sense of perspective and confidence……. What are we capable of? What is possible? These questions are part of Shikari’s DNA. But now we reflect a society where possibility itself has drifted from something of optimistic opportunity to something quite frightening.”

Rou Reynolds is post-punk’s renaissance man; a musician, producer, composer, published author, and campaigner, who has spent much of the last few years as an advocate of mental health charities following his well-documented struggles on Enter Shikari’s critically acclaimed album

The last decade has seen Enter Shikari increase their stature year on year, a rare career story which has taken them to 4 Top 10 albums, millions of streams, huge sell-out world tours (most recently in Russia and two American), as well as multiple awards, last year crowned Best British Band by Rocksound, with Best Album from Kerrang! for ‘The Spark’ at 2018’s Awards. 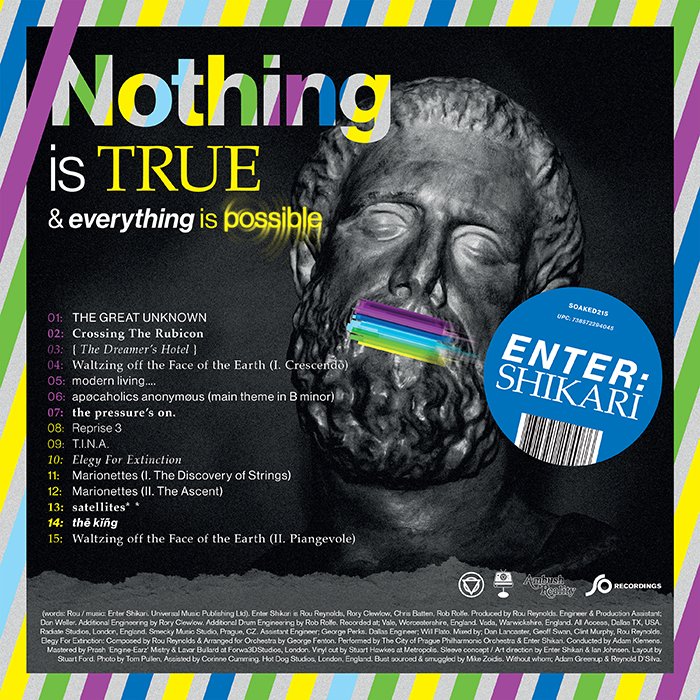 ’Nothing Is True & Everything Is Possible’ tracklist:

Tickets will be available to those who pre-order the album from the online band store and to members of the band’s Future Historians fan club.

Since 2009, at around the same time as The Brit Awards, large and acclaimed artists including, Ed Sheeran, alt-J and Rag ‘n’ Bone Man have played in small, intimate venues raising vital funds and awareness […]

Last night, Enter Shikari unveiled a second track, ‘The King’, taken from their anticipated album ‘Nothing Is True & Everything Is Possible’ released on 17th April 2020, through So Recordings. ‘The King’ fuses breakbeat tempo […]

ALBUM REVIEW: Enter Shikari – Nothing Is True & Everything Is Possible

Beyond having a tenacious work ethic evidenced by Enter Shikari’s gruelling 2019 tour schedule (including their War Child show at The Dome) and releasing the standalone single “Stop the Clocks”; Enter Shikari’s strongest characteristic is […]