EMERGE Music Festival is a brand new annual two day multi-stage outdoor event brought to you by the teams behind the long-running Belfast club brand Shine & Belsonic Festival, taking place for the first time this August Bank Holiday in Belfast. Combining the cutting edge of world-class international electronic artists, and the wealth of fantastic new talent consistently coming out of the burgeoning Irish market, Emerge will be the largest event of its kind in Ireland, with a capacity for 20,000 attendees per day.

In it’s first year over 40 acts will appear across three stages, over two days. Bespoke Sound & Lighting / AV installations will feature across all stages, with an emphasis on a world-class audience experience.

“The electronic music scene is one that has grown steadily in Belfast over the 30-odd years that I’ve been promoting in the city with my Shine brand, and it's grown exponentially over the last few years. Belfast is one of the most fertile and dynamic scenes of its kind in the UK or Ireland. We’ve promoted many large scale outdoor electronic events in recent years but always wanted to do a huge multi stage event of this kind. Feedback from our audience suggested that a huge appetite exists for a unique production of this kind in Northern Ireland. We’re lucky to have some of the world's biggest names in dance music on our inaugural lineup of EMERGE Music Festival, most of whom we’ve been working with since their very first club shows in the country.” 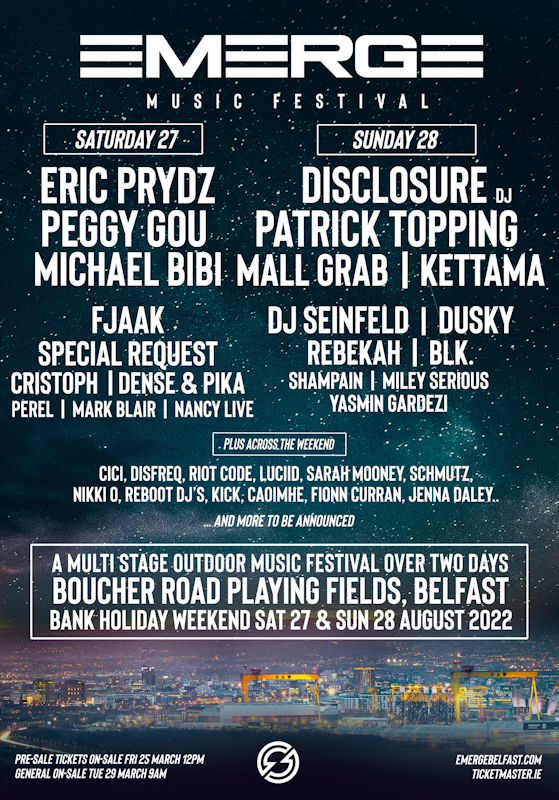