If one is interested in finding out more about the Paul is Dead (P.I.D.) conspiracy theory Paul is Dead: When The Beatles Lost McCartney is not the best place to start looking. Paul is Dead does not mention that the rumour about McCartney’s death in November 1966 (when his car was involved in an accident) only began in 1969 with the release of Abbey Road. Fans looked to the album cover and interpreted The Fab-Four’s crossing as a funeral procession where John Lennon is dressed in white as a preacher whilst Ringo was dressed in black as the undertaker.

From Abbey Road, The Beatles fans then looked retrospectively for other clues.  On the 1968 The White Album it is alleged that just when “I’m So Tired” ends and before “Blackbird” begins, when played backwards, Lennon can be heard uttering “Paul is dead man, miss him, miss him”. One year earlier the Sgt. Pepper’s Lonely Hearts Club Band LP shows a picture of Paul McCartney with a patch on his arm with the initials “O.P.D.” This was assumed to mean officially pronounced dead but was actually an abbreviation for Ontario Provincial Police.

Paolo Baron and Ernesto Carbonetti did not write Paul is Dead: When The Beatles lost McCartney to introduce the conspiracy theory or to delve into the clues or the alleged evidence of McCartney’s death; the duo wrote this graphic novel as storytelling the immediate events before Paul’s supposed death in November 1966, how The Beatles reacted to it and how they carried on afterwards for the next few months.

Paul is Dead: When The Beatles Lost McCartney sees a concerned (and LSD using) John discussing Paul’s recent behaviour. Lennon complains that Paul freaked out and overreacted when he walked into the Abbey Road studio and found John hung upside down with a rope in an attempt to perfect his vocals (to sound like a Tibetan monk chanting over a mountain) for the track “Tomorrow Never Knows”. Two days later Paul is pronounced dead. The Secret Service has stepped in and they have “gotten rid of the car and the body”. Paul’s death is declared a national security issue because if news of this gets out “Thousands of young people will end up killing themselves”. 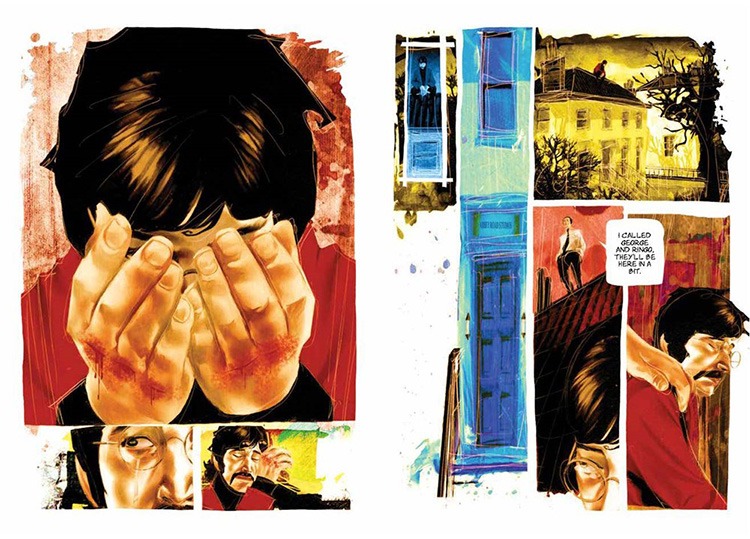 Whilst news of Paul’s death is concealed from the public the three remaining band members are told. Ringo questions if Paul’s death was a suicide which is dismissed by John who suspects foul play as on the evening of his death McCartney was “clearheaded” and no skid marks were found on the road where Paul crashed. John, George and Ringo decide to break into Paul’s house to look for clues.

One of the good things about Paul is Dead is that (as genius as the majority of them are) it does not overly rely on referencing The Beatles lyrics. “Fool on the Hill” and “I am the Walrus” lyrics are proportionately used to explain Paul’s loneliness and how he is part of “a machine for making money and John’s LSD trip. Also, Baron and Carbonetti (whilst celebrating the band) deftly allow The Beatles to be taken down a notch when an unknown band (who Ringo thinks are called The Pink Fluids (Pink Floyd)) pass them in Abbey Road to get to Studio 3 tell The Fab-Four their perchance for The Rolling Stones.

Baron and Carbonetti deserve credit for attempting to create a credible story of Paul’s death and how he was replaced in The Beatles when any evidence supporting this ever happened has been disregarded. Paolo himself in the epilogue uses his own knowledge of The Beatles to dismiss the notion that Paul died and was replaced by comparing McCartney’s death to saying that “Diego Armando Maradona won the World Cup in 1986, then died and was replaced by a double who won two championships for Napoli, then the UEFA Cup…”

In order to create the story, Baron and Carbonetti used fiction such as Geoff Emerick (sound engineer at Abbey Road Studios) unrealised idea to hang John upside down. On occasions the timeline of events is incorrect. For example “Tomorrow Never Knows” was taken from Revolver which had already been released in August 1966 so why would John be working on this track in November 1966.

Nonetheless, Baron and Carbonetti have created an original work of fiction without borrowing from The Beatles themselves which features not just The Fab-Four but also their sound engineer Geoff Emerick, their manager (until his death in 1967) Brian Epstein and George Martin (aka Big George) who produced and arranged most of The Beatles studio tracks. Paul’s girlfriend at the time Jane Asher is mentioned too.

Paul is Dead: When The Beatles Lost McCartney can be purchased here.

One of the many highlights of John Lennon’s Imagine – The Ultimate Collection, the immersive and intimate super deluxe edition of his legendary solo album, released this past October on what would have been his 78th birthday, were the Raw […]

On April 18, 2020, one of the greatest solo debuts in rock history, Paul McCartney’s McCartney, will receive a special 50th-anniversary release in a limited edition half-speed mastered vinyl pressing for Record Store Day. Originally […]

As this crazy year comes to a close, Ringo is offering a song of peace, love and friendship – “Here’s To The Nights” available today as a single with the video coming Friday, December 18. […]