MCD Productions confirm that BELFAST VITAL will return to Boucher Road Playing Fields on Saturday 25 August – tickets on sale this Friday at 9 am.

The World’s Number 1 DJ MARTIN GARRIX will take to the BELFAST VITAL main stage for what promises to be a phenomenal headline set. Garrix will be joined by very special guests: dance music icon STEVE ANGELLO, Swedish singer and songwriter ZARA LARSSON and explosive new popstar Loop on August 25th – the last Saturday of the summer!

Over the past few years Martin Garrix has established himself as a behemoth in both the electronic and pop worlds. If 2013 was his breakthrough year, 2016 and 2017 were the years in which he staked his claim as more than a dance music A-lister. The synergy between his incredible studio work and the explosive energy of his shows is undeniable, and has propelled him to the #1 spot on DJ Mag’s Top 100.

Garrix has become one of electronic dance music’s youngest superstars, amassing a chart-topping, high-streaming musical legacy along the way. Martin’s move into the world of pop and the mainstream at large should come as little surprise. His debut Animals went to No. 1 in the UK, a true crossover track that was created with nothing more than the dancefloor in mind. He quickly embraced his appeal to the wider world; collaborating with megastars like Tiësto, Avicii, David Guetta and Dua Lipa. Most recently he released another stunner of a single: So Far Away featuring David Guetta, Jamie Scott & Romy Dya.

Martin Garrix performs at the biggest festivals in the world from Coachella and Lollapalooza to Ultra Music Festival and Tomorrowland and will now perform along with special guests Steve Angello and Zara Larsson at Belfast Vital. 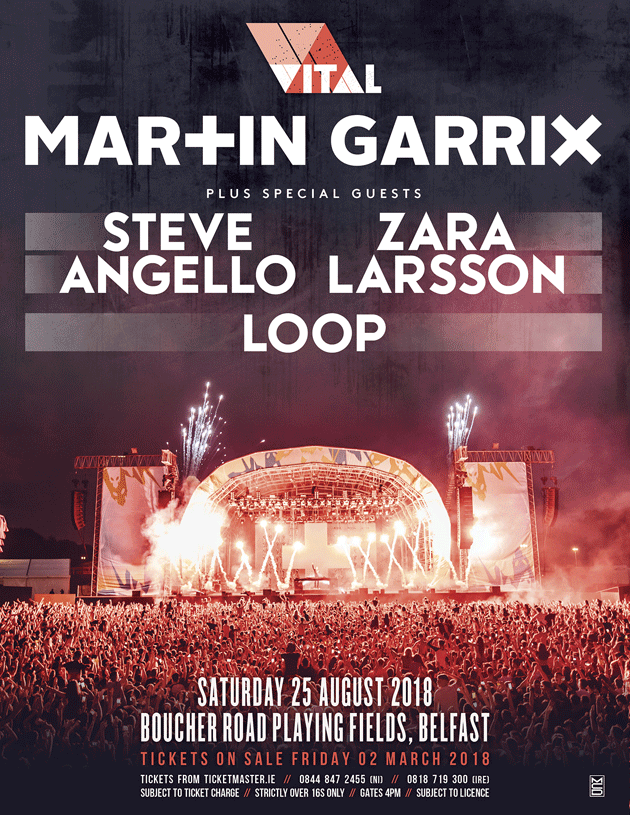 Do not miss MARTIN GARRIX with very special guests STEVE ANGELLO and ZARA LARSSON when they return to Northern Ireland on Saturday 25 August – tickets on sale this Friday at 9am:

The Killers have announced a HUGE Belfast show at Boucher Road Playing Fields on Friday, 1st September 2023, with special guest Johnny Marr. The Las Vegas band returns to the city for the first time […]

Following their HUGE performance at Longitude Festival at the weekend, Irish urban pop trio Chasing Abbey is pleased to announce their addition to the Belfast Vital line-up on Saturday, August 25th. The World’s Number 1 […]