Hot on the heels of announcing their Nov/Dec 2021 US touring extravaganza with Evanescence, US rockers HALESTORM are delighted to confirm new tour plans for the UK/Europe in Feb/Mar 2022, including a headline Belfast show at the Ulster Hall on Saturday 05th March 2022.

Tickets on sale Friday at 9am from ulsterhall.co.uk & ticketmaster.ie  14+ show / Standing 16+

The shows will be “An Evening With...” performance in smaller than usual venues, making the band’s patiently awaited return to the stage an intimate and special experience, both for fans and themselves.

Powerhouse frontwoman Lzzy Hale enthuses, “We are so excited to announce our upcoming Evening-With tour of the UK & Europe this February through March 2022! That’s right, All Halestorm, all the time! A collection of up close and personal shows where we will be performing deep cuts, all the fan favourites, and even some brand new songs! Come join us! Tickets go on sale this Friday, June 18th!

Though not able to tour during the pandemic, the band have kept busy working on new music and exploring other creative avenues. Lzzy Hale is the official host of AXS TV’s now airing A Year In Music seasons 3 & 4, recently featured in Two Minutes to Late Night’s women-centric cover of Pantera’s Mouth For War, has participated on Rebel in The Picturebooks’ Major Minor Collective project (alongside Clutch’s Neil Fallon, Black Stone Cherry’s Chris Robertson, and Refused’s Dennis Lyxzen), and will soon be a judge on Hit Parader’s forthcoming reality music competition TV series No Cover, set to air on Amazon Prime.

To date, Halestorm’s catalogue encompasses two gold singles “Here’s To Us” and “I Get Off,” two gold albums Halestorm and The Strange Case Of…, and one platinum single “I Miss The Misery”, in addition to streams in excess of a half-a-billion—all unprecedented accolades for modern rock. They logged two back-to-back Top 10 debuts on the Billboard Top 200 & UK Official Album chart, namely Into The Wild Life [2015] and Vicious [2018]. Among a pair of nominations, the musicians notably scored the 2013 GRAMMY® Award for “Best Hard Rock/Metal Performance” in recognition of “Love Bites (So Do I)”. The latter smash affirmed the quartet’s place in the history books as “the first female-fronted band to hit #1 on the Active Rock radio charts.” Halestorm was also named Loudwire’s “Artist of the Decade” in 2019. In addition to selling out shows worldwide, they shared stages with the likes of Eric Church, Joan Jett, Avenged Sevenfold, Alice Cooper, Rob Zombie, ZZ Top, Heaven & Hell, Evanescence, and Judas Priest, to name a few. 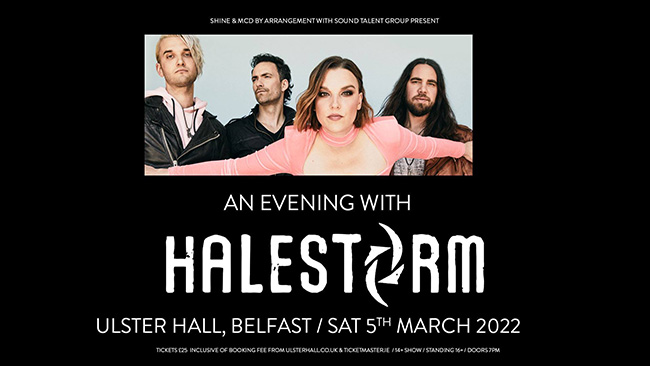 ‘An Evening with Halestorm’

Tickets on sale Friday at 9am from ulsterhall.co.uk & ticketmaster.ie  14+ show / Standing 16+

IN FOCUS// The Kooks - Limelight I, Belfast

THE KOOKS played an amazing show at Belfast's Limelight 1 on Monday night showcasing songs from their much-awaited fifth studio album, Let’s Go Sunshine which was released on Friday.  Clair McAllister was on hand to take these fantastic...

UK rock band RIDE plays a headline show at the Limelight 2 on Friday 07th June 2019. The bands most recent album release ' Weather Diaries' is the fifth studio album by the English rock...

Queen Extravaganza, the official Queen tribute band produced by Roger Taylor and Brian May, returns to Belfast in 2021 following their sell-out shows across the globe. Queen Extravaganza will be celebrating 50 years of Queen...