Un, Deux, Trois… Lolla! XS Noize heads to the third French edition of the global phenomenon that is Lollapalooza

It all began in 1991 as Perry Farrell’s grand farewell to Jane’s Addition via a tour featuring an eclectic cadre of special guests. The festival travelled, disappeared and came back in 2005 to Grant Park in Chicago where it has thrived ever since. International editions complemented the sweet home Chicago gathering beginning in Santiago, Chile in 2010. Additional South American countries joined the party and Europe would chime in via Berlin beginning in 2014.

Paris is the newest and 7th planetary member of the Lolla club for the third year running. Lolla Paris promises a lineup that features the only gigs in France in 2019 for a number of bands including Sunday headliner the Strokes, The 1975, Biffy Clyro, Kodaline, and Judah and the Lion. XS Noize will be live-tweeting from these sets and more, with an eye toward discovering and sharing a few French talents, too. Please join us for this weekend’s rendez-vous extraordinaire at the Longchamp Racetrack. Merci et vive le rock! 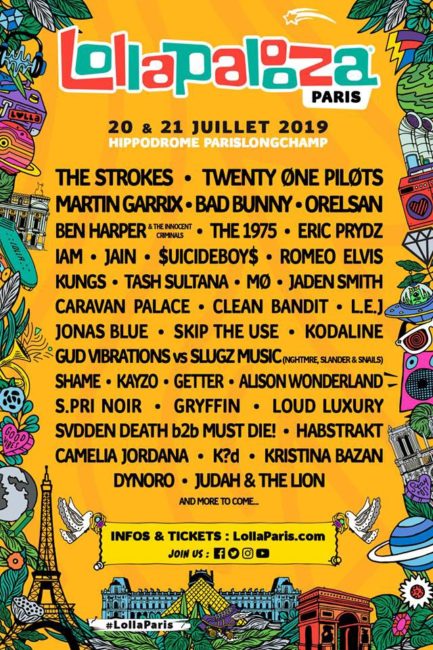 Mozart was not Parisian, let alone French; he was German. Mozart’s time in Paris was brief (lasting just over six months in 1778) and for the most part was miserable. His most reputable works including […]